Clan Wars is an Activity open to both Freeplayers and Members, located in the Gamer's Grotto. In this game, two teams of players war against each other in various terrains, and the last team standing is victorious.

Clan Wars can be found in the Gamer's Grotto located just north of Falador, and there are three main methods of getting there.

You can use a Games Necklace to teleport to the Gamer's Grotto. From there, enter the portal to the Clan Wars arena.

The Gamer's Grotto is located just north of Falador. It is directly east of the Falador lodestone. Simply walk there along the road north of the city. There is also an Agility shortcut on the northern wall of the city which requires use of a Mith Grapple to climb over. This shortcut will bring you outside the Gamers' Grotto.

Bring the best armor you have. If you have anything you cannot afford to lose, make sure that items are kept upon death before every war. If you are willing to bring food, you should pay attention as well. Don't bring food unless it can be used in the war because its weight will slow you down. Some ammo is returned to rangers after the war ends if they have an open inventory space.

In clan wars, there are a number of different ways you can war with opposing clans. Once you challenge someone in the lobby, a menu will show, showing you several different ways to war (Considering if you are a lieutenant in the clan you are in or above). You right-click on a player, and within all the normal options, there will be a Challenge option. Click this, and if they are lieutenant or higher, this will happen.

And if they accept, this will then come up. 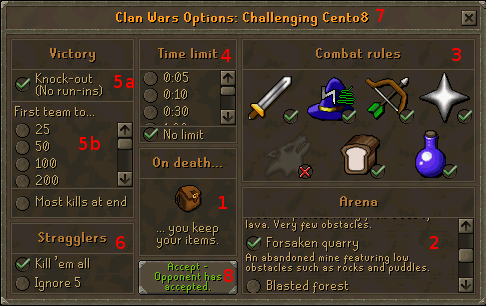 2. You can exchange battle with the opposing clan on 5 different terrains.

3. There can be certain rules set in place which enables or disables you to use certain advantages. From clockwise, they are: Melee, Magic, Ranged, Prayer, Potions (or "Pots"), Food and Summoning.

4. There can be a time limit set in place, in which case, when you die, you can exit to the lobby, then run back into the clan war! This method is called "Zombieing". No time limit means that once you die, you're out for good, or it could mean to a certain number of kills, all of this information seen in the next number.

5a. This button, toggled, means that when you die, you're out of the clan war.

5b. This time limit means the clan with the greatest number of kills wins.

6. This will ignore 5 people in the terrain, instead of killing every single last one.

7. This is the lieutenant/general/owner of the clan you are warring against.

8. If the other person accepts, then when you click it, you will be sent straight to the Clan War.

There are 5 different terrains, all with different obstacles.

This terrain is from the old clan wars, which was the one and only terrain you could choose from. It has lava pits, dead trees and a dull, erie sense about it. It is quite large. 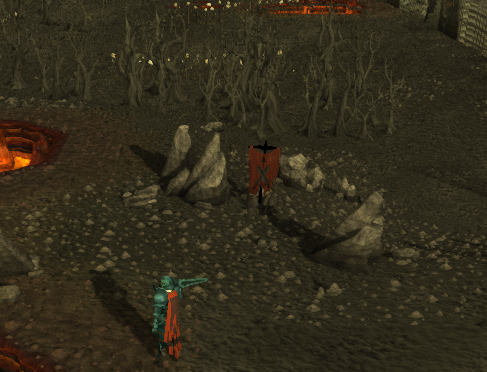 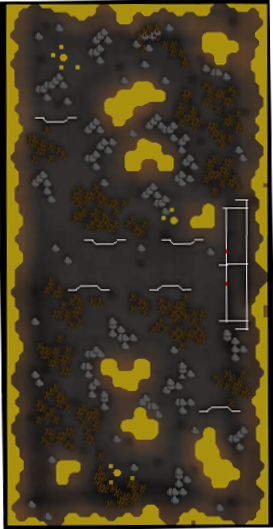 This terrain is covered in dead trees, making it difficult to follow your opponents. There isn't much else to see. It is fairly normal in size. 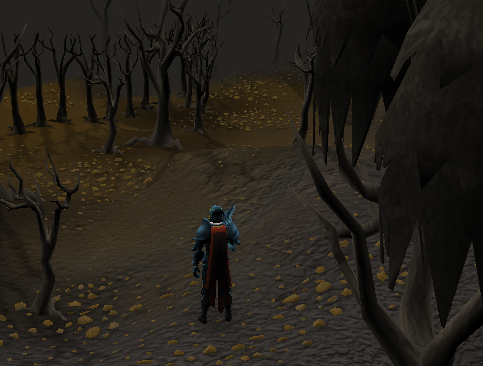 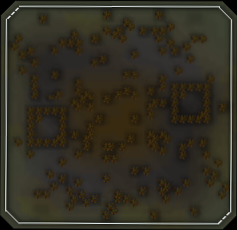 This is by far the easiest terrain, although, it give no help to rangers or mages whatsoever. There are barely any obstacles, and it is fairly normal/small. 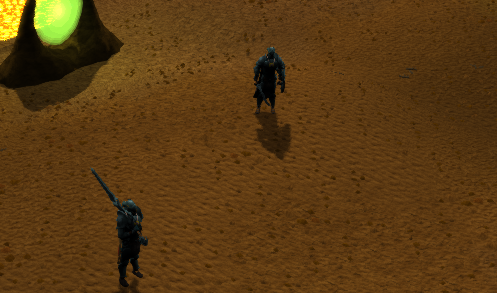 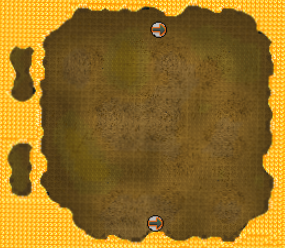 This terrain is an abandoned mine, complete with stray ores scattered among the dirt. It is normal in size. 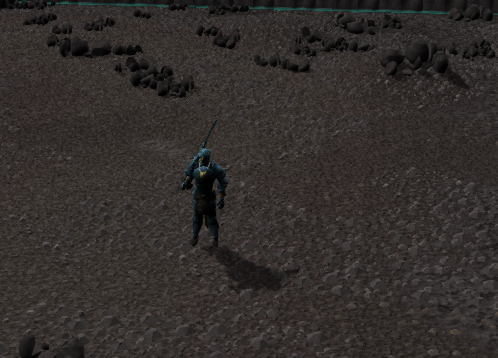 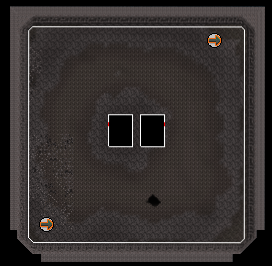 This terrain is worthy for a real battle, considering all the Turrets and passageways. This is by far the biggest terrain. 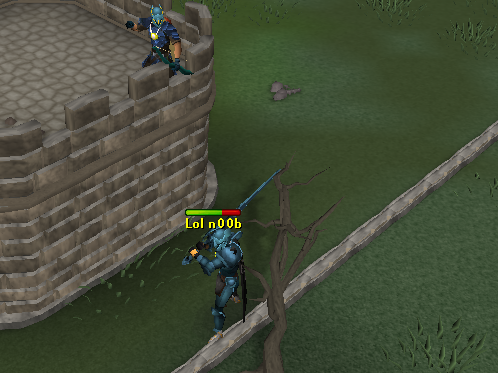 If you are in the clan, but didn't challenge anyone, you will get a message that you have 2 minutes or less to enter the field or you will not be able to participate in the war.

Once you are in one of the playing fields, you will notice an arrow pointing to the wall in the center of the field. Once you get there, you will need to wait until the 2 minute counter counts down until it gets to:

Will then move sink into the ground and you can go forth and battle. You can be attacked by multiple players or attack with your allies.

If you die with the option "Lose Items" on, you will lose items which are useful to the other player, i.e. runes, arrows, food, potions etc.

Generally speaking, in a clan war it is best to have as many people as possible attack the same person. This is known as piling. Not only does this eliminate that person quickly, ensuring they cannot do damage in the future, it increases the chances they will be killed without consuming all of their food, or KOed. Usually a single leader decides who to attack after each kill. Lower levels should be attacked first because they tend to have lower defense, making them easier to kill. You could also choose to attack mages first if you realize your clan is weak to magic, for example.

Use your surroundings to your advantage! If you are attacking with magic or range, climb atop turrets to shield yourself from melee attacks. If you are piled (see above), use walls, trees, and other obstacles to prevent the pilers from attacking you, and once you do this run as far away as you can in order to lose them. This is known as hugging and dragging, or simply tanking. If you are piled, the very least you can do is run around frantically and eat. This will at least drain your opponent's run energy.

If you kill all other people on the team, have the greatest number of kills within the time limit, or reached a certain number kills, you won! If the other clan beat you in any of those ways, you lost.

If you win, a message will come up, saying this: 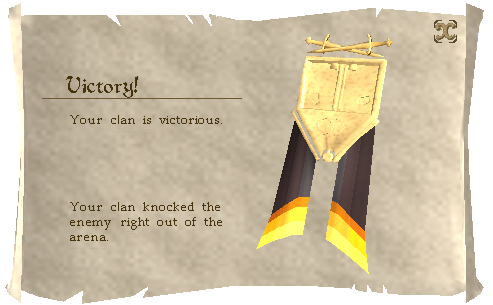 If you lost, a message will come up, saying this: 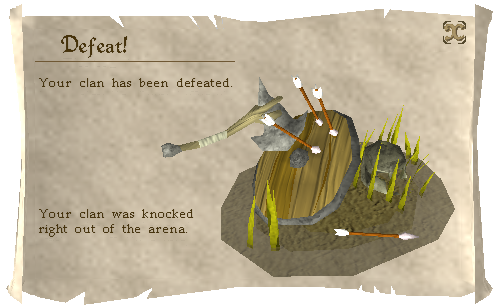 Free for all is a very quick and exhilarating Activity, in which 1-1 pvp combat takes place. It is a lot like the old Wilderness, but with a few changes, including: No Wilderness ditch, Only 1-1 pvp.

Here is the map for both the free for all and dangerous portals. 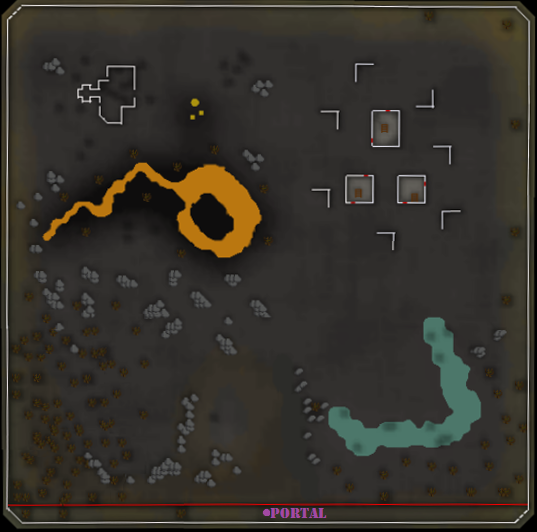 Once you go into the Safe portal, you will notice on top of the screen a sign.

There is a clear line in the ground, going east to west. Once you go across the line, you can attack or be attacked by anyone. There are no level difference barriers. Longbows can be used by Rangers to shoot opponents on another tower. Once you die, you come back just outside the white portal, in the Clan Wars lobby, not losing any items.

The first thing you will notice is that the portal is red. If you click on it, a warning sign will come up: 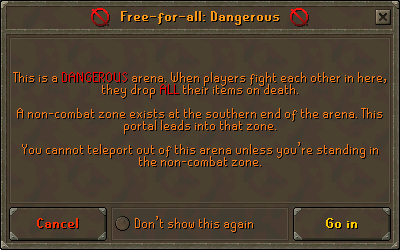 It is identical to the Safe arena, but you will lose your items if you die. If you are close to death, you can go back across the line and you would be safe. It is recommended that you bring items that you would not mind losing, and food is also recommended. A gravestone will not appear if you die.

Don't take clanning too seriously. It's just a game; remember that! Happy clanning! 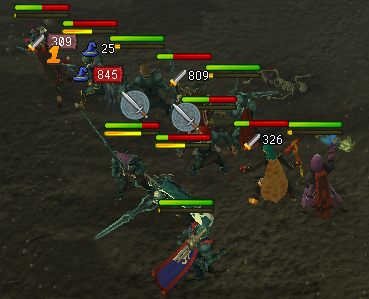