By: Hawk
Special Thanks to: As, Damaged500, Egghebrecht, I am TD, Moneylover, Roy, Samsara
Original Guide by: Zombie Kid90

The Duel Arena is a great place to fight if you want to fight another person without losing your items. The main fights are for all players, but the tournaments are for members only. You set your own rules, whether or not you want to be able to use certain combat types, or even add obstacles to the terrain. You can also stake money and items against other players. If you win, you will be a little bit richer, but if you lose, you lose all the items that you staked.

To get to the Duel Arena, either teleport to Lumbridge with the Home Teleport or Lumbridge teleport. You can also use an Amulet of Glory to teleport to Al Kharid and walk north from there. If you take the Abyss to the Fire Altar, you can step out of the altar and go south to the entrance. You can also use a Ring of Duelling to get to the entrance. 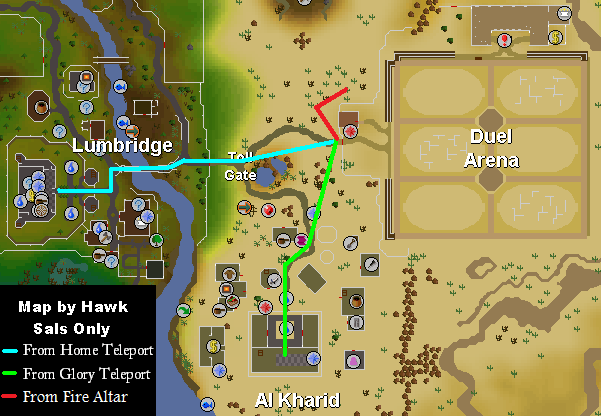 The bank is located on the eastern side of the Duel Arena, in an area with two chests. The chests are the banks. In that area, you will see a man named Fadli, who will sell you rotten tomatoes for 1gp each. 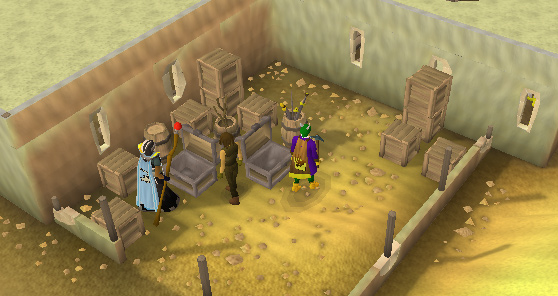 The altar is located just north of the bank. 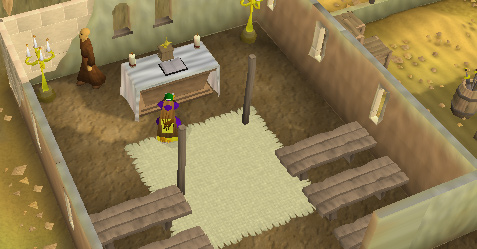 At the hospital, you can get healed by anyone there. You can also buy the Constitution Skillcape.

When you first arrive at the Duel Arena, you will notice an icon in the bottom right hand corner, which means that you are able to challenge someone.

If you want to fight, right-click on someone and select the "Challenge Player Name." If someone challenges you, you will receive a message saying who is challenging you and what type of duel they are requesting.

When you challenge another player, a window like the one below will pop up. 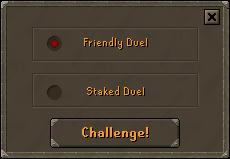 Choosing "Friendly Stake" will open up a window listing rules, but no stake section. These duels are just for fun. Choosing "Staked Duel" will open up a window listing rules and a section for staking. The max amount of gp someone can wager depends on the amount of quest points both players have. The person who has the lower number of quest points sets the limit. For example, if Player 1 has 160 quest points, while Player 2 has 120 quest points, the limit for staking would be 15,600 gp.

If you want stake any items (you don't need to), be sure that you aren't afraid to lose them in the event that you should lose the duel. Any items staked will be lost to the other player. 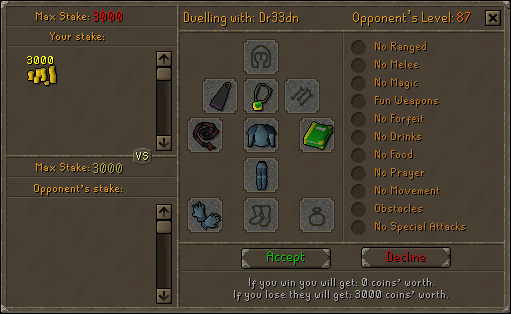 There are many rules that you can set to make the duel more interesting when turned on:

After accepting these rules, you'll see a confirmation screen of anything being staked, as well as the options that have been agreed upon. Double check these and then select 'Accept' to begin the duel! 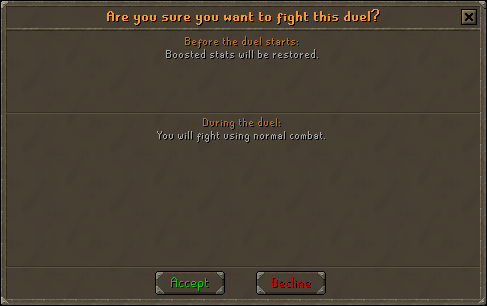 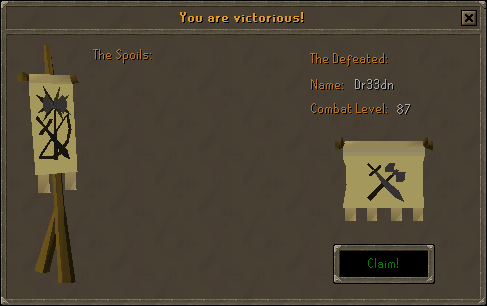 If you want, you can relax and watch a duel by climbing up on the walls. While up there, you are able to lean against the walls, and even throw a rotten tomato at the fighters below.

You can also fight in tournaments in the duel arena. Tournaments are held on only Worlds 54, 83, 114.

Map of the Tournament Area 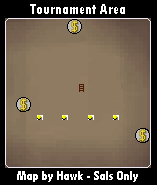 When you first climb down the stair leading to the tournament registration area, you will see a message pop up. 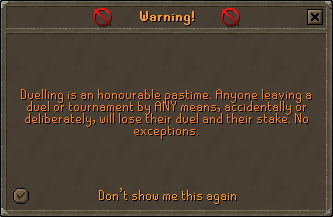 Downstairs, there is a bank, five registrars, a leader board, and spectators. Spectators usually give you good hints.

The leader board shows the past several winners and runner-ups of tournaments. 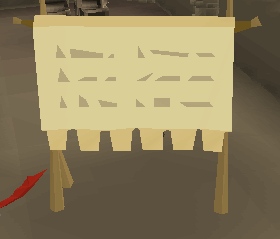 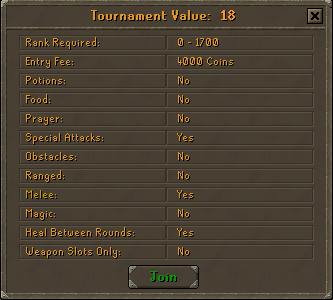 When the tournament starts, you will be taken to a waiting room. You will also be taken to this room once you have defeated your opponent. If you lose, you will appear in the hospital upstairs.

The tournament is fought just like a normal duel, the only difference is the time limit. 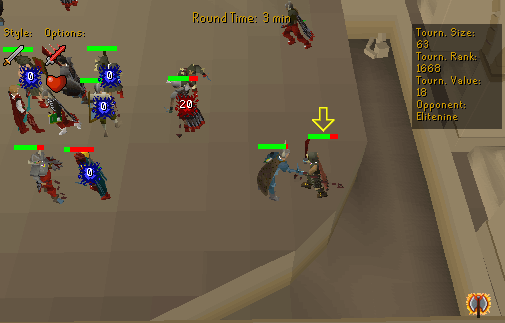 If you win the tournament, you will receive the following message and all of the cash from each person's stake.