Soul Wars is an Activity similar to Castle Wars, where it is located in Edgeville only on member worlds. However it's designated worlds are 44, 143 and 145. Just like other Activities, there are, of course, rewards you can win, ranging from experience for all of your combat skills (excluding Summoning) to having one of your slaughtered creatures from Slayer to become a familiar to gambling and winning up to 100,000gp! Although there aren't any skills requirements, having a high Slayer and combat levels are recommend. This is a safe game, so you will not lose your items upon death.

Because Soul Wars is a Safe Activity, feel free to bring the best items you can afford. The following are recommendations for equipment setups. 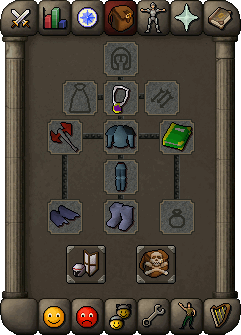 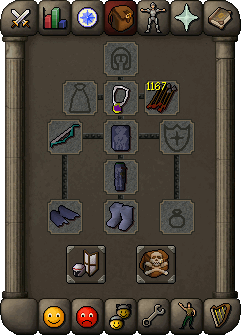 There are a number of ways to get to the Soul Wars arena: 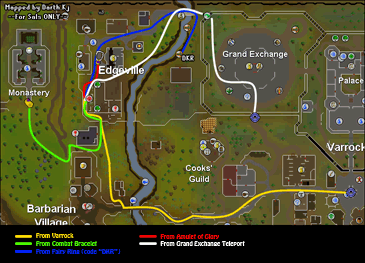 Enter the portal to be teleported to the Island of Soul Wars. Find Nomad and talk to him. He will give you two choices:

Choose whichever one you like. Once you have done the tutorial or read the book, head South past the graveyards. 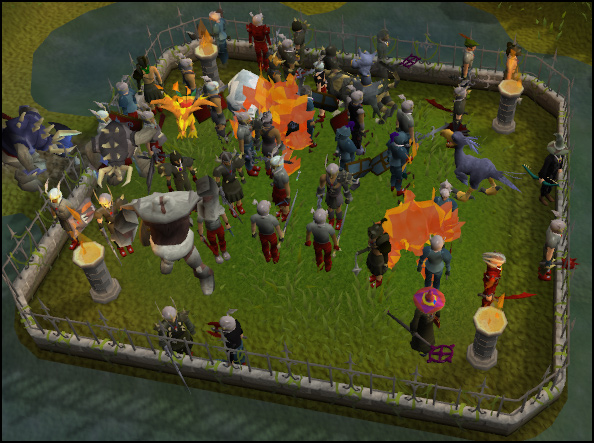 Let the Soul Wars begin! Here is a map of the battlefield: 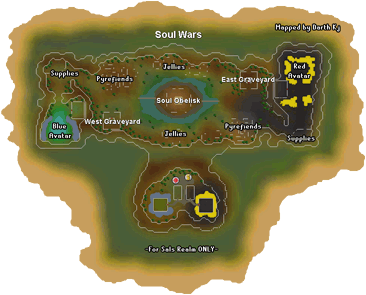 When you enter your team's graveyard, Nomad will yell at you:

If you have had enough of Soul Wars, feel free to leave via the portal behind you. To aid your allies in the battle, step through the forcefield.

You now have three choices:

Your main objective is to use the Soul Obelisk to lower your enemies' Avatar slayer level so you or your teammates can attack the avatar. You can lower it by using Soul Fragments you find when you kill Jellies, Pyrefiends or enemy players with the Soul Obelisk. 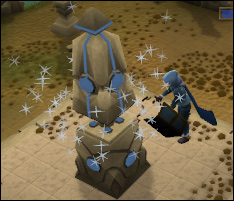 However, to do that, you need to make sure your team has more players standing around the obelisk then the enemy team does. Then you will start to take over the Soul Obelisk.

You can also kill Pyrefiends (Level 30 Slayer required) or Jellies (Level 52 Slayer required) to collect bones and bury them in one of your graveyards to help boost your avatars slayer level again.

While playing the game, there will be a bar in the top-right corner of your screen: 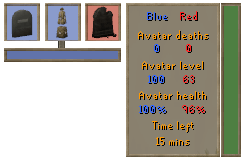 On the right is a Green Bar, if this gets down to Orange/Red, You will be kicked soon for not participating in the game. You can get this back up again by attacking enemies, using Soul Fragments on the Soul Obelisk etc.

On the East and west sides of the battlefield are supplies which you can use to your advantage. 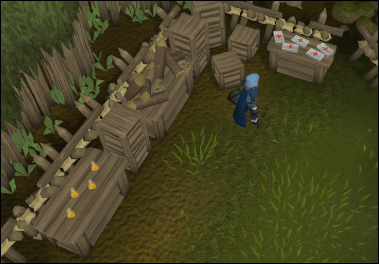 If you happen to die during the Activities, you will respawn in the nearest graveyard your team controls.

If you choose to leave a game, you can leave via the portal in the graveyard next to your avatar.

Warning: If you leave a game, you are unable to join another game until that game is over. This is to stop cheaters swapping over to the winning side.

If your team wins, Congratulations! You will get the following message:

The only way to win the game is by killing the enemy avatar as many times as you can. But it won't be easy, they're a whopping level 525! 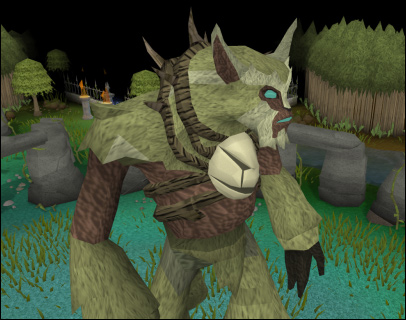 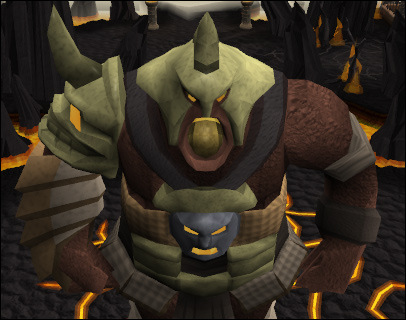 Now, you have to got to take the dangerous path of getting past the enemy. Toggle Run and run past your enemies ignoring them until you reach the enemies avatar. Along the way you may need to destroy a few barricades.

Once you reach the avatar, get ready for a fierce fight against it. It is highly recommended to have a familiar out so they can attack enemy players who are attacking you as familiars are unable to harm the enemy avatar.

Protect from Melee is extremely recommended. If you can, use Enchanted Ruby bolts as they can hit 150+! However, you can also use a Godsword against the avatar if you prefer melee. It is also recommended to be level 115+ as you will be defending yourself against a level 525 and other players.

It's dangerous, but you will reap the rewards if you kill the Avatar!

You can view the available rewards by talking to Nomad.

All rewards are purchased using Zeal, which you receive whenever you participate in a Soul Wars game.

You can spend the Zeal you earn on experience, Summoning charms, Slayer pets, or you can gamble. You can gain experience in the following skills:

The amount of experience earned per Zeal Point depends on your level in the selected skill.

If you have slaughtered a certain Slayer monster in the past (a Zombie Hand for example), you are able to take it to Nomad, and get it turned into a Summoning pet as long as you have the required amount of Zeal.

In the "Other" tab, you have the choice to gamble using the "?" icon. If you gamble, you can receive one of the following:

You also unlock the following Music tracks while playing/waiting: