By: Renedagerp
Special Thanks to: Army of One, Micael Fatia

"The Kiln is where TzHaar were first made. Its sacred lava is able to give life, melt the hardest of metals and even restore the memories of our lost ancestors."
~TzHaar-Mej-Jeh

The Fight Kiln is a mini-game unlocked upon sacrificing a Fire Cape after the completion of the Master Quest, the Elder Kiln. It is the harder version of the Fight Caves, and as such, requires some strategy before attempting to endure all 37 waves of creatures.

The Kiln, located east of the TzHaar main plaza, is home to among the highest hitting creatures in all of RuneScape, so take caution before entering. One lucky hit from a TokHaar-Jad can undo hours of hard work and planning.

That being said, at higher levels, with the Obsidian gear, Soul Split and a Steel Titan, players can AFK most of the Kiln. For most players, the Kiln doesn't take over 40 minutes. (Expect an average time of 1 minute per wave)

There are a few things you should note before attempting the Fight Kiln.

Constitution crystals are very handy during Wave 28, and Waves 34 onwards.
Invulerability Crystals are handy during Wave 35, when Jad spawns in such a way that he will be able to attack you NO MATTER WHERE YOU STAND.
Restoration Crystals can save a few food and restores for the player.
While the other crystals do increase your levels tremendously (At level 99, your magic level after using a crystal becomes 148), they seem to lower your accuracy, and are not worth using, considering they drain your defence considerably.

As the Combat Triangle is in effect in the Kiln, it's highly recommended that you tribrid. Thus, the best gear to use would be the Hybrid- or All- tier.

"Let's get this thing started!"

The first few waves feature a lot of rangers in the form of TokHaar-Xil and TokHaar-Tok-Xil. Use your Drygores on them, and allow your combat familiar to deal with the other monsters. Most people can finish these first few waves without using any food or prayer.

Incase you are a low levelled player, or wish to adopt a more welfare approach, for Waves 1-9, you should stand near the L shaped rock in the South of the caves: 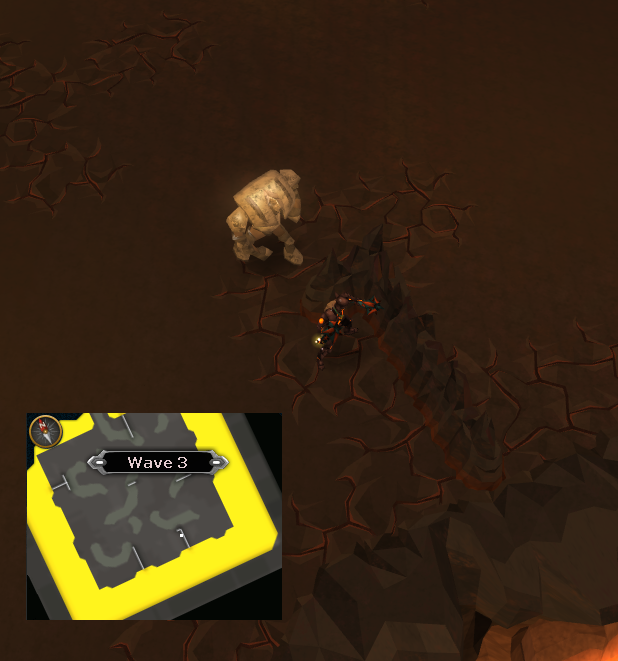 This traps most of the monsters that spawn. While you stand here, only one monster will be able to attack you at a time. In the picture shown below, it's the monster with a yellow circle beneath him: 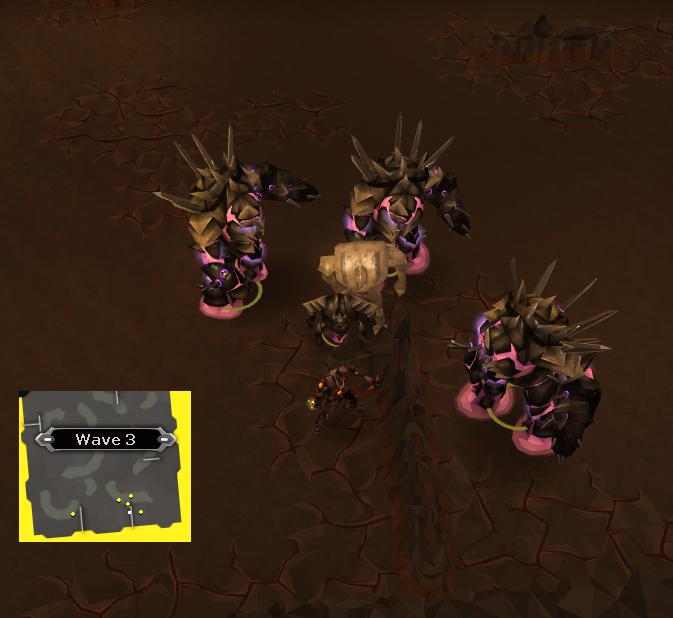 The Invulnerability Crystal will spawn after you complete Wave 1. You'll only really find a use for it on Wave 35, with the Jad who can't be trapped. Pick it up if you feel like it, as a Constitution crystal should suffice for the Wave, and it would save you an inventory space.
The Restoration Crystal will spawn on Wave 3. Always take these, as they can truly save your life, and save you quite a few supplies.

On Wave 10, your first Jad spawns. Don't panic. The version you'll be fighting is much easier than the one you've already fought in the Fight Caves. TokHaar-Jad doesn't spawn healers, and he only has around 8,000 life points.

Whenever Jad spawns, you want to run to the North Eastern side of the Central Rock. You will be facing 7 Jads throughout the entirety of the Fight Kiln; standing here traps 6 of them. 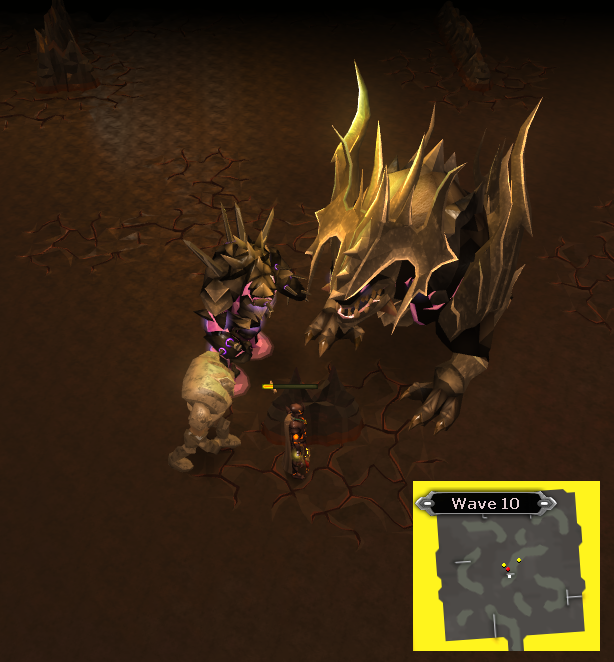 Once Jad falls into place, ensure your prayer points are high enough, and kill him preferably with either Ranged or Magic. This way, prayer switching is less intensive. A few threshold abilities are usually enough to kill him.

A cutscene will play upon finishing this wave. 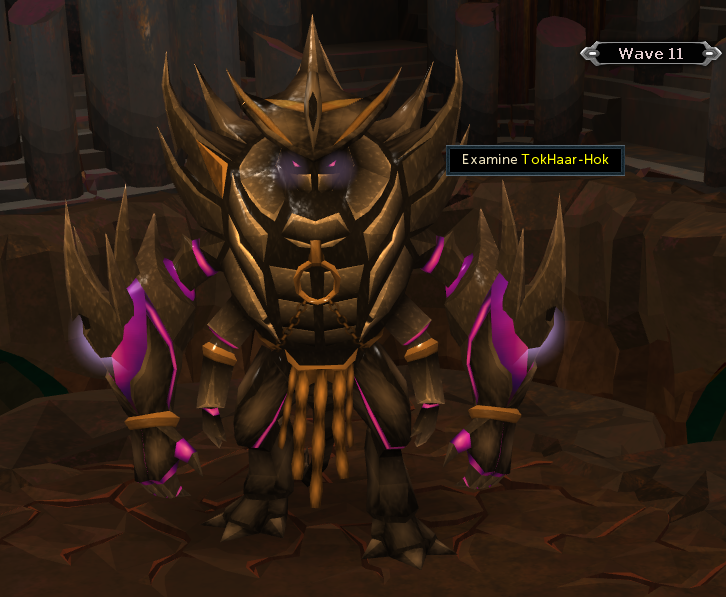 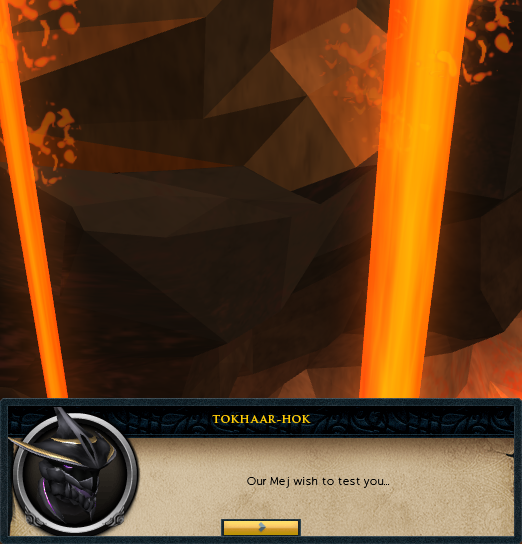 After this cutscene, lava will have filled the cave a bit, making the area smaller.

These next few waves feature many TokHaar-Ket-Mej and TokHaar-Ket-Zek. Equip your ranged weapon, and begin the slaughterfest. Steel Titans are extremely helpful for these waves, as their special attack, Steel of Legends, is very accurate on all the Magic-based TokHaar.

On Wave 19, a Tok-Haar-Ket-Dil spawns- the first of many. This creature is capable of dealing unblock able damage to you, by using its "Stomp" attack. The best way to take minimum damage against these is to set your Combat Familiar on them, and use dreadnips if you brought them.

It's important to note that Dills cannot be harmed by conventional weaponry until its heavy shell is broken by a pickaxe (the one in your Toolbelt works now, after a Patch update.) However, Combat familiars and Dreadnips are able to bypass the Dill's protective shell, and if used correctly, save you quite some time when fighting these giant armadillos.

After finishing this wave, run to your safest (the North-Eastern corner of the Central rock), and prepare yourself:

Another Jad spawns, but if you're in the correct position, he will be trapped behind the Central rock. Deal with him like you did last time. 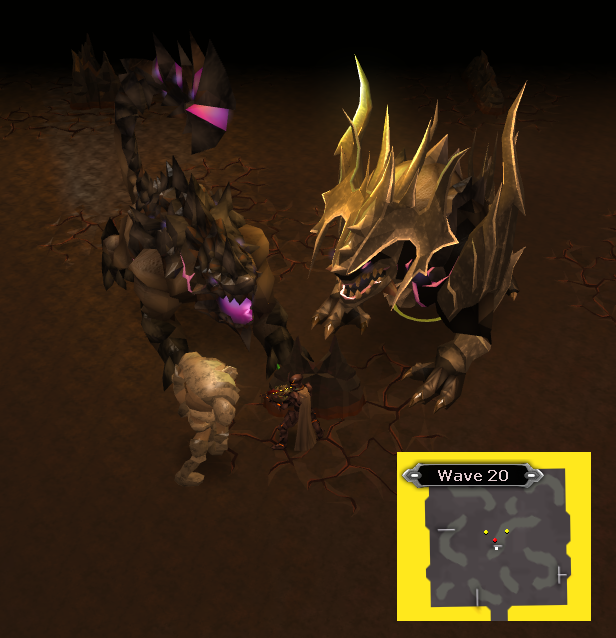 After you finish this wave, a cutscene will play, and more lava will fill the cave. 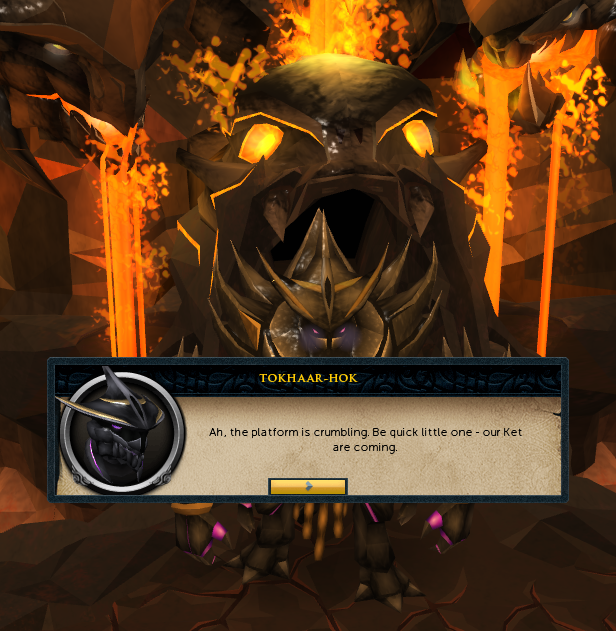 These next few waves are filled with Meleers. Use Magic to ensure your DPS is highest here. While nothing in these waves can deal a lot of damage to you, if you decided to adopt a more welfare plan, stand here, along the Eastern safest: 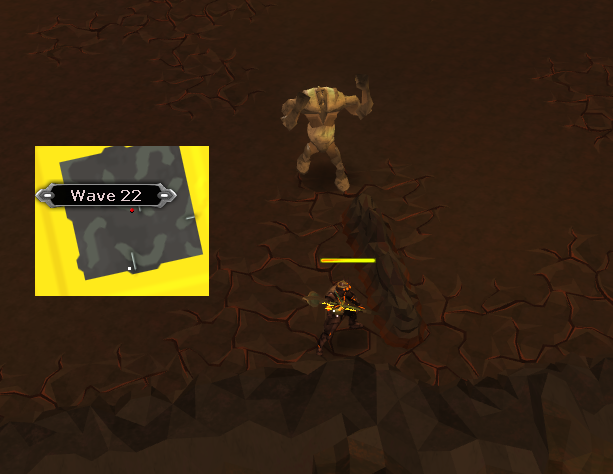 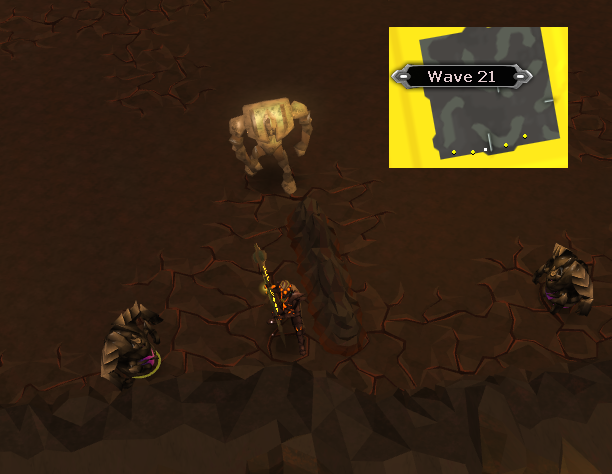 This is among the most important waves of the Kiln, and often makes the difference between success and failure. Most guides will tell you to run to the centre and attempt to trap all the Dills like you did Jad. DON'T DO THIS. Drawing the attention of every Dill in the room is not a good survival plan.

Note, while the Invulnerability crystal cannot shield you from the Stomp attacks of the Dills, the Constitution crystal dramatically boosts your life points, and it's highly recommended to use it on this wave (incase something goes wrong and you find yourself the target of several Dills.)

So instead of standing at the Central rock when the wave starts, make sure you're standing in the North-Eastern corner of the Cave, as shown below: 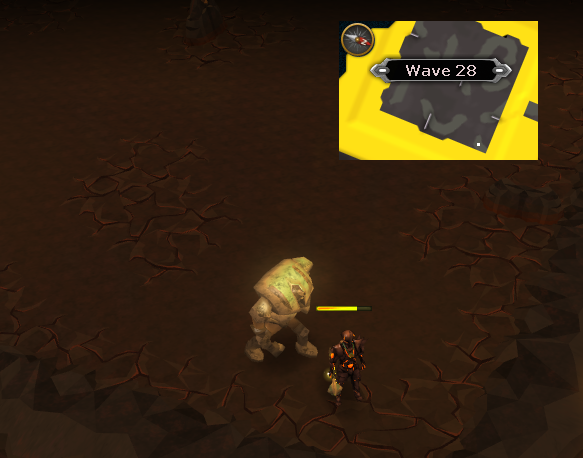 A TokHaar-Ket-Dil will spawn directly on top of you, and will be the only thing attacking you. Take it out. Next, to your West should be a TokHaar Ket-Zek. Kill it yourself or have your familiar take it out; he's the least of your worries.

Proceed in a counter-clockwise fashion; this ensures that you are never in combat with more than 1 Dill at a time, and dramatically increases your chances of survival.

This wave shouldn't be too hard. 6 TokHaar-Mej-Kot will spawn, and you can easily take them all out with Magic. After this wave is done, return to your safespot in the centre of the cave, and prepare yourself. 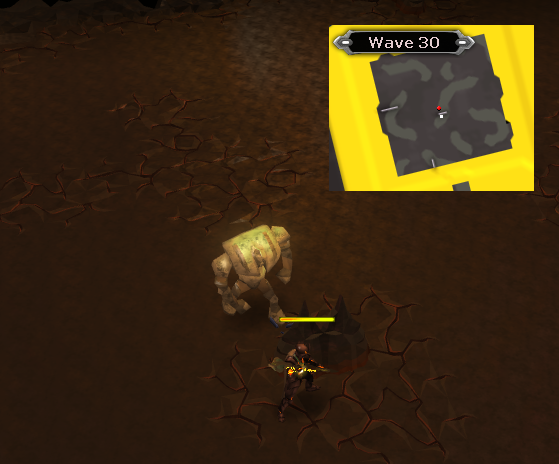 If you stood in the right spot, this should happen: 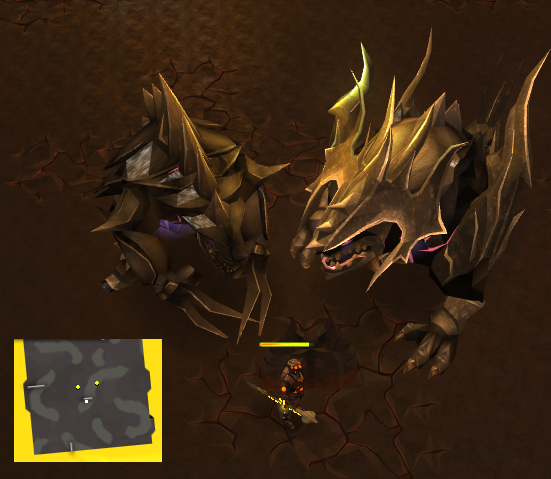 Good job on making it thus far. You have succeeded where thousands have failed. But now, the true challenge begins.

Before Wave 31 starts, a cutscene will play: 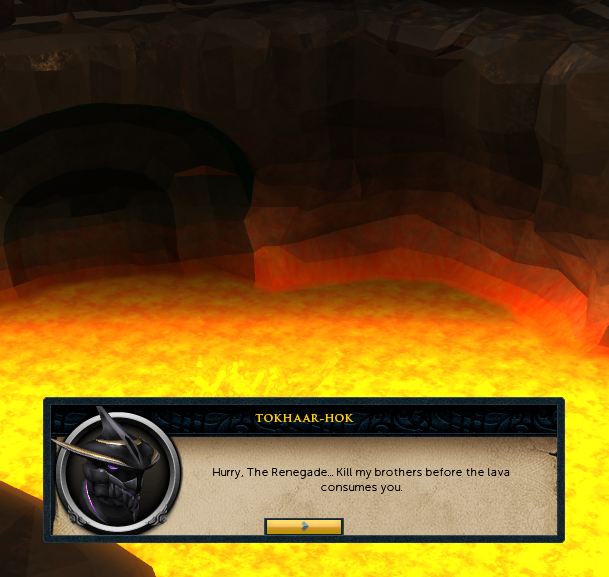 This wave features mostly Rangers, and thus you should use your melee weapons to maximum effect here.

This wave will have several meleers. Introduce them to your spell casting abilities. 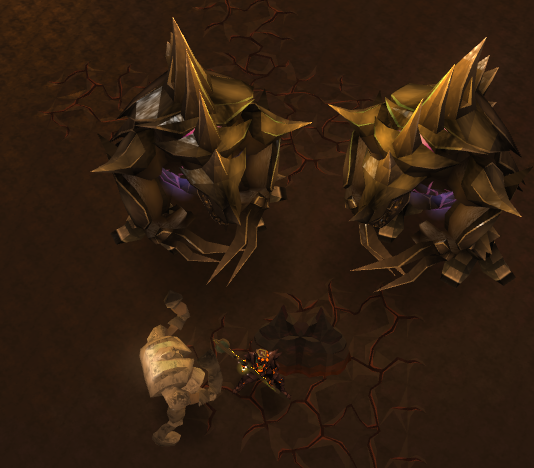 This wave is full of Magers. Teach them to fear your crossbow (and your Steel Titan). 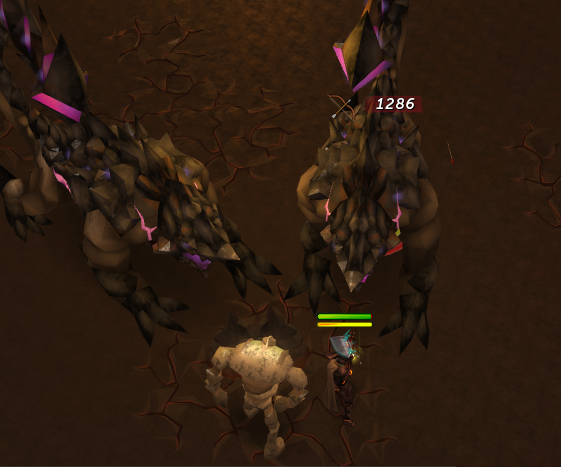 Every wave from 34 onwards has a TokHaar-Jad. Thus, it is imperative you do not lose your calm. Activate a constitution crystal if you want, incase Jad gets a hit in.

After the cutscene, you will spawn on the WRONG SIDE of the central rock. 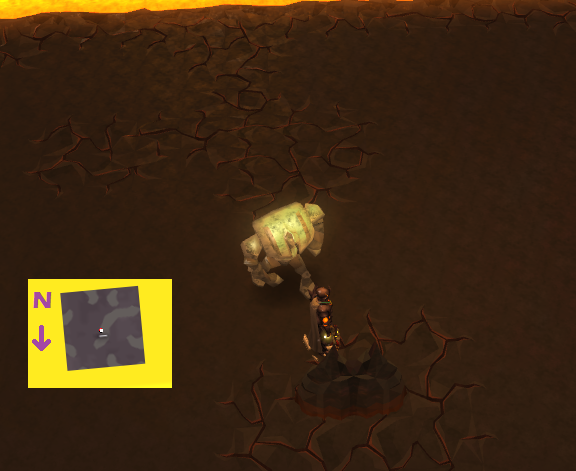 It's important that you run to the other side, or else Jad can get a lucky hit on you. 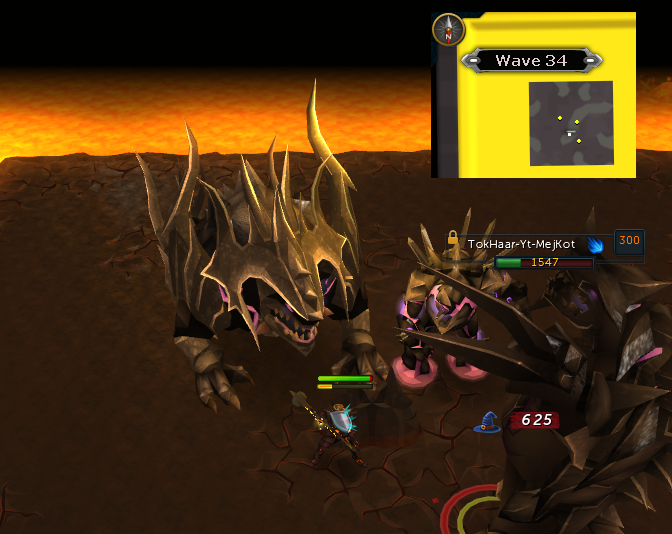 Upon completing this Wave, 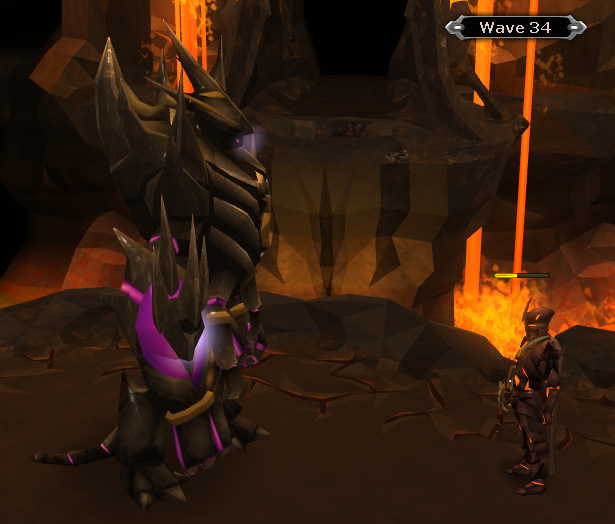 Wave 35: Jad #5: The One Who Learnt From His Fallen Brethren

This particular Jad spawns in the North East corner, and CANNOT BE TRAPPED behind the rock like the others. So for this wave, stand in this corner: 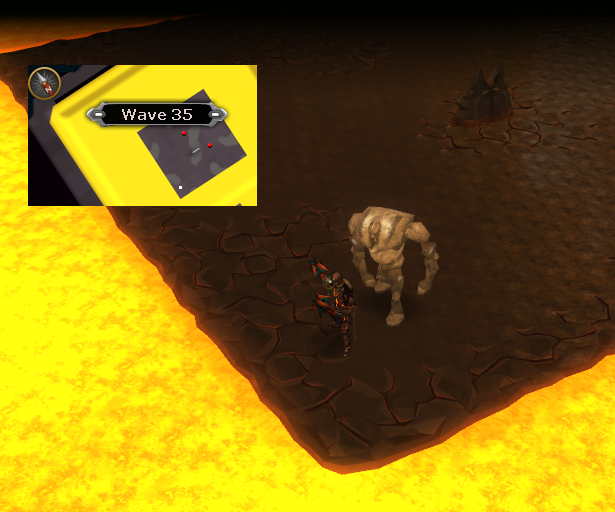 When Jad spawns, take an invulnerability crystal, activate Turmoil and quickly kill Jad. You have 15 seconds to do around 7,500 damage before you need to start switching prayers. 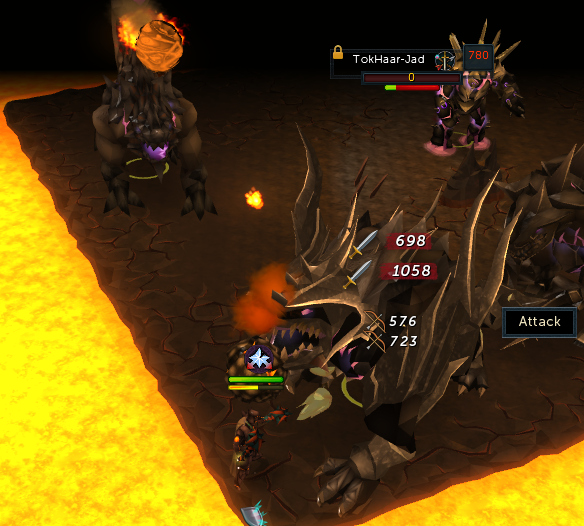 In the penultimate wave of the Fight Kiln, you have to face not one, but TWO TokHaar-Jads (at the same time)! Luckily for you, both Jads get trapped if you use your safespot again, as shown below: 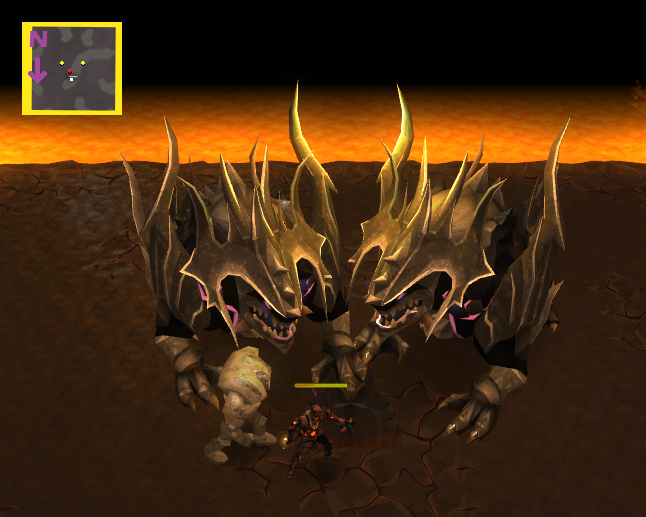 Unfortunately for them, they both meet the same fate: 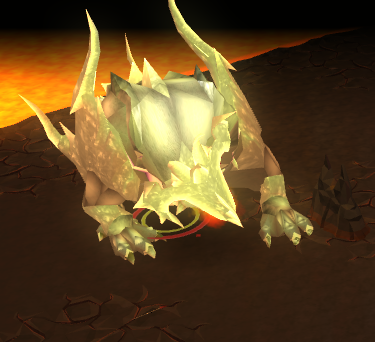 Now who said two heads were better than one?

Congratulations! You're all done! 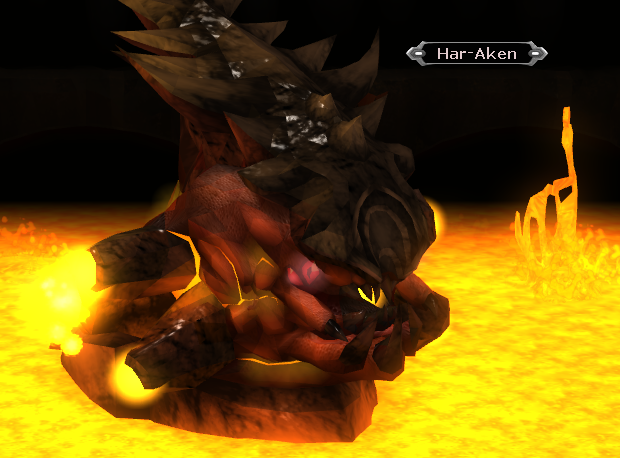 Har-Aken is not very hard. Activate your third and final Constitution crystal during this wave, and you won't die (while it is active, at the very least.)
Harken only shows himself every so often for 72 seconds. For the rest of the fight, he will be submerged beneath the lava.
Build your adrenaline on the tentacles around the Cave, and when you get 100, either activate Sunshine or Death's Swiftness, and begin killing him. The real challenge with Har-Aken is that your max hit is reduced significantly. Thus it's not advised to use the Magic crystals on this wave, because surprisingly they decrease your accuracy. Use the Constitution crystal instead! You'll be kept alive for the entirety of the boss fight. 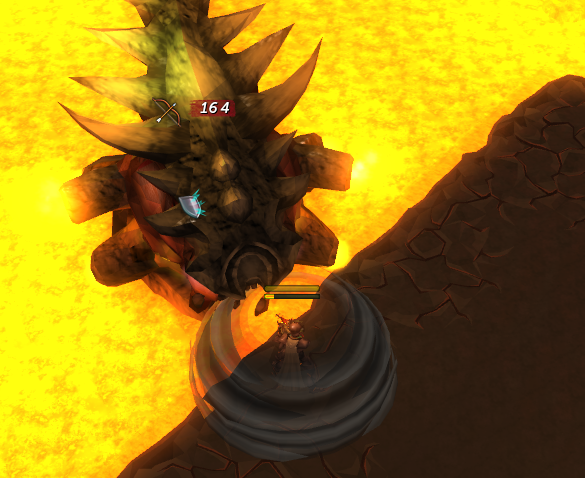 Note: Ingesting/Applying Weapon Poison ++ before attacking Har-Aken causes him to get poisoned, and he will keep getting damaged even when he's not visible.

Congratulations! (For real this time) 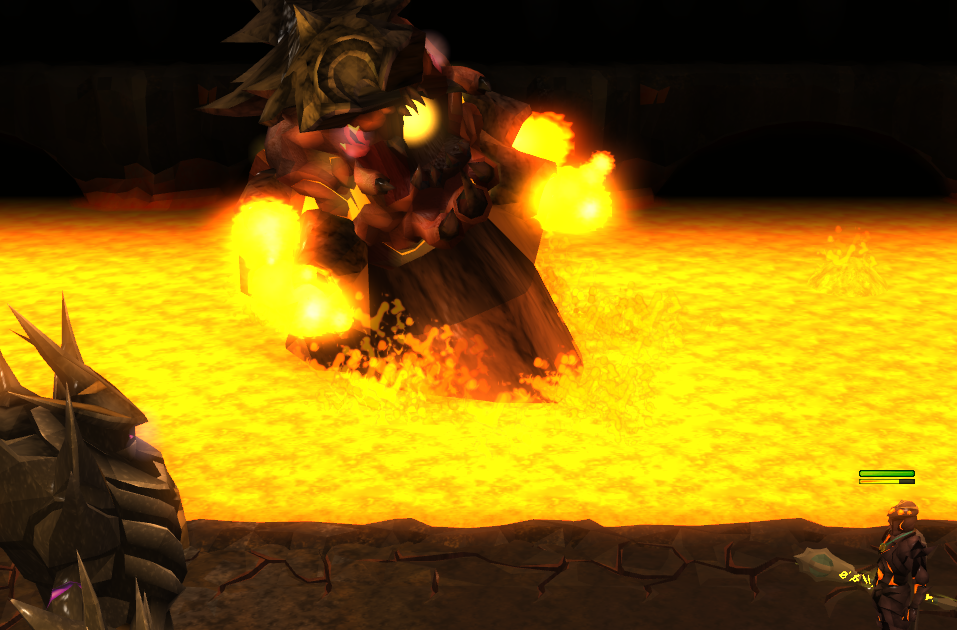 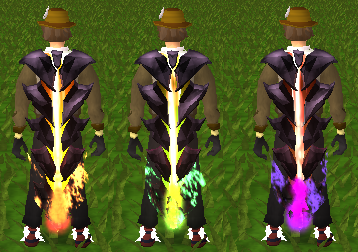 You can chose between a TokHaar-Kal cape and an uncut onyx. Unlike the old days, you cannot choose which cape you want, but you are offered the choice between an uncut onyx and the capes representing the attack styles you used to deal the most damage with. These are some of the best capes in the game.

At any point during the Fight Kiln, should you wish to log out, you can do so. Simply click the log out button like you normally would. If done between waves, you will be logged out. If you forcibly close your browser window, you will either have died in the Kiln, or will have to repeat the wave you just completed.

In conclusion, the Fight Kiln was a game-changing mini-game. Prior to its release, some players would desperately try to accumulate 2.7M tokkul so they could purchase an uncut onyx from the store in TzHaar city. The Fight Kiln remains among the best consistent, guaranteed money making methods in the entire game.

"Jal-Yt, Within this Kiln flows sacred lava. Through it, we remain constant. If we are destroyed within this place, the lava rises and the Kiln forges us once more. Through this we are one... our memories shared by the lava. Existence as individuals is only ever... fleeting."
~TokHaar-Hok