Penguin Hide-And-Seek is one of a number of Distractions and Diversions in RuneScape. Larry, the Ardougne Zoo Keeper, is convinced that the KGP, an organization of penguins, are plotting world domination. Your job is to locate and spy on these evil penguins, and report back with any information you've gathered.

There are no requirements for playing this Distraction and Diversion, however there are two quests which will increase the total numberof points you can earn each week:

Other quests such as Priest in Peril, Lost City, and Underground Pass will be useful in catching certain penguins.

Here are some items that may useful. But it's also useful to keep weight low because the more weight you have the faster your energy will drain.

To start, talk to Larry the Zookeeper in Ardougne Zoo. Larry is located south of the Ardougne Zoo. After you have completed The Hunt for Red Raktuber, you must speak to Chuck the Polar Bear, located on the Iceburg in the Zoo. 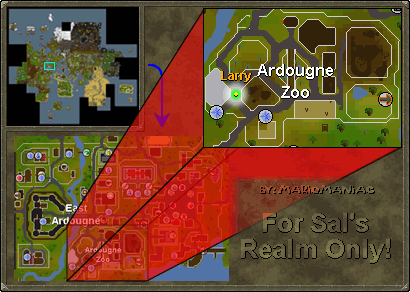 Larry is convinced that the Penguins are attempting to take over the world of RuneScape. Larry will give you a Spy notebook. The notebook is used to keep track of how many Penguin Points you have and how many you have got that week. 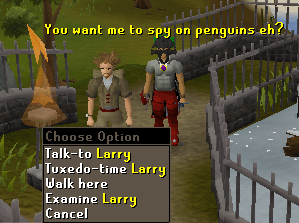 Penguins are hard to find. They hide in objects and are not shown on the map. They hide in barrels, bushes, cacti, crates, rocks and toadstools. They hide in various different cities but they move around quite a bit and move to different places each week. World 60 is currently the unofficial world for finding penguins.

It's best just to go about your day normally finding them as you go along, but some choose to go out to find them. There are Clan Chats that search for them. But if you do want to look for them they are normally found in:

Playing with sounds turned on and up can make it easier to find as they make a squeak. The sound is a source from "Background Noise" section of audio on the Audio.

There are exactly 10 penguins out at a time. You can acquire up to 15 Penguin Points per week if you have completed the Cold War quest; otherwise you can only acquire up to 10 points. They always have a disguise that matches with their surroundings. They also cover a lot of ground. Quests like Priest in Peril, Lost City and Underground Pass would be useful with catching them.

There are a number of Clan Chats and Clans which will assist players in locating Penguins for the current week. Team Penguin is a group of players dedicated to helping other players find Penguins, and they are currently one of the most popular "Penguin Hunting" groups in RuneScape. Their main Clan Chat room is World60Pengs. They also operate three other Clan Chats, which are used in the following order when the main chat is full:

Note: Sal's Realm of RuneScape is not affiliated with Team Penguin or any related Clan Chats.

Before joining the chat, please take note of a few guidelines:

Go back to Larry (or Chuck the Polar Bear, if you have completed The Hunt for Red Raktuber) in the Ardougne Zoo to claim your reward. The points can be sold for 6,500 coins per point or for experience points. The experience points depends on the level of the skill. When you cash them in, you'll cash them all in at once. There's no splitting them. Larry and Chuck will only hold 50 points at a time.