Shattered Heart, one of RuneScape's 'Distraction & Diversions', is a members-only feature that allows players to trade 'Strange Rocks' for experience in the relevant skill. Whilst training your non-combat skills, you may notice that a 'Strange Rock' has suddenly appeared in your inventory. These rocks are remnant from the Second Age, surviving artefacts from times of turmoil and war between the Gods. Can you find all the pieces of the Shattered Heart, and rebuild the forgotten statue of the mage Dahmaroc?

To start Shattered Heart, you must train any non-combat skill (excluding Dungeoneering) until you receive a 'Strange Rock'. You can either take this rock to the Varrock Museum for experience in the relevant skill, or you can continue training and collecting rocks. There are two rocks available for each skill, and you will not be able to obtain any more rocks if you already have two for that skill. If you wish, you can add the two rocks in a skill at the same time. 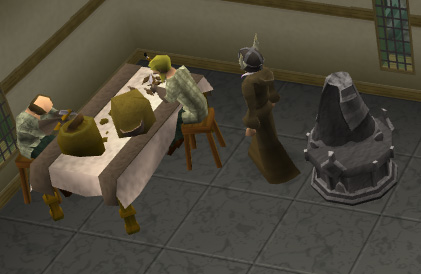 Note: The final two rocks can only be added once per week.

To obtain Strange Rocks, you must perform a specific action in the skill that you are training. These actions are:

To rebuild the statue, take the Strange Rocks to the Research Team near the plinth in Varrock Museum. Just tell them about the rocks that you have found, and they will give you experience in return for the rocks that you have found, and eventually you will see the statue starting to take place. The first time you complete the statue, you will be given Museum Kudos as well as the experience reward.

The only reward for completing Shattered Heart after the first time is experience, but the entire diversion may be complete multiple times, for more experience. You are awarded experience based on your current level in the skill that you obtained the Strange Rock in. You are also awarded experience per rock, so if you have collected two rocks from one skill, you will be able to collect the reward twice.

After completing the statue for the first time, players will receive a statue plinth that can be used to build a replica statue in the study of their player owned house. Each subsequent time the player completes Shattered Heart he or she will earn another replica piece to add to the statue. It takes 30 replica pieces to complete the statue.