The Shooting Stars Activity is part of a set of Activities known as Distractions and Diversions. Unlike normal Activities, you need to follow these games around RuneScape. Every so often, a shooting star will fall somewhere in RuneScape. Mining from this fallen star will allow you to meet a Star Sprite who will reward you for mining it.

The minimum skill requirement in order to play this game is level 10 Mining. A higher mining level helps, along with a House with portals and a telescope.

There are different sizes of stars. Depending on the size of the star that you find, you will need to have a certain level.

You will need to have a pickaxe in order to mine the star. The better the pickaxe, the more stardust you will receive from the star. Teleport runes are recommended, in order to get around to the landing places quickly. Wearing a charged Amulet of Glory while mining the star increases the chances to receive a gem up to diamonds.

This is the recommended gear for most stars: 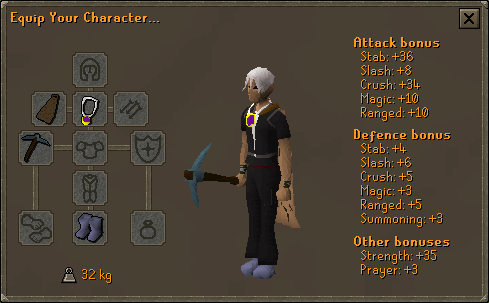 The shooting star can land in a variety of places. The faster you get to the location, the more stardust you can mine. If you arrive first, you also get a bonus of 75 experience per mining level that you have. You will also get your name put on a noticeboard in the Observatory. 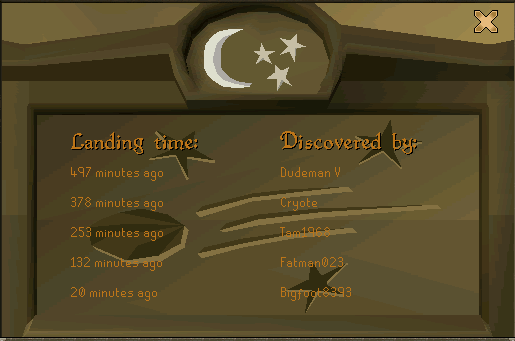 Stars always land near a bank or near a mine. The locations are as follows:

"To play this Activity, you have to find a shooting star that has collided with RuneScape To get a hint on where the shooting star will land, you can look through a telescope in a Player-Owned House. It will give you an estimation on where and when the star will land. The better type of telescope it is, the more accurate information you will receive." 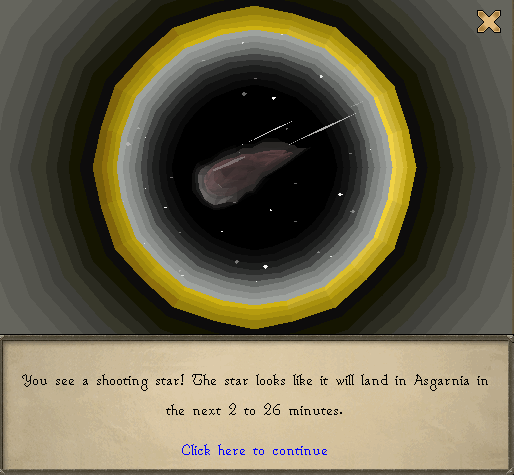 If you do not see a star in your telescope, that means a star is currently on the ground in your world.

When you arrive at the star, you will be able to mine and prospect it. To find out what size it is, you will need to prospect it. You can also find out how far the star's current layer is mined through when you prospect it. When you can mine it, start. Whenever the size decreases, you will want to start mining again. This is identified by a cloud of dust and a collapsing sound.

You will receive experience based on what size the star is when you mine it.

While mining, you have a chance to find gems in the star. If you have mined long enough, you will eventually reach the max number of stardust, which is 200. Once you have reached this limit, you can keep mining, only to earn experience. Once a star has been mined through completely, a sprite will appear. You can talk to the sprite once a day to receive the rewards. After receiving the rewards, you will be able to mine 200 more stardust, but you will not be able to spend it until 24 hours have passed.