There are no requirements to participate in this activity, however 57 Woodcutting and/or the completion of Summer's End may help you get to the Warbands camps quicker.

To begin this activity, speak with Quercus just northwest of the Grand Exchange. Quercus will tell you a little about the activity. If you don't want to listen to this spiel, the general goal of this activity is to hunt down bands of god followers in the wilderness. After doing so, you may loot their camps for supplies of certain skills (Herblore, Farming, Smithing, Mining, and Construction) and return them for Quercus for either gold or experience. Quercus will be able to tell you when the next warbands activity will occur. If you are far away from Quercus, you may use the "minigames" tab of your controls to find out when the next warbands will appear.

As this activity may involve combat, bringing some sort of combat gear is advised. It is also suggested you leave open inventory space so you can have space for looted supplies. The maximum amount of supplies you can loot from a single camp is 25, so do not leave less than 25 inventory spaces open.

There are three locations where the warbands can spawn. 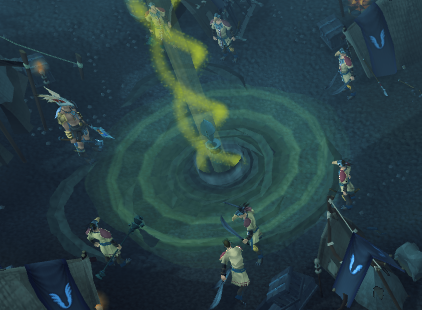 The camps will be inhabited by the followers of one of four gods (Saradomin, Zamorak, Armadyl, or Bandos). Upon arrival to an untouched camp, you should see the followers in the camp, which has a beam of light in the center.

The first thing you should do is to interrupt the beam. This can be done by clicking on the interrupt magic option. Following this, you can summon enemy fighters using the summon reinforcements option. These reinforcements will eliminate the fighters so you can loot the camp. When doing both of these, make sure you hide behind the tents to prevent being seen. If you are spotted, immediately get out of sight by hiding behind one of the tents. If you are spotted three times, the beam will "break" and you will have four minutes to clear and loot the camp before the camp is destroyed. If you successfully interrupt a beam and summon in reinforcements, you will have 10 minutes to loot the camp.

>There are six soldiers and a general (or boss) in each camp. The soldiers in the camp are as follows:

Once you have cleared the camp of any soldiers, you will have the ability to loot the camps. You cannot loot from Warband camps while you are under attack or while you are in a combat stance, including if you enter the combat stance via a defensive or auxiliary ability such as Anticipate or Surge. Also, once you start looting you will automatically be placed into multi-way combat. There are a total of five tents per camp (each containing supplies of a different skill), however only three tents can be looted per camp. The placement of each skill tent is the same for every camp. 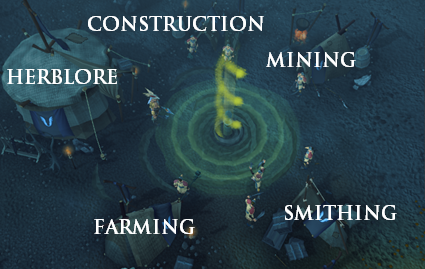 You can only hand in a maximum of 75 supplies per day. As you can only loot 3 camps per day, if you are unable to get the full 75 supplies from 3 different camps you can kill other players and pick up their supplies, however the limit remains 75. Destroying supplies or dying with them will NOT restore your daily limit. There are also several other limits. You can interrupt the beam, summon in reinforcements, and kill the general an unlimited amount of times per day, however you can only get experience three times. The experience gained for interrupting the beam and summoning reinforcements is 2*(X^2-2X+100), while experience gained for killing the general is X^2-2X+100 (where X is your level in said skill).

Lucky or unlucky (depending on how many player killers are around!) players may receive the Wand of Treachery from looting a camp. The Wand of Treachery is a level 70 one handed magic weapon. If a player receives a wand, a message in the chatbox of all players in the vicinity will alert them of who has the wand. The players' prayer points will also be reduced to 0 and they will be surrounded by a blue aura, making it easier for other players to see who has the wand.

As your prayer points fall to 0 once you have looted the wand, it is a good idea to drink from a prayer restore potion and put on a protect item and attack prayer so you can hopefully make it out alive and if not at least keep your most expensive item.

If you want to loot three warbands camps per wave, you're going to have to know a few more things first. For starters, decent but affordable gear will be needed. Here is a fairly standard warbands gear set-up. 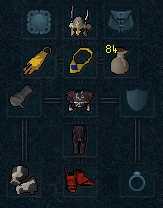 You should have at least a tier 70 weapon (preferably 75+) if you expect to do this well. Royal dragonhide and ganodermic armor are the most popular armors to wear, as they are fairly good yet affordable. Cheap boots mid-tier boots(such as the dragon boots) can help as well. Neitiznot helmets and Dragon helmets are currently popular helmet slot items. If you have completed Summer's End, a games necklace is useful for teleporting to the corporeal beast, conveniently located in proximity to two of the areas. Team capes are often required by warbands friend chats, which will be touched upon at a later section.

A few other items can be useful in PvP scenarios. Food (Shark and above is suggested), Portents of Restoration, and Phoenix Necklaces can help you heal. As you can only bring three of these healing items in your inventory if you wish to loot the full 25 supplies you can loot from a camp, bringing a beast of burden familiar full with such supplies can also help greatly.

Finally, there is the point of Warbands Friend Chats, or FCs. Warbands FCs basically act as a clan as a wave, killing the minions and other players in an organized manner. If you wish to warband at an efficient level, it is suggested to find an FC as soloing warbands can be limiting. It may be wise to ask a few of your friends if they know of any FCs you can warband with (or you could just warband with your friends/clan). Each FC usually limits their size to 40 players, so try to join the FC early as things are usually done first come, first serve. FCs will also ask you to leave your clan chat and put your private chat off to avoid getting crashed. Some FCs also have different gear or other general requirements. Make sure you know these before heading out with your FC, or it could spell your death! Finding a good FC can be difficult, but in the end it will be well worth it. Often, the warband FCs will partake in a large war at the end of a wave, which is currently the largest PvP event in Runescape 3.