Welcome to the Fremennik Slayer Dungeon, a dark and creepy cavern filled with quite a few deadly Slayer monsters. The dungeon can be found to the east of Rellekka, and to the northeast of Seers' Village. If you're planning on slaying some foul monsters, dust off your Mirror Shield and bring along a bag or two of Salt; there's no telling what might jump out at you!

The easiest way is to walk in the direction of Rellekka after using Camelot Teleport. Once across the bridge, turn east and eventually you will see the Golden Apple Tree. The entrance is a bit further east of it. Follow the red route in the picture: 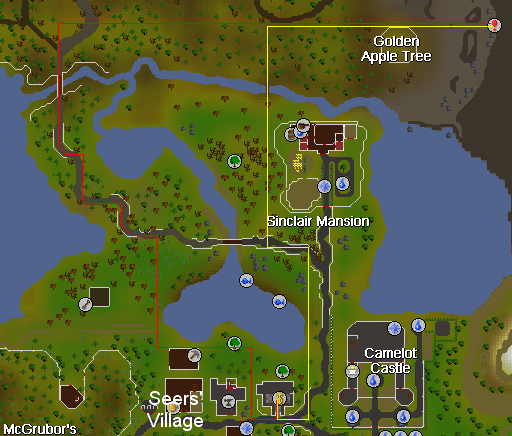 Another possibility is to take the Agility shortcut: A log balance located a bit north of the Sinclair Mansion. 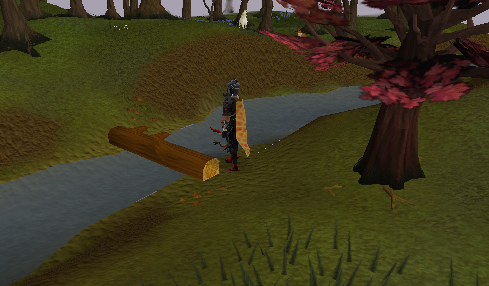 For this, you'll need level 48 Agility. Follow the yellow line if you're going to use this route.

If you did everything as it should be done, you'll see the entrance to the dungeon: 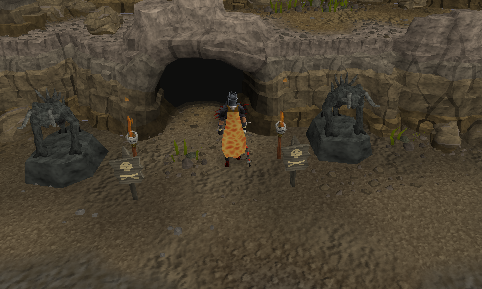 Also, if you have at least started Fairy Tale Part 2: Cure a Queen, you can use the Fairy Ring combination AJR to teleport right outside of the dungeon. 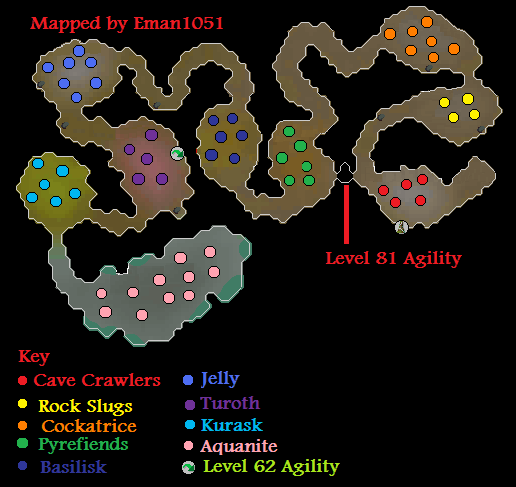 As you can see the dungeon has different rooms: Each of those is populated by one particular type of Slayer Monster. As you go deeper into the dungeon, the monsters get harder and require a higher Slayer level to kill.

Once you walk in, you may notice that there is something peculiar about this dungeon: you walk in going east, but once you're inside you'll be traveling west.

You should remember two things in particular:

In the first room you will find several level 76 Cave Crawlers, and you will need level 10 Slayer to kill them. Beware though: They can poison you, so bring anti-poison potions if you need to fight these for slayer. These creatures are also aggressive to low levels. 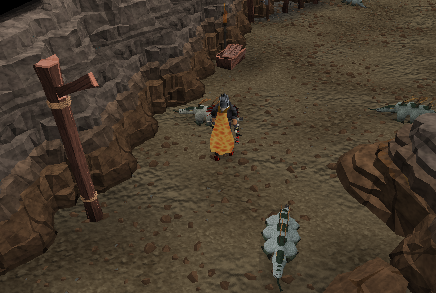 Walk on and you will find an Agility shortcut: A high level one, 81 needed to cross it into the 4th chamber where Pyrefiends have their home.

Next is the chamber filled with Rock Slugs. This is the first monster that needs a particular Slayer item to kill: a Bag of Salt you can buy at any Slayer Master. Start fighting it and when it is down to its last Life Point use the bag of salt on it: It is the only way to kill it, cost at a slayer master, 10gp each but rising as you buy. 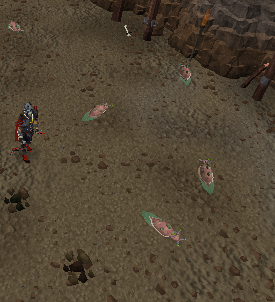 The third chamber next and one filled with bird-like Cockatrice, level 64 with 1,600 Life Points. Again a monster that needs a certain piece of equipment: A mirror shield. The cost at any slayer master is 5,000gp. 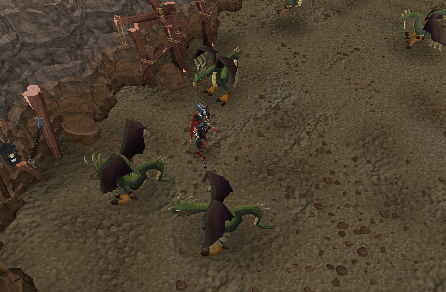 The fourth chamber, also known as a rangers' delight, contains Pyrefiends. They are level 88, have 4,400 Life Points, and require level 30 Slayer. 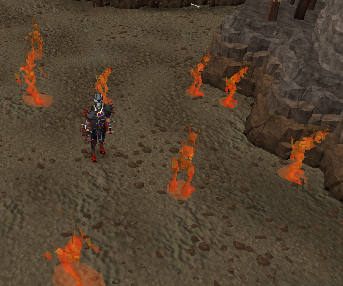 The next room is number 5 and home to the Basilisk. They are level 110, require a Slayer level of 40, and have 2750 Life Points.You need a Mirror Shield to take these monsters on. 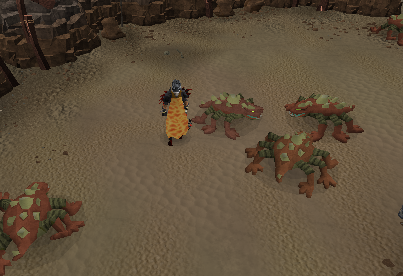 This room also has a shortcut on the west side and brings you directly to the Turoths. Agility level needed: 62. 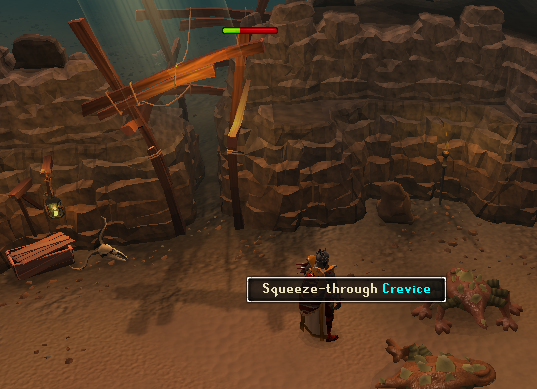 Next in line are Jellys in room number 6. They are level 98, require 52 Slayer, and have 2,450 Life Points. When fighting it melee-style the same as with Pyrefiends: use Dragonhide armour. 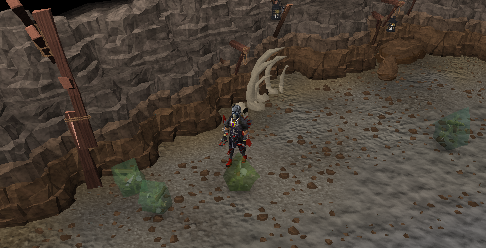 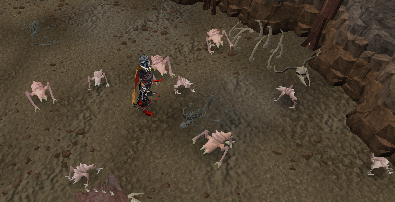 The eighth chamber houses one of the two aggressive monsters: level 112 Kurasks. You'll need 70 Slayer to kill them, and they have 2,800 Life Points. As with Turoths, use Leaf-Bladed Spears for melee, Slayer Staff needed to cast Magic Dart for mages, and Broad Arrows for the ranger. There are 3 good range and mage spots. Be careful though: they can hit pretty hard - up to 224 Life Points - and there is the problem of not much melee Defence for mages and rangers and their armor. 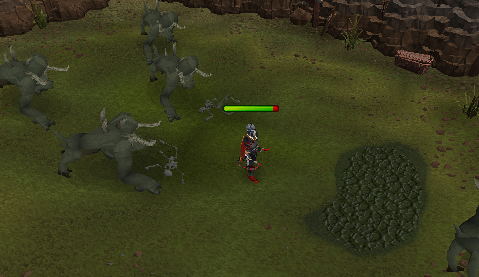 In this last chamber you will encounter the Aquanite. They are level 136 and have 3,400 Life Points. To kill them you must have at least level 78 Slayer. They attack using magic attacks. It is best to wear Dragonhide Armour. They will hit through your protection prayers for up to 250 damage. 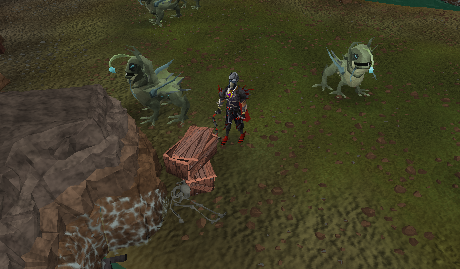