By: TakerMayFire
Special Thanks to: Dragonclaw, Son of Zamorak
Original Guide by: Neo Avatars

The Kalphite Hive is used mainly for training Slayer or killing the Kalphite Queen. This dungeon is also one of the few locations in Runescape that you can obtain a Potato Cactus (a secondary ingredient used in Herblore to make a Magic Potion). It is located in the desert South of Al Kharid directly West of the Shantay Pass. You need a rope to get down to the first level of the dungeon and another rope to get to the Kalphite Queen's Hive.

The hive is located to the west of the Shantay Pass. You don't really need any desert robes, as you'll be spending very little time exposed to the heat. 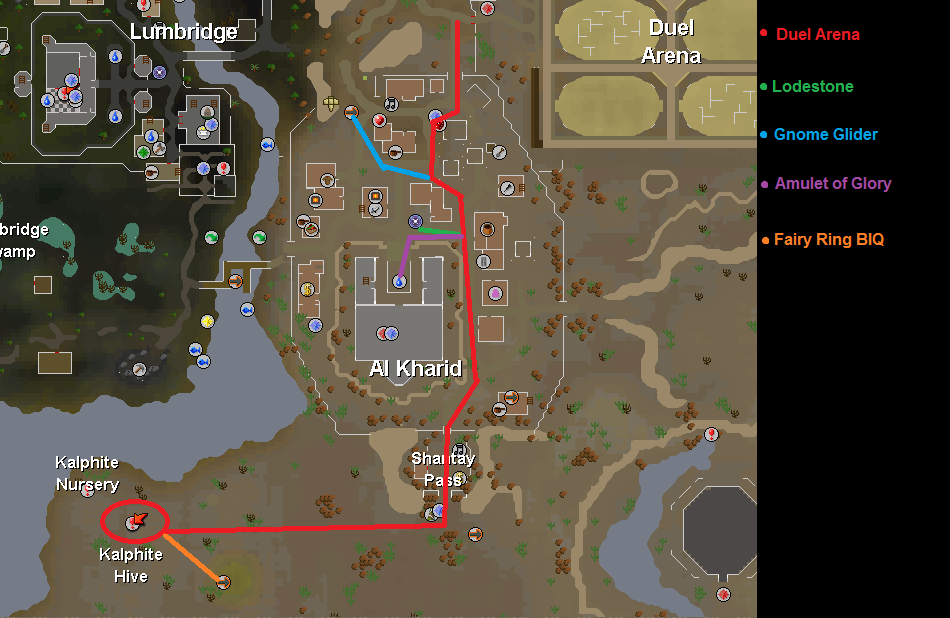 To get to the Shantay Pass, you can use a Ring of Dueling to teleport to the Duel Arena and then walk south. An Amulet of Glory will teleport you to Al Kharid Palace, to which you would walk out of the palace and follow the same red path south. If you have unlocked the Al Kharid location on the Lodestone network, you may use the home teleport to arrive at this Lodestone and then walk south. If you've gotten far enough in the Fairy Tale Part II: Cure a Queen quest, Fairy Ring code BIQ will take you near the entrance. Just walk northwest. You can also use a fairy ring to reach the alternative Dorgesh-Kaan South Dungeon entrance to the hive. The code is AJQ. This route requires a light source. After the Tree Gnome Village quest, you can travel to northwest Al Kharid via the Gnome Glider network. Either walk straight south or walk to the red path and then south as shown on the map. (You'll eventually have to walk a little east anyway)

You will find a hole in the ground, which is the entrance to the dungeon. To be able to get down to each of the levels you need to first use a Rope with the tunnel entrance then select to climb down. This rope will permanently stay there. 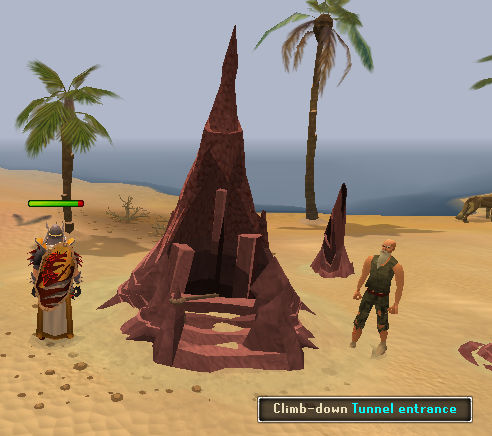 Once inside you can climb out again by selecting to climb the rope. 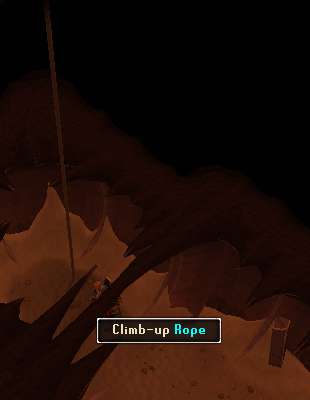 An entrance to the south (marked on the map by a !) is available after the Do No Evil quest, but you have to exit from it at least once from inside before you can use it as an entrance. This room is the third level of the hive, contains Potato Cactus spawns and a quick entrance to the Kalphite Queen's lair. 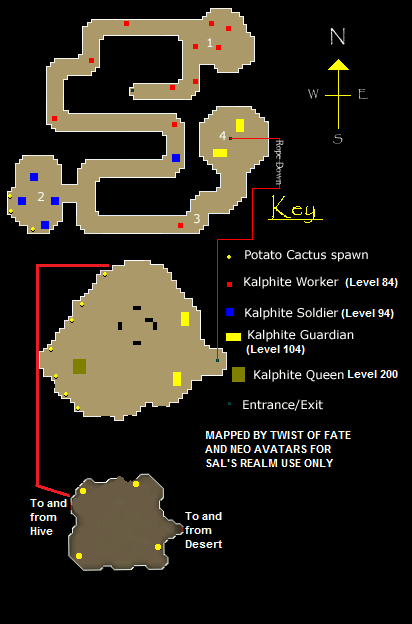 The first attraction of the dungeon is a room filled with level 84 Kalphite Workers that are killed for Slayer assignments. Players will frequently set up a cannon here to quickly get done with their task, so it may take some world hopping to find a clear world if you're on a task as well. The cave to the east in this room is the shortcut to Dorgesh-Kaan. You will need a light source to travel through the tunnel. 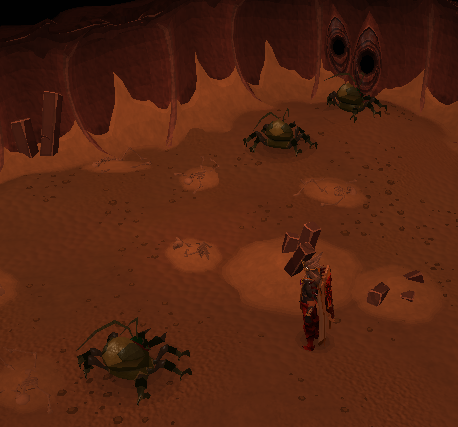 Further on is another room off to the side of the path. This room is full of level 94 Kalphite Soldiers that can poison you. The poison can hit up to 48 damage. These are popular with people using full Guthans, as you can heal more than they hit. Higher level slayers may also choose to kill these instead of the Kalphite Workers because of their higher experience reward. 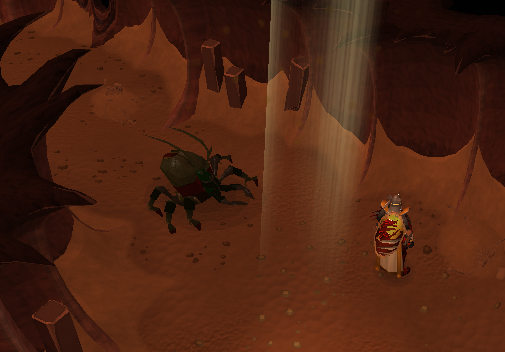 Keep going and you will come to a place where you can attack level 104 Kalphite Guardians (location 3). These are also poisonous. It is possible to use range, magic, or melee with Halberds. To get them to the spot you must go into the next room (location 4) and attack one of the two spawns. Now run back to location 3. If the Kalphite Guardian gets stuck on one of the corners just run into it's path and let it follow you. 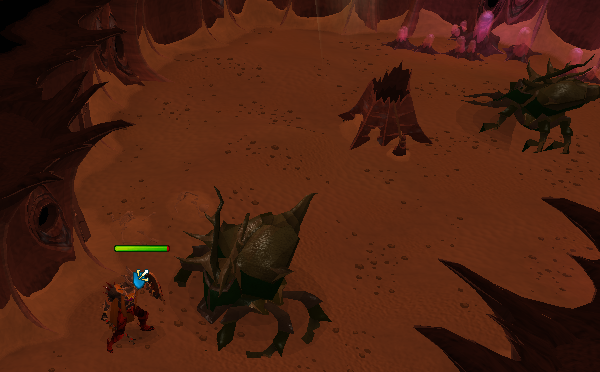 In the room with the two Kalphite Guardian spawns there is also the tunnel to get down into the Kalphite Queen's Hive. As with entering the dungeon you must first use a rope on the tunnel, then climb down it. Be prepared for a fight. 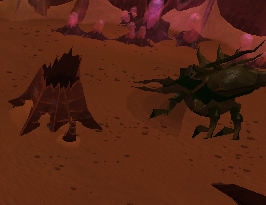 Inside the Kalphite Queen's Hive there are two Kalphite Guardians and a number of Kalphite Workers. This is also the home of the level 200 Kalphite Queen, killed for her Dragon Chain drop. When you enter the room, as long as the Queen is on the western side of the dungeon then there is a safe spot standing beside the entrance rope where you will be safe from the guardians. All the monsters in this room are aggressive and will attack you even if you don't attack them first.

If you watch the number of Kalphite workers carefully you can tell how long it will be before the Kalphite Queen appears. The more Kalphite Workers there are the longer it will be before the Kalphite Queen appears. If there are about 15 or more Workers then there is over 30 seconds before the Queen will appear. If there are about 7 then you should put on Protect from Magic as the Queen may appear at any moment. When attacking the queen, Turmoil (Level 95 Prayer) is very useful. This combined with a protection prayer will cause prayer to drain quickly, so make sure you've brought your prayer potions. 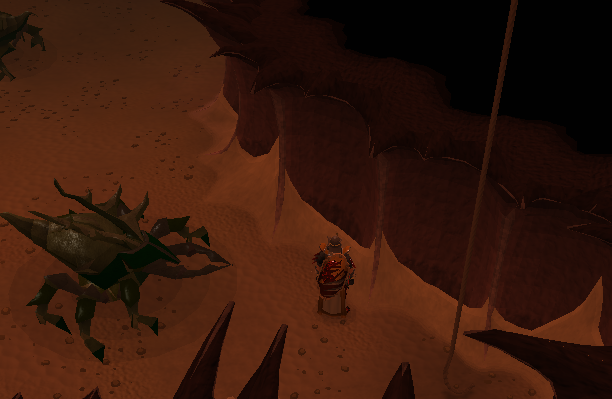 You can use Verac's to kill both forms as it hits through the Queen's prayer. Karil's is recommended during her second form. With two people wearing Verac's each with at least level 110-120 Combat you can kill the Queen in one trip otherwise you will need a group of about 5-8 people minimum with both Melee and Mage/Ranged equipment to even kill her once quickly. When fighting her it is recommended to use the Protect from Magic prayer.

After the Do No Evil quest, you will gain a quick exit from the lair located to the north. You will be brought to another chamber with Potato Cactus spawns and come out just south of the entrance. 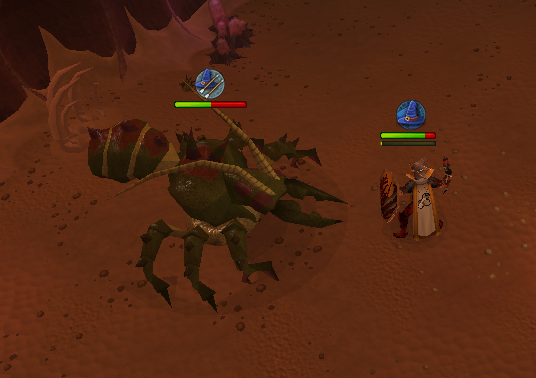 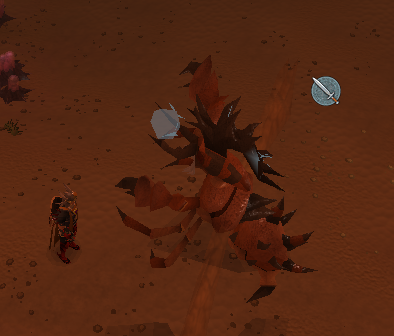 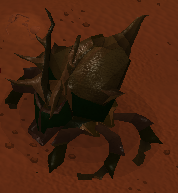