The Karamja Dungeon, which lies under the infamous volcano in the north of Karamja island, is a popular dungeon for mid and high-leveled players. Its inhabitants are Skeletons of all tastes (from level 22 to level 45), your everyday Deadly Red Spiders (level 34) and their eggs; and for high level players, there are lots of Lesser Demons in the Volcano chamber and near the Wall passage and the Mighty Elvarg for those seeking to slay a Green Dragon and prove themselves worth of wearing a Rune Platebody, which all chicks dig. Elvarg is only accessible from the crash site in Crandor Isle until you finish the Dragon Slayer Quest.

The dungeon itself is located below the Karamja Volcano, which is found to the west of Karamja village and to the east of Brimhaven. Just climb down the dungeon entrance at the top of the volcano to enter the dungeon. 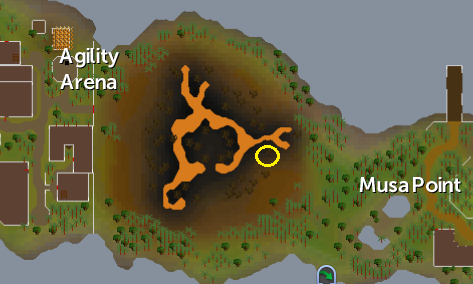 This rope leads up to the mouth of the Karamja Volcano. You can find level 22 Skeletons roaming around, four Gold rocks that are very un-crowded. 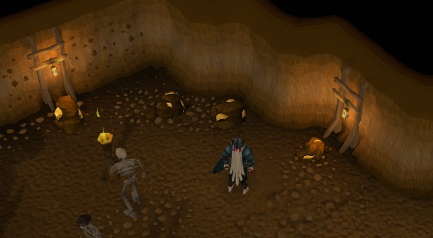 Right after the Skeletons' place, level 34 Deadly Red Spiders have established their lair, where they attend to their valued eggs, which adventurers often scavenge for brewing strength potions along with Limpwurt roots and five gold pieces in Varrock's Apothecary and some mosquito cake spider's style. 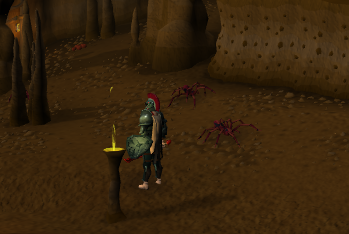 South of the Red Spiders' Area, there's the Lesser Demons (Level 82) area. It's just like Miami, but with fewer tornadoes and more lava. There are a few rune respawns (obviously fire runes). 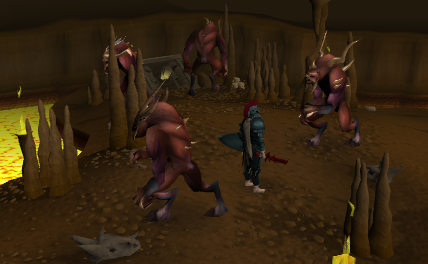 Notice: You must have at least crashed on Crandor during Dragon Slayer to pass from here!

North of the Spiders Lair, a passage apparently leads to a dead end. If you already passed from there while doing the Dragon Slayer quest, you can open a hidden passage in the wall! Too bad that you barely got the time to move it a bit that a Lesser Demon will pop up and try to boil you in your armour with its magic. 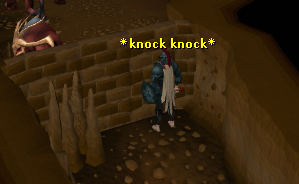 This place is a little bit nicer than the southern place, mainly because the bloodstains left by unfortunate adventurers are less visible on the darker ground. There are some handcuffs on the wall: rumors are that those lessers seldom capture those who dare to fight them, tie them to those handcuffs, and start training for the yearly darts championship.

Elvarg the Green Dragon (level 83) lives in a place of its own, in some ruins near the level 45 Skeletons place. Having lost a bet long ago, she's condemned to stay there forever and witness the endless stream of newbies that look forward to kill her in order to get the ability to wear Rune Platebody and the possibility to brag for a few minutes with one's online friends. Enjoy your little moment of glory, because you can kill her only once. Rumors are that her place will be taken by the KBD once a more powerful monster comes to existence. 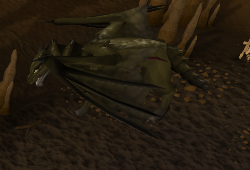 level 45 skeletons roam around this area, guarding the door leading to Elvarg's lair. Some say that they were once giant warriors that got eaten one by one by Elvarg as snacks. Now that they're just a bunch of bones kept together by some rusty iron wire, Elvarg has significantly dropped in weight, relying on curious newbies and brave hamster warriors to keep a small but steady food supply. 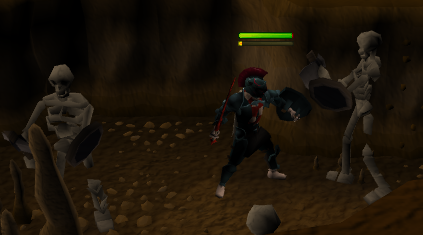 Here the Karamja dungeon comes to an end, guarded by some level 25 skeletons. Climbing the rope will take you to the top of Crandor Isle. Congratulations, you've now crossed Karamja Dungeon unscathed! Well, almost. This guide does not guarantee in any way you'll get to Crandor in perfect shape. In fact, it doesn't even guarantee your survival. But it, somehow, helps. 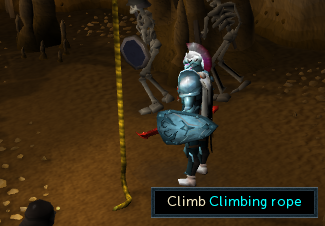 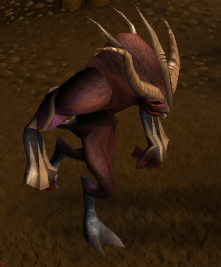