Whether you are questing, completing a Slayer assignment, training your combat skills, or looking to get some great drops, the Waterfall Dungeon can be a very useful area. Located North of Ardougne and South of the Barbarian Outpost, the dungeon is a key location in quests such as Waterfall Quest and Roving Elves. Not only that, but the dungeon is full of fire giants that players can fight with melee, magic or ranged combat, and even contains a section available exclusively to those who have proven their prowess in the skill of Dungeoneering. Because of the high-level monsters it contains, the Waterfall Dungeon is only recommended for players with medium to high combat levels. However, for those willing to brave the danger, the rewards include some excellent experience points and drops.

This section simply provides a baseline for choosing which armor and weaponry to use. It does not encompass all items and scenarios. You may find that you need to adjust it slightly depending on your skill level or wealth. 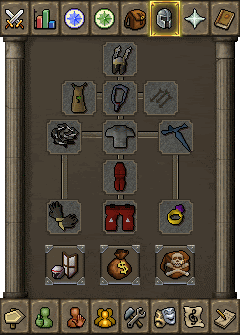 Note: In place of one of the above options, some players may find it advantageous to wear a Guthan's Armor set, in order to take advantage of its special healing effect. This is a good option if you are unable to bring a Bunyip familiar and don't want to worry about bringing food. 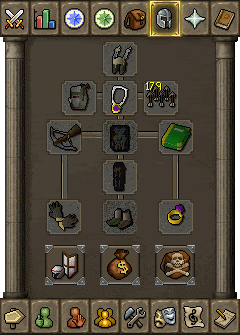 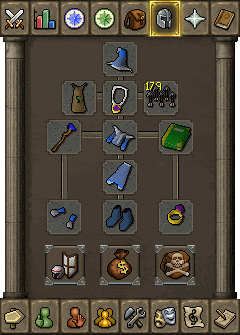 Some players may wish to substitute Full Void Armor for the armor sets above. If you are a higher level and don't mind sacrificing defense bonuses for some extra Ranging/Melee/Magic damage bonuses, feel free to do so, but be aware that you are likely to take more damage if not safespotting.

If you are fighting Fire Giants as part of a Slayer assignment, it might be useful to wear a Slayer Ring in your ring spot. Also, for Slayer tasks, substitute the item in your helmet slot for a Slayer Helm or (if Maging or Ranging) a Full Slayer Helm if possible.

The trickiest part of accessing the Waterfall Dungeon may very well be getting there. To enter the dungeon, players will need a Rope and Glarial's Amulet, which can be obtained in the Waterfall Quest. If you have lost your amulet, see the Waterfall Quest Guide for info on obtaining a new one. The map below shows the route to the dungeon from both Ardougne (red) and the Barbarian Outpost (blue). The outpost can be reached via a Games Necklace teleport or a Lunar Magicks Barbarian Outpost Teleport (Level 75 Magic required). Although the route from the Barbarian Outpost is much faster, it requires an extra inventory slot(s) for the Games Necklace or teleport runes. 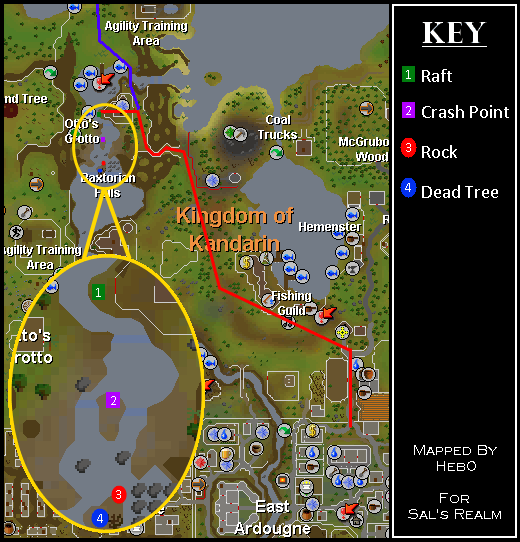 After walking through Almera's house (the house on the map with the "Quest Start" symbol on it), you will find yourself near a log raft. With your rope and amulet in your inventory, board the raft. 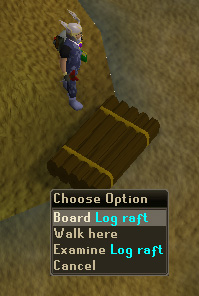 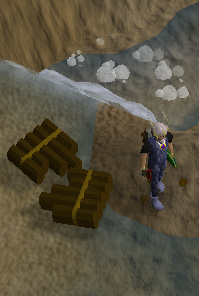 The raft will crash-land on a small island. South of the island is another island, with a large rock on its north edge. Use your rope with the rock to make your character lasso it and pull his/her self across the water to the second island. 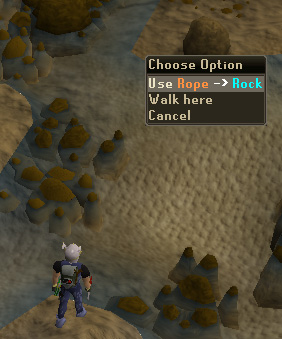 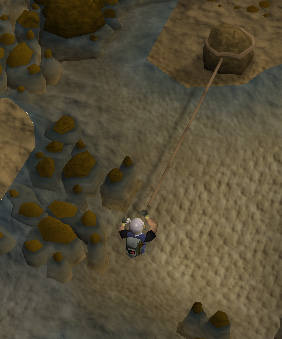 There is a dead tree on this island, right at the waterfall's edge. Use your rope with this tree, and your character will lower his/her self down to the ledge. 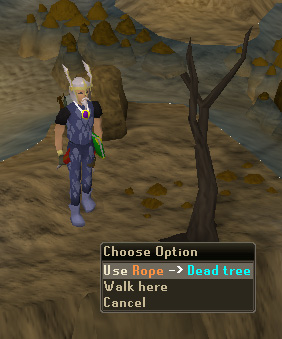 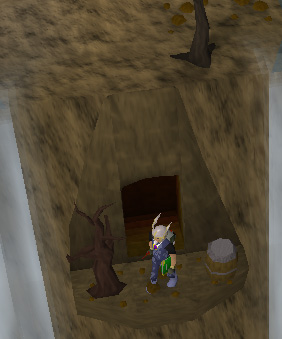 Note: If, after the raft crash-lands, you realize that you have not brought your rope, you can simply click the tree and you will be washed downstream to a house south of Almera's. 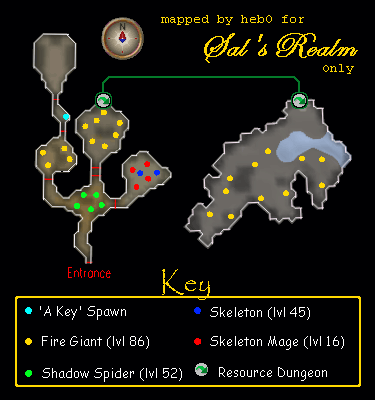 Upon entering the dungeon, you will find yourself faced with a crowd of Shadow Spiders. They are only Level 52, but they can be quite an annoyance due to the fact that they are able to reduce not just your Lifepoints, but your Prayer points as well. If you are not engaged in combat (that is, if you do not have a damage bar above your head) they can attack you, immediately reducing your prayer points with their first attack.

Beyond the entrance room, the dungeon is divided into three other rooms, each separated off from the main one by double doors. Each room has a particular use, whether it be training or questing. When entering any of these rooms, it is advised that you shut the door on your way in to prevent the entrance of any Shadow Spiders. Beyond those initial three rooms are two others, each with a unique function. 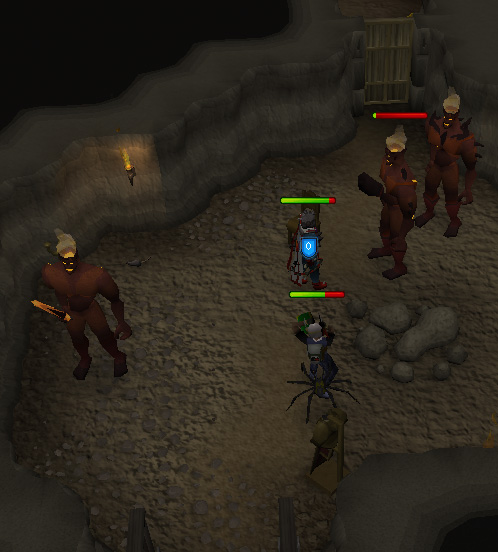 This room is traditionally used by Rangers, Mages, and Meleers using Halberds, due to the large number of safe-spots it contains. Although the layout is great for training without being dealt damage, the drawback is that this room only contains four Fire Giants. The giants are aggressive, so if you don't wish to take damage, you should start by using the doorway safe-spot, where you cannot be attacked by a giant while you are in combat with another. After ten minutes, the giants will stop auto-attacking, and you will be free to move to one of the other, more convenient safe-spots throughout the room.

In order to prevent having any damage done to you while Maging or Ranging, you should use this safe-spot during the first ten minutes you are in the room. 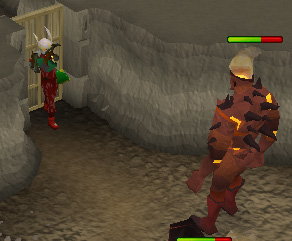 Position yourself at the back of the corridor between the East Room and Chalice Room. It may be necessary to run forward a space or two to engage a giant in combat, but after you have cast your first spell or fired your first arrow, you should immediately retreat as far back in the corridor as possible so the giant cannot deal some quick damage.

These safe spots can be efficiently used after you have been in the room ten minutes, as they are a bit more convenient than the primary one.

Warning: If you attempt to use these spots before you have been in the room ten minutes, you may be attacked by other giants when they respawn or get near you, even if you are already engaged in combat.

Chair and Rock: The gap between the chair and the rock in the middle of the room is too narrow for the Fire Giants to pass, and by placing yourself on the opposite side of it from your opponent, you will be safe from any attacks. This is a convenient safe spot for picking up drops. 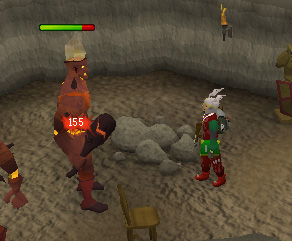 Suit of Armour and Rock: Like the Chair and Rock safe-spot, the giants cannot pass through this gap. It is also convenient for picking up drops. 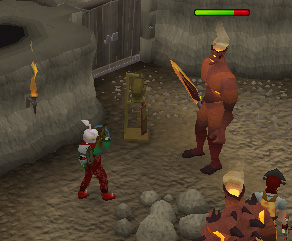 Rock: Place yourself on the opposite side of the rock from your opponent, or maneuver yourself so that a corner blocks the way. This is not the most convenient spot because, unless you are directly across from the fire giant you are facing, they may move around and attack you. Picking up your drops takes longer from this spot. 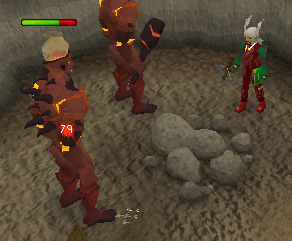 Chair: Position yourself so that the chair is between you and your opponent. It's a bit more convenient for picking up drops than the Rock safe-spot. 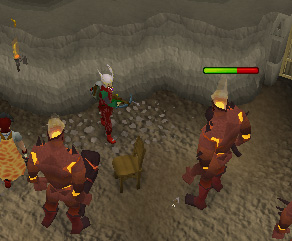 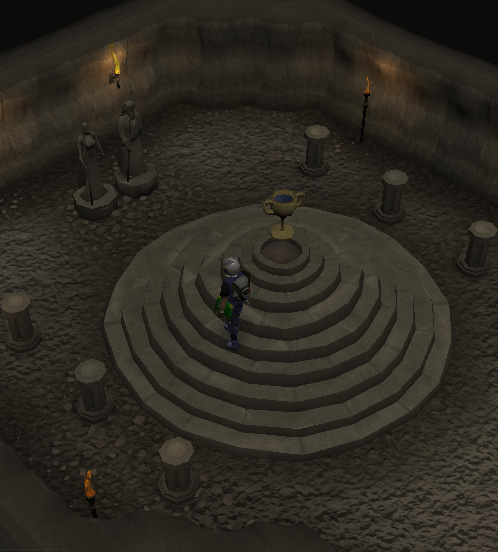 On the North end of the West Room there is a locked door that can be opened using 'A Key', which can be found in the East Room. Beyond it is a respawn of the same key. This is followed by another locked door (also accessible by opening with 'A Key'), which leads to the Chalice Room. 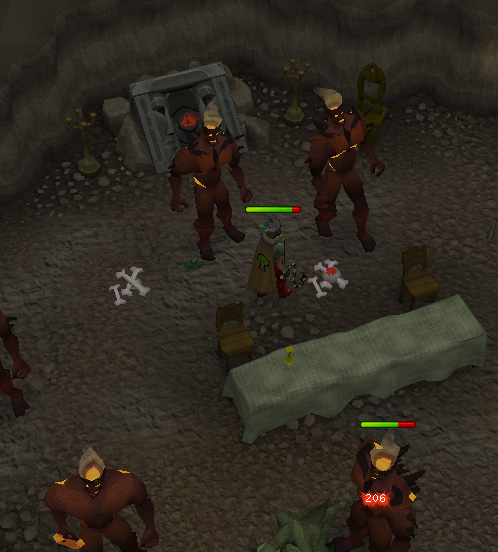 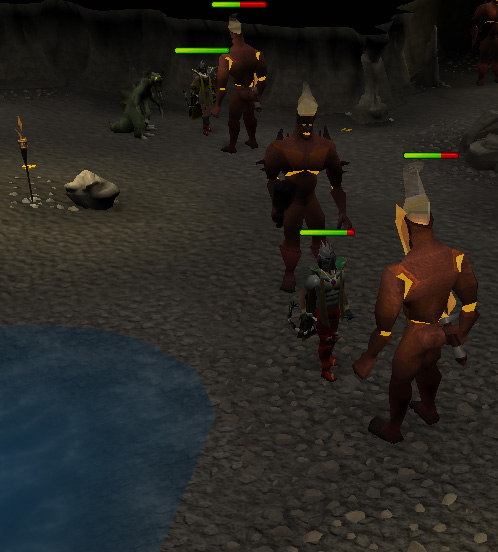 The Waterfall Resource Dungeon is accessed through the via the 'Mysterious Entrance' located in the Center Room. While it does not contain many safe-spots for Rangers or Mages, it does contain eleven Fire Giants, and can come in handy at times in which the East and Center rooms are crowded with players. 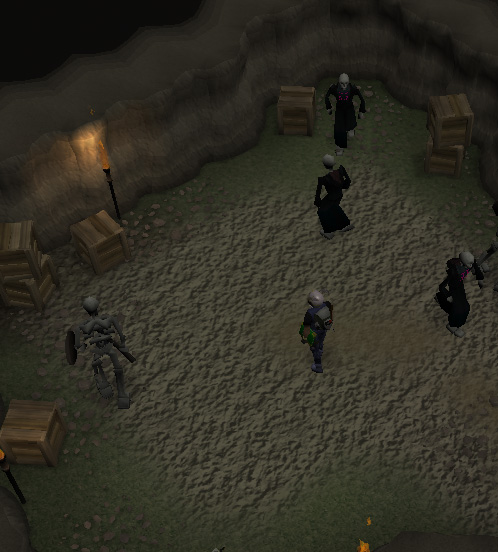 This room contains no Fire Giants, but rather Skeletons and Skeleton Mages. It is not generally used for training, but by searching the crates in this room, you can find 'A Key', which is used in the Waterfall and Roving Elves quests and can be used to open the two locked doors located beyond the West Room.