Humpty Dumpty sat on a wall.

Humpty Dumpty had a great fall.

Let's look at the evidence. Here is Humpty Dumpty (rest in peace), having not yet 'fallen': 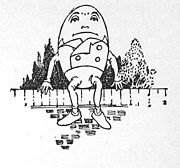 Here, Mr. Dumpty (rest in peace) looks pretty confident, by the standard of eggs' anyway. He seems to know the deal with sitting on walls....dare I say he might have been bit of an expert at sitting on walls.

The question arises, then, how did he 'fall'? When was the last time that wall had it's safety risk analysed? Where even is this wall?

After the 'fall', the poem reports that the king's horses and men were unable to aid him. What the hell were horses doing trying to complete such a delicate exercise as repairing a smashed egg? They probably just trampled on him and made it worse! On top of that, even the king's men were just regular soldiers....they didn't have a clue what they were doing! Mr Dumpty needed a specialist, ladies and gentlemen. And in the final hours of his eggy life, he was denied this luxury. This innocent soul's last moments on earth would have been watching incompitent fools panicking and scrambling around for the super glue (which was also a wild goose chase, super glue had yet to be invented).

True? False? More realistic than my other theory? Discuss.