Zach and I stood fishing on the shores of Port Sarim, rushing our catch to the range at Rimmington. A few yards away, Tabt raised her combat level on over-sized rats. Miles away in Falador and Varrock, MFI and Low-Ki were busily fighting for mining spots. Their ores were smelted into armour for us all.

Someone died halfway across the world. Helm Larder called out in dismay, "I can't get to you! It's hard when you can't get anywhere much in two minutes." It was a sentiment echoed throughout Canting Away. But it wasn't enough to dent the bonhomie. The good-natured reply came back, "It's ok. I didn't lose anything much." Sour notes couldn't last long, when everyone was having so much fun. Adjustments in our reason to be were happening hourly, generally to shrieks of delight.

Respirte was doing us proud. Each time he logged off he moved to the top of mining. The number one miner in the whole of 2007 Runescape - a Canting man! But then someone else would log off and the registered XP would knock him off his perch again. He'd mine more ore and the great dance went on.

Meanwhile Warlock, Kicker and Alex were putting themselves through the toughest challenges. They were completing quests like Galadriel's Amulet, charging past bosses with little in the way of combat levels. Laughter, cheers of triumph and smug victory awaited. They emerged as high leveled players at just level 24 combat. Plus Warlock had another mission, which he'd vowed to accomplish.

He needed the combat levels to get through Paterdomus - to complete Priest in Peril - because on the other side of that dreadful river is Canifis. And in Canifis, there is a shop. And in that shop, there is a hat.

There was a prize of freshly caught cooked shrimp for the first person to reunite me with my hat.

But that was all in the future. First there was this. 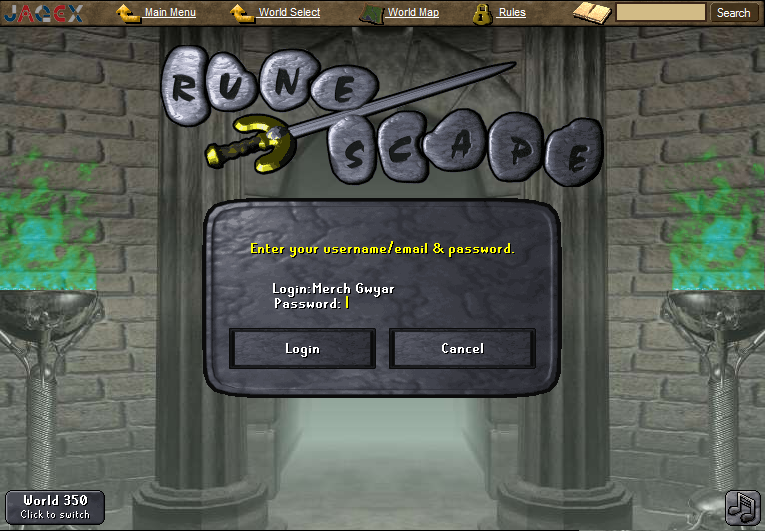 The utter freaking delight of that music, that screen, those flaming torches and the old, old interface. I was bouncing in my seat here, thrilled to bits and mistyping what came next in my bid to be inside.

I made it in eventually and gleefully skipped towards the first tutor on Tutorial Island. I remembered this back then, and how long it took me to walk out how to range a rat. The past was superimposed upon the present; and it was wonderful. I had to restrain myself from giggling, 'I know!', as the cooking tutor told me how to make a loaf of bread. I wanted to hug the blissfully unaware mining and smithing tutor, as he reeled off his speil about furnaces and ores.

They were ghosts and I was amongst them. They were living reincarnations of something thought lost forever. An historian's dream to be there, moving amongst them, interacting with the past. 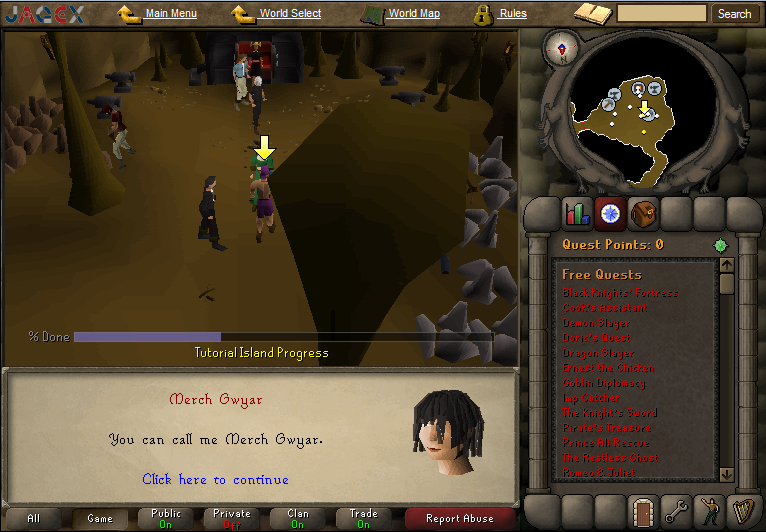 There were so many people there! Even from Tutorial Island, you knew that the worlds would be vibrant and full. We couldn't talk on there, except with the tutors, but out in Gielinor we would. There the happiness was given expression in the constant exclaimations, as each old familiar sight was viewed once more.

Oh! Lumbridge! I could log onto 2013 and walk along its beautifully rendered, high graphics streets, but I still missed it. This was the Lumbridge which I wished to see. MFI called it correctly. He said that 2007 looked like something a third year university student knocked up in his bedroom; and that was brilliant. Yes! That is precisely it! There is a friendliness to the 2007 graphics, which couldn't be carried into the high polish of 2013. It felt like something we were all in together.

I danced on the streets of Lumbridge. I leapt for joy alongside the castle walls. I followed the fence off into Draynor, because that's what I did back then! Only then it was so I wouldn't lose my way. The fence led back to Lumbridge, where it was safe. As for the rest of Gielnor, here there be dragons. I followed the fence now because I was chasing nostalgia, not because I didn't know my way.

Warlock had already diverted the old Canting crowd into the original clan chat. They were all there waiting, like the party had never been over, like the chairs had never been stacked against the wall and the lights switched off. And when Zach logged on, I admit that there were tears in my eyes. Something lost came back. After the horrible losses of the last few years - in a much wider scope than Runescape - the universe handed something back. Perhaps it's not too hyperbolic to call it a balm to the soul right now, at least for me; and, judging by the happy calls all around, for others too.

When I think of 2007 now, I forget the long hours spent working off a year long redundancy notice at the university; the pain of a sprained knee is finally receding in my memory, along with the mud of that year's Glastonbury Festival. Instead I remember Runescape, during the year that I found it, and all that's wrapped up in recollections of selling rings of life in Edgeville Bank. 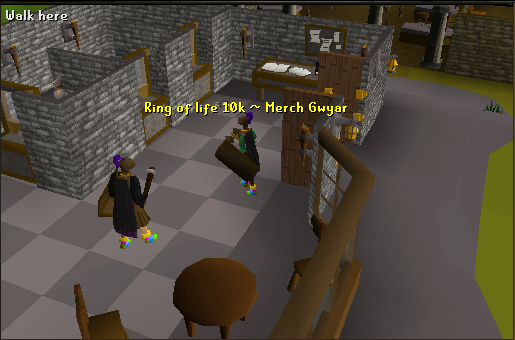 Low-Ki humouring me through a nostalga kick reconstruction.

The beauty in walking through Gielinor, or fishing, wood-cutting, fighting, coooking, mining, smithing and questing, was not only in the sense that we can somehow go back in time and do it all again. It was in witnessing everyone else feeling the same. Like sins, time and trauma could be washed away in a virtual time machine. Every time another Canting person joined us and went 'wow', I grinned that little harder.

Doing the quests too took on a new gleaming layer of delight. The first time I ventured into the Stronghold of Security, it was with decent enough stats, but alone. This time, it was with Tabt, MFI and Low-Ki, with hardly a stat to rub between us. But Low-Ki and MFI had made our armour; MFI had plotted our course; Tabt had trained the combat to lead us through; and me... well.. it was combat, so I was as useless as ever. I provided the confusion, the screams and the extra challenge for the rest of them in keeping me safe.

Completing it was almost as satisfying as getting through a decent grandmaster quest in the main game. It was certainly much more fun! 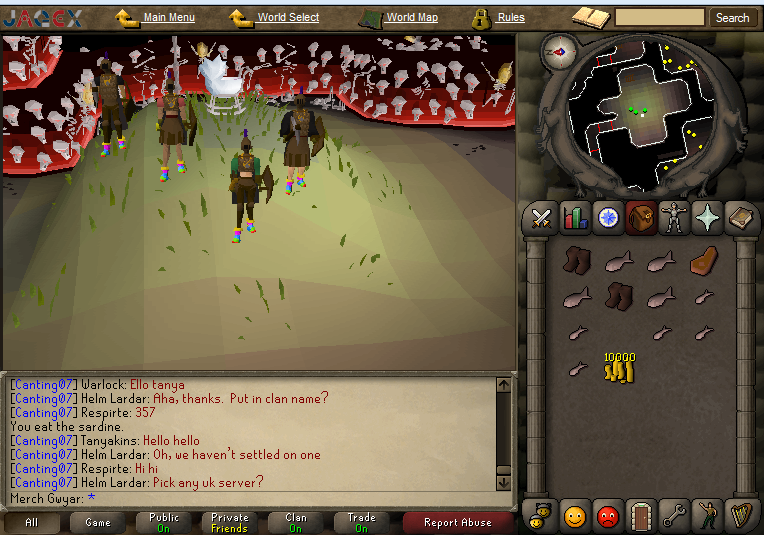 This was gaming at its finest. No-one standing on street corners yelling out gold farming URLs. No-one yet being nasty to froobs and noobs (because we all WERE froobs and noobs). The worst kind of PKers not yet strong enough to enact an effective lure of the innocent. The best sort of PKers already realizing in ecstasy that they can now repeat all of the old tactics, the death dot and more.

People helped one another in Gielnor last night. Strangers joined in quests. The original taxis between the towns moved in snaking congo lines along the byways. Even the competition was friendly. As Respirte mined his way to number one, his main competitor joined Canting too. They were chatting amongst us, even as their pixel pick-axes strove to strike the other from the head of the hiscores.

And as for Warlock, he got his combat levels. He did his quest. He brought me flowers and collected enough gp to make a purchase on my behalf. Once, back in the day, I'd stepped into the Wild wearing my first hat; and I'd lost it. Warlock swore then that I would never be without my hat in Runescape for as long as he was still playing. He bought me ten hats to stick in my bank to replace that one which was lost.

But 2007 made it so much harder to fulfill that oath. In truth my offer of a prize of shrimp was half in jest. I didn't think anyone would actually put themselves through the rigors necessary to claim it. Until one did. 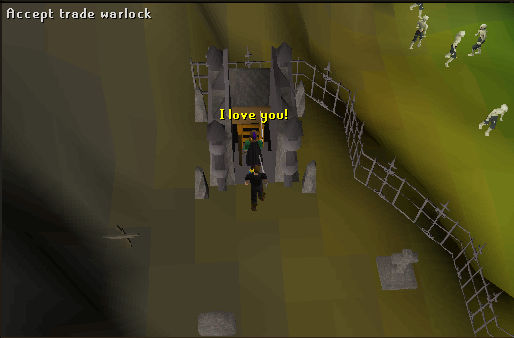 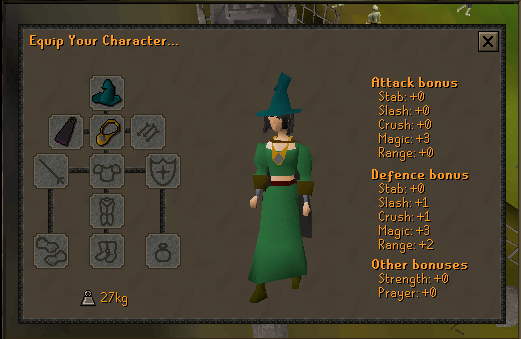 Warlock went to Canifis and he brought back my hat. And another as a place-holder for my bank. What can I say to something like that? Other than thank you and here's fifty caught and cooked shrimp. 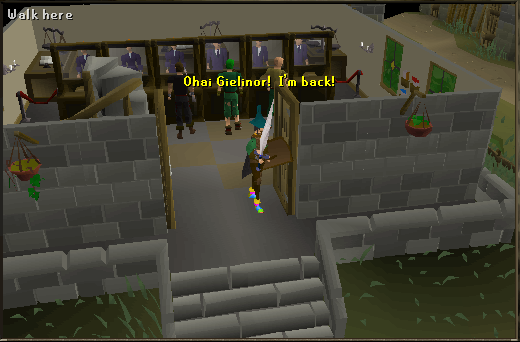 But what do I mean by that? I mean that I'm back so long as this is included in the price of the main game. Right now, it's pretty much free, because a vote gives you your first month free of charge. In short, voting now means that you don't have to pay for a single month of gameplay, in the main game or 2007. Fiscal sense, really; as the money that you do spend pays for the second month.

I'm struggling to make ends meet IRL. I haven't got the extra $15 nor $5 to spend on any game. I could just about meet the normal membership rate. That will take 500k votes on the poll. It's currently at 323k. If we don't meet that, then I'll milk the experiences of having 2007 back for all its worth during the next month, then try to gracefully bow out. It's the graceful part which will take the effort. The rest gives me no choice.

I also want F2P in 2007. It's not the same without them, though Jagex's anti-F2P stance of the past few years is going to make this a Herculean effort. I wish I had money enough to buy them all membership, but I'm more likely to be joining them. The world isn't fair and not everyone has the same recourse to funding. There are parents out there who have a choice between feeding their kid or buying a Runescape game-card. Which parent in the world wouldn't opt for the bread on the table?

It will take 750k votes to extend a hand to our F2P friends. I'm not at all confident that will happen. Even if we got 500k, then it would take an extra 250k people to want to be that kind. The push will be for 500k and then it'll fizzle out. As a society, we've never been that brilliant at reaching out to lift up the poor.

Finally, I would have the clan chats interlinked, so 2007 can talk with 2013. Tanya came in yesterday, bitterly disappointed because hardly anyone was in Canting. Well, we were, but in the old style one. There it was vibrant and bursting at the seams. But back in 2013, there were just three individuals - Tanya, a refugee from Sal's and a third whom many suspect may be a bot. This divide and conquer may be one blow too many for those loyal players who prefer the 2013 model. Link them up, so that the clans may talk across the ages.

As for right now, Warlock fetched my hat. It would be rude not to wear it.