I opened Steam today to find that I'd acquired a new item!

... And it was some crappy coupon that I will never use nor be able to get rid of.

But while I was in my inventory, I saw that I had a game that I was planning to give away (and evidently forgot about)! 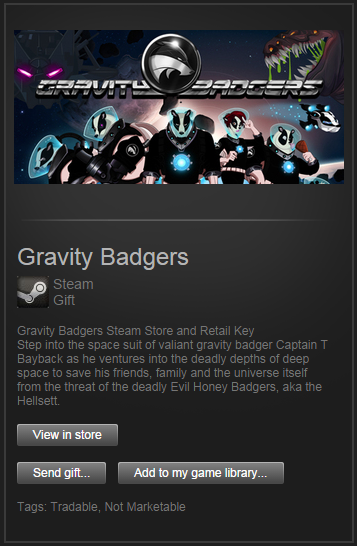 This time will be a lottery, because I don't feel like reading shizzle.

-Guess a number from one to thirty-five. The first one to guess the correct number will win.

-The number comes from a random number generator.

-If you already have Gravity Badgers (which wouldn't surprise me, because it's clearly amazing), don't participate.

-You have one guess every two hours. If you exceed that limit, I'll delete your comment or something even if you guessed the correct number.

-This transaction is only possible through Steam, so have a Steam account or go make one for this awesome game.

-Apparently you have to be friends with somebody on Steam to send gifts, so the tradeoff is that you'll have to be my friend for several minutes.