Back in the day players who considered themselves "PvPers" (or the most used word: "PKers") were essentially split in two very basic main categories: the F2P PKers, and the P2P PKers.
P2P PKing usually involved more risk, as the equipment was more valuable, and weapons more overpowered and dangerous. It made for quick and deadly duels, usually with considerable amounts of gold being gambled. F2P on the other hand was looked down upon by the P2Pers - who considered anyone who did F2P PKing was "below" their tier and level - as well as by a considerable portion of the non-PvP community who merely did not understand it.
F2P PKing, however, despite not as expensive with a rough average of 200k in armour being risked, arguably required more skill.
And why was this the case? F2P fights had a mix of high defense armour and only average damage-dealing weapons. Meaning with appropriate food, and equally armoured/armed foes, fights could last a long time. Much longer than P2P encounters. Because it was impossible to KO your opponent if they were at full Hitpoints or near full, and players would run after expending all their food, an unofficial rule was introduced in the F2P PKing community: the "no-safing rule".

What was the no-safing rule?
Safing was the action of 'eating' / using healing food while above the amount of lifepoints considered 'safe' or free of risk that could cause the player to get 'KOed'. 'Honorable' PKers (or at least smart ones who wanted a chance to earn kills and loot) were expected to maintain their lifepoints at around a low, albeit reasonable amount; so that an opponent could lower their lifepoints with their primary weapon, and with a quick switch of weapons to a secondary, usually much slower but harder hitting weapon, potentially inflict a large hit and KO/defeat their foe. It depended heavily on luck to inflict the important final hit, and fights consisted of minutes doing this 'dance' trying to KO their adversary.
It required better timing, stress control, prayer points allocation and timing, luck and everything else than almost everything P2P PKing required; where damage was consistently high and brutal and less dependent on skill and timing, and rellying far more on specials and luck.

What were/are 'Corrupt Weapons'?
Corrupt Weapons were introduced after the free-trade removal; a system introduced by Jagex to combat RWT/RMT. Essentially - as many of you surely remember - Jagex removed the concept of gifts, free trades/exchanges or item drops to limit/eliminate the perceived threat of RWT/RMT to their game, without any care or second thoughts on how it'd impact the manner the game and it's community functioned.
It was highly damaging to the PvP community as a whole, who no longer received as a reward for killing their opponents said fallen opponent's 'gear', usually expensive. The drops became randomly generated, in a tremendously unfair system that relied on pure luck for the most part, and a weird and unreasonable kill/death average formula.
With the new system now in place, Corrupt Weapons were added as potential drops not just for P2Pers but also for F2Pers, adding a new layer of difficulty to F2P PKing. And why's that? Corrupt Weapons were/are the 'corrupt' versions (aka degradable after x uses) of the famed P2P Dragon Weapons, weapons and armor previously unnacessible to F2Pers.
They hit harder and faster than Rune weapons, and gave a massive advantage to anyone using them, thus becoming highly sough after by the top F2P PKers as KO weapons. Getting a Corrupt Weapon drop was a guaranteed couple mils, and bank made. The chief of which was the Corrupt Dragon Battleaxe, the dream of any F2P PKer. 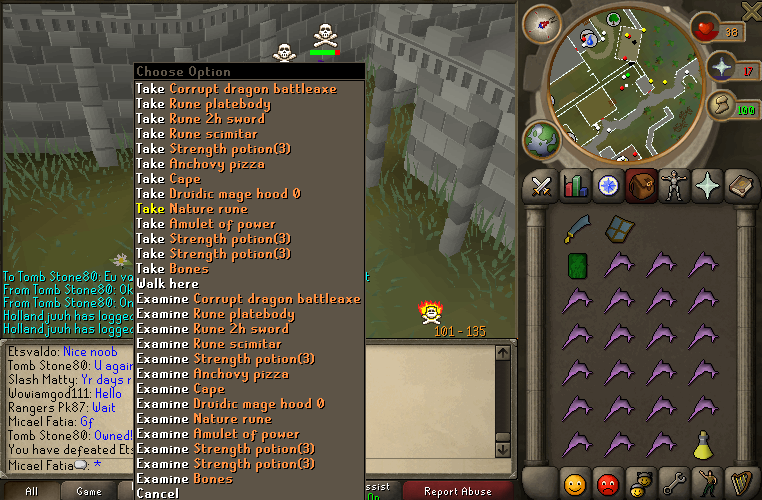 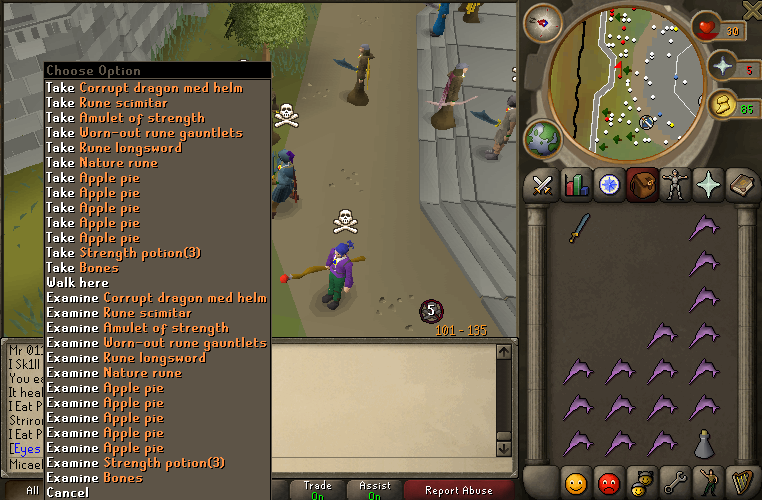 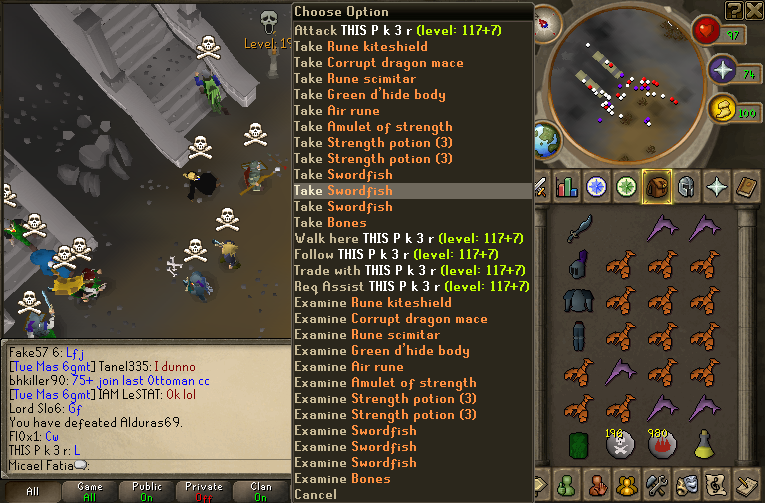 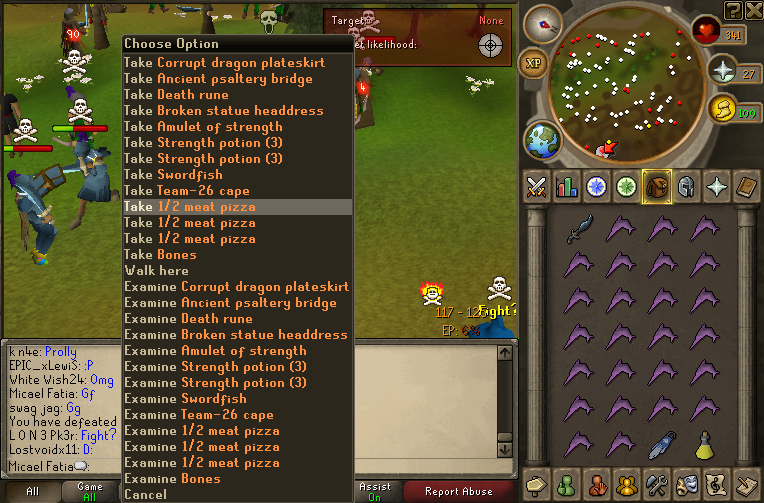 Personal opinion / disclaimer:
I by no means wish to offend or bellitle P2P PKing and P2P PKers. It does require skill, and considerably more risk given that you can get killed much faster and easily, completely out of nowehere with the added bonus of risking more wealth. I have personally however tried both, and always felt F2P appealed more to me, and reminded me more of the RuneScape of old. Both types of PKing similar mainly in the basis that you had to kill your opponent, but very different in the way you went about doing so. Excellent F2P PKers could fail utterly doing P2P PKing the same way expert P2Pers would get their behinds handed to them in a glorious manner trying F2P PKing.