By: iGhost
Special Thanks to: As, Curry Leafs, Desireful, Roy
Original Guide by: Ph201

The Crafting Guild, located between Falador and Rimmington, provides an excellent location to further hone your Crafting skills.

You can walk to the Crafting Guild at anytime, for there are no requirements or obstacles to get to it.

You can cast a Falador Teleport spell, and walk from there. Note that a Magic level of 37 is required to cast Falador Teleport. You could alternatively teleport to the Falador lodestone as well.

There is a landing area for Hot Air Balloons just by the Crafting Guild, making it an ideal form of transportation to get there.

Note: To use Hot Air Balloons, you must complete the Enlightened Journey quest.

You can use a Skills Necklace (enchanted Dragonstone Necklace) to teleport directly to the Crafting Guild.

Note: You need 68 Magic to enchant a Dragonstone Necklace.

Teleport to the clan camp using the clan vexillium (requires that you must be in a clan) and walk southwest.

Teleport to the Armadyl tower using the armadyl token and walk southwest.

Map of the Guild

Here is a map of the area surrounding the Crafting Guild. Click on an area to learn more about it! 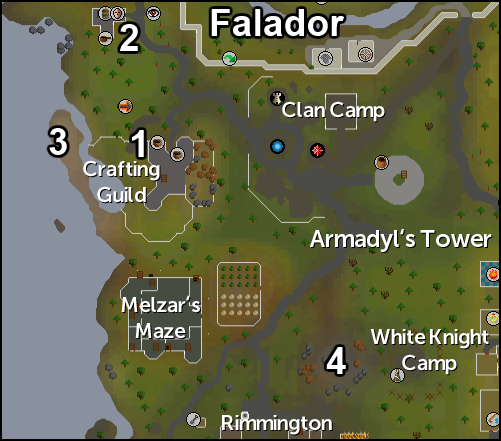 The bottom floor holds the entrance to the Crafting Guild. Upon entering, you will be greeted by the eldest of the three Master Crafters. 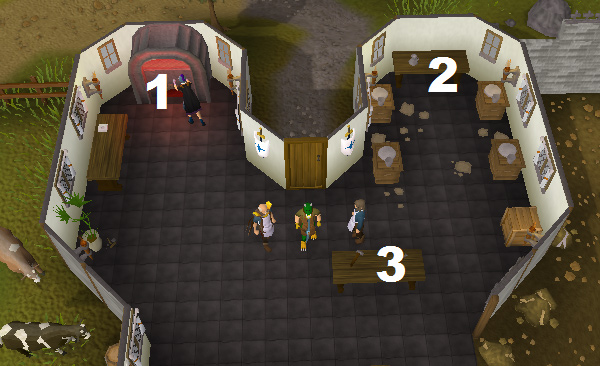 In the northwest of the room you'll find an Amulet mould, and a handy furnace for hardening any pottery you have made.

Here you'll find a Jug respawn, which, when filled, allows to make Clay into Soft Clay. You can fill the jug in a sink just south of here.

This is just a table with a hammer and a chisel on it, which you are free to take.

Containing the most plentiful surplus of Gold and Silver rocks, this mine is one of the most crowded. Freeplayers may have to hop worlds several times before finding a reasonably empty world. There are 7 Gold rocks, 6 Silver rocks, and 6 Clay rocks to be mined here. The nearest bank for storing mined ores is Falador East.

The second floor of the Crafting Guild is very small. 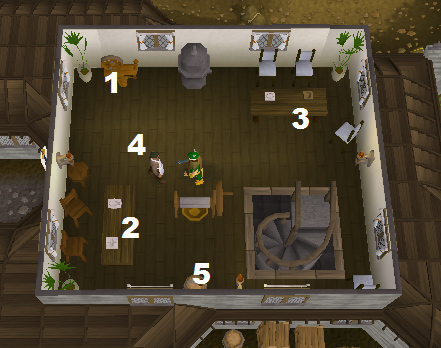 These are two ordinary spinning wheels, which allow you to spin Wool, Flax, and Magic Tree Roots. You can use these free of charge.

Another ordinary respawn; here you can find a Ring mould and a Tiara mould.

This tanner will tan any hides for a small fee, including Cow, Snakeskin, and Dragon. 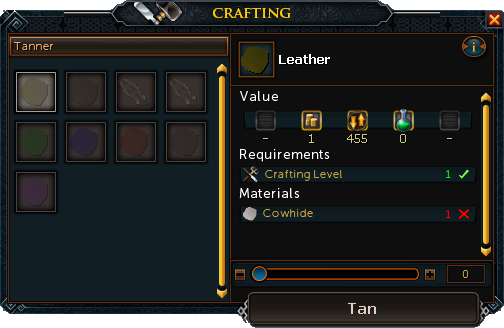 Shears are used to obtain Wool from sheep, and can be found atop this barrel.

Note: the cow field is accessible to anyone, and you do not need a specific Crafting Level to enter.

With 10 cows and 2 cow calves, this makes a great place to obtain your hides. When killed, these drop Cowhide, Bones, and Raw beef. You can get your hides tanned quickly by the Tanner in the guild.

Although not used in the Crafting skill, 2 Dairy cows have been placed here. By Milking them, you can fill your empty buckets with milk!

Note that when standing in the western part of the cow field, you can safely range or mage the Hobgoblins (Level-28, Level-42) on the peninsula to the west.

The Makeover Mage likes to raise sheep, so with the shears from the Crafting guild you can easily get wool here! Note that you may need to attempt this more than once, as sheep sometimes get away. You can spin your wool on the second floor of the crafting guild. 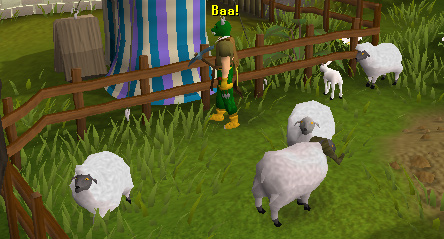 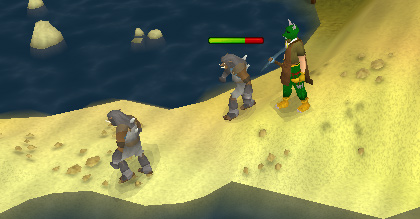 Although not an actual part of the guild, there are two more Clay rocks here should the actual guild be too crowded.

In Rimmington, you can find Rommik, who sells a variety of Crafting tools. Some of these respawn in the guild, but others can be bought here. This is a very handy shop for crafters, as the shop is so close to the Crafting paradise!

The man that greets you when you enter the guild. When you reach level 99 Crafting, you can buy a Crafting Cape of Accomplishment, or Skillcape, from him.