Welcome to Burthorpe, a fighting area consisting of two guilds, a few quests, and a whole lot of trolls! Burthorpe is currently the starting area for all new players and houses many tutors.

From the lodestone interface click on Taverley and you will be teleported after a short time. You must have activated the Burthorpe lodestone to use it.

Teleport to Troll Invasion with a Games Necklace.

Rubbing a charged Combat Bracelet will give you the option to go to the Warriors' Guild, which will put you in west Burthorpe. 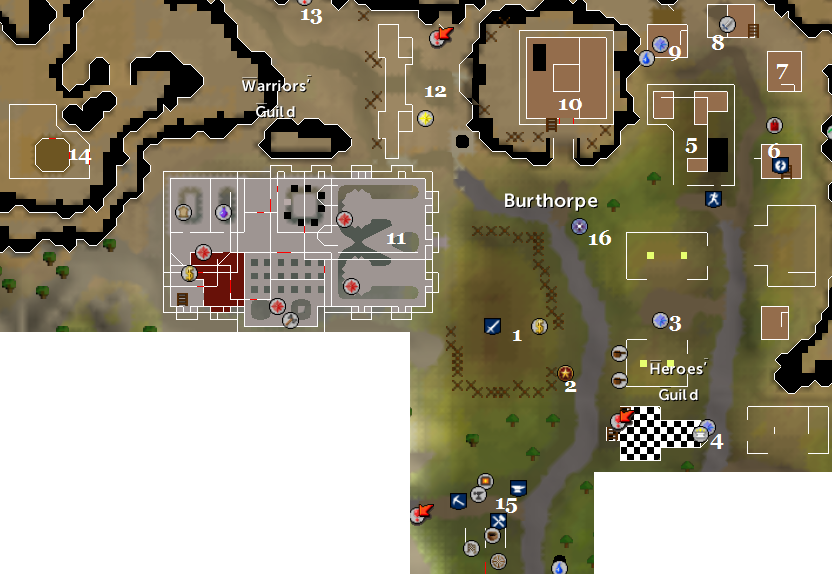 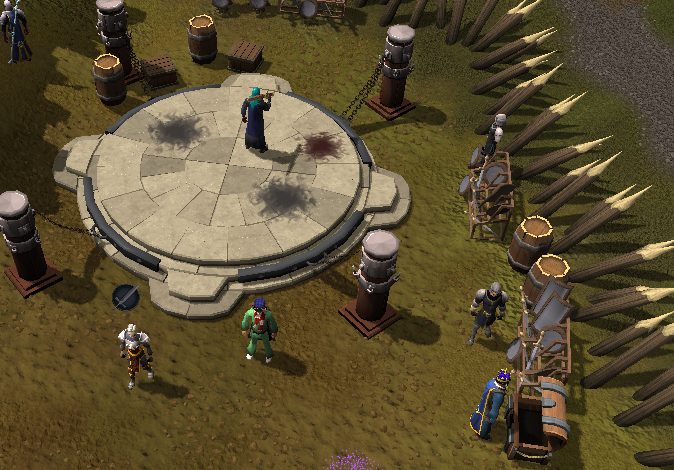 New players used to spawn at this point before the Ashdale tutorial. In the area there is a bank chest and Major Mary Rancour, who is a combat tutor and challenger. You can go to Rancour to retrieve your dwarven army axe. The area is also home to Corproal Boothe, who will sell low level combat equipment. He will also give away a single bronze sword and chargebow for free. 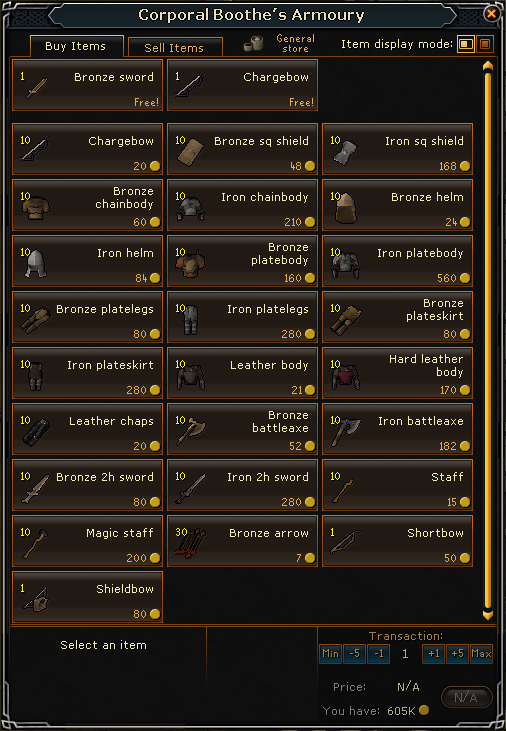 The Imperial Guard Quartermaster is located near the new player start point and the bank chest. Speak to him to obtain your daily challenge rewards. 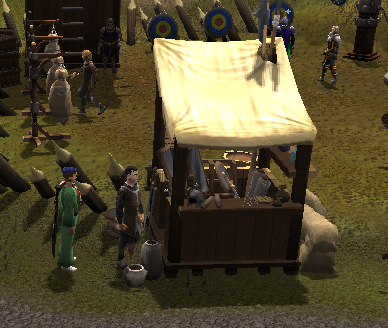 Denulth is the start point for Death Plateau and Troll Stronghold. Around Denulth is a housing room, an infirmary, and a dining room. 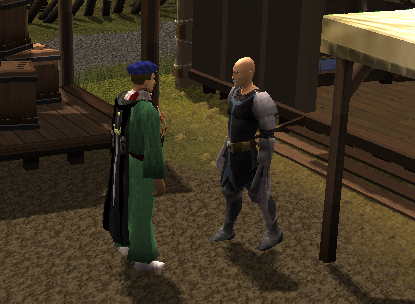 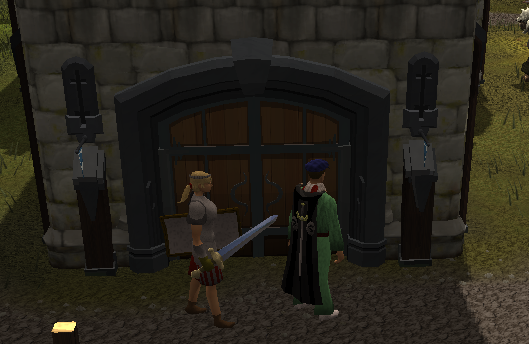 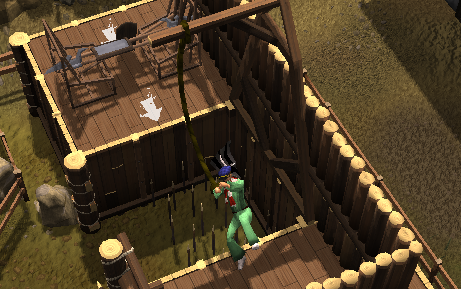 The Burthorpe agility course is a low level course that can be completed by anybody. It is the place for brand new players to train their agility. The agility course gives 80 experience per lap. At the entrance of the course can be found Drill Sergeant Hartman, a fitness guru who would start a workout video the moment he was brought into real life. Jane Fonda's got nothing on him. 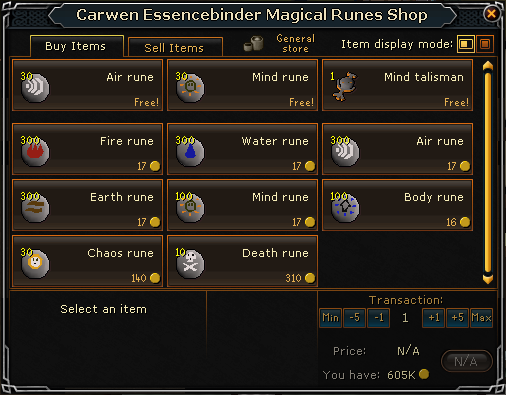 To the south of the building is Tam McGrubor, who you can talk to for informaiton about Wicked Hoods. Outside of a tent just to the north can be found Xuan, who you can speak with to access the loyalty shop.

Hild is a character encountered in the Tail of Two Cats quest. She can enchant your amulet of catspeak for five death runes. 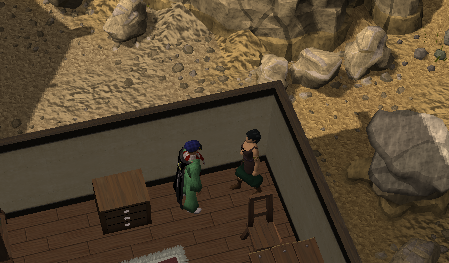 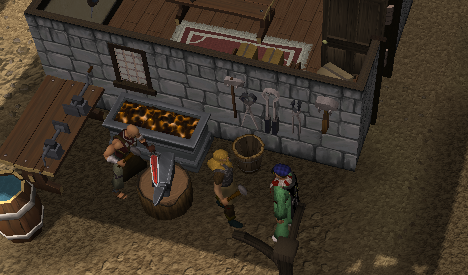 Northwest of Hild's house is a blacksmith. Two people work here. The first is Dunstan, who can be seen hammering a sword on an anvil. He is first encountered in the Death Plateau quest where he spikes Freda's boots. Later, he is seen again in the Troll Romance quest where he makes a sled for your character. Dunstan is also expected to play a major role in the upcoming Sixth Age quests. Maybe. Okay, not really. Dunstan will allow you to use his anvil if you ask and can also repair Barrows Armor. The second person here is Gaius, who can be spoken with to access a two handed sword shop. 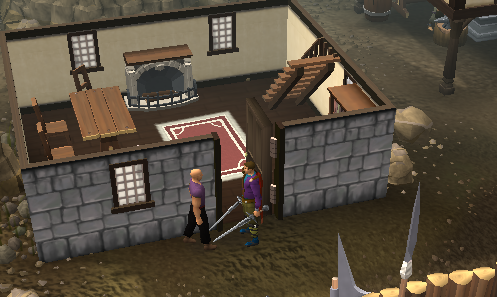 Unferth is the owner of Bob the Cat and the start point of the Tail of Two Cat's quest. 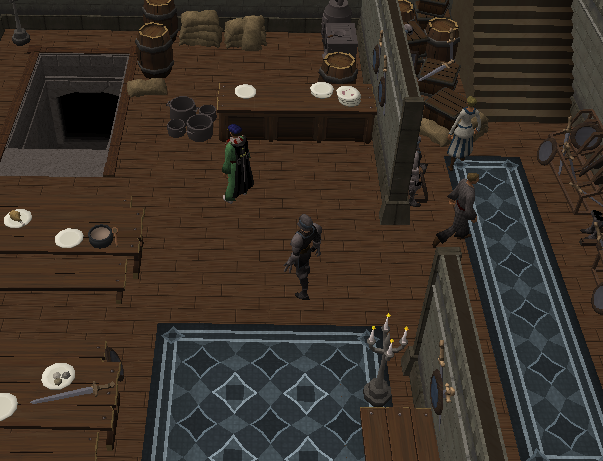 Burthorpe Castle is found just north of the lodestone. The castle has three floors with residents on the bottom, Eohric on the middle floor, and archers on the top. Eohric was once an NPC encountered in the Death Plateau quest but after its refurbishing he no longer plays a role. Now he just tells you information about the castle and the prince, who is currently away from the area. The staircase found in the northwest corner of the ground floor can be entered to access the Games Room, an activity which unfortunately is usually empty worldwide and often forgotten. 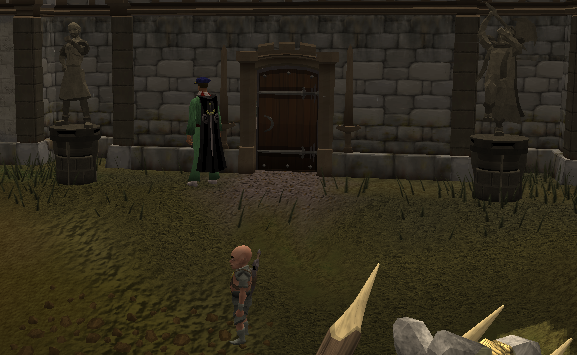 The Warriors' Guild can be found in western Burthorpe. It is accessible to adventurers whose attack and strength levels add up to 130. Outside stands the large and fearsome Ghommal. If you have completed While Guthix Sleeps, Ghommal will be replaced by the small gnome Laidee Gnonock, who is an interesting replacement for Ghommal all things considered. After While Guthix Sleeps you will also see two statues memorializing two fallen Warriors' Guild members. 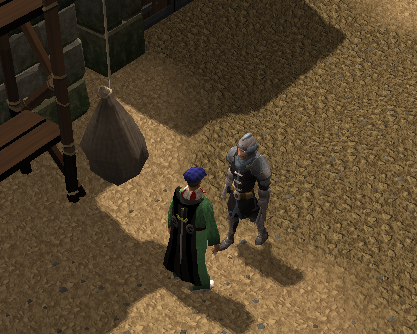 To the north of the entrance to the Warriors' Guild stands Captain Jute, who you can speak to to start the Troll Invasion distraction and diversion. North of him lies a dungeon with level 2 trolls of all combat types. This is a good place to train combat for brand new players.

The trolls located in the dungeon are

Inside the dungeon will also be Corporal Boothe, who has managed to figure out how to be in two places at once. Boothe will sell several items down here although the selection is not as vast in the dungeon as it is outside. 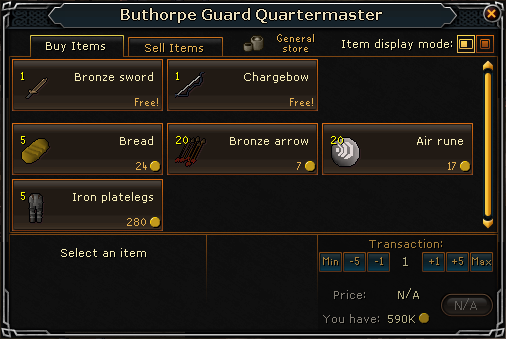 He will also buy some items you pick up from the trolls. 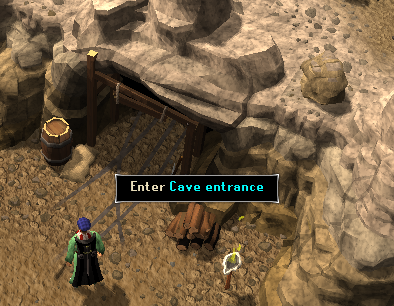 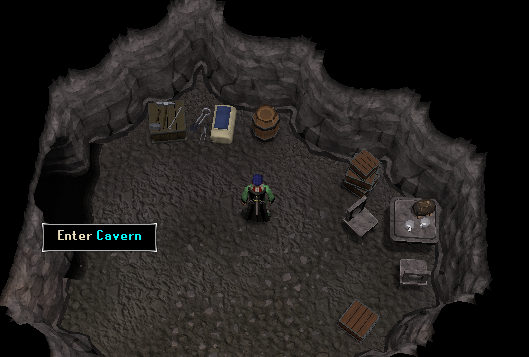 The pass can be entered by clicking "Enter Cavern" on the western portion of the wall. 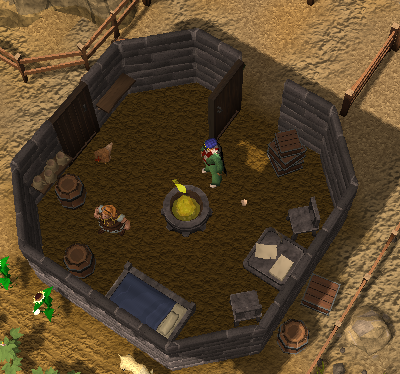 West of Sabbot can be found his wife Freda. Freda lives in a cottage with chickens and potatoes. Freda is an important character in the Death Plateau quest and can be spoken with to buy climbing boots. 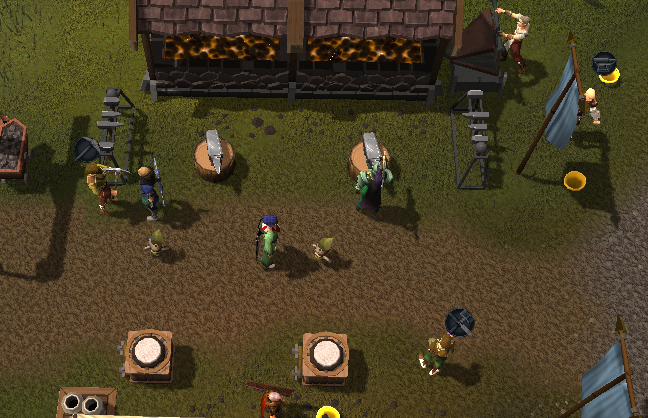 The Burthorpe mine is located in the southernmost part of Burthorpe. It is often considered part of Taverley but part of Burthorpe by name. On the surface there are furnaces, anvils, and pottery wheels. To the east is a well that can be used for pottery purposes. There are also three tutors here. Tobias Bronzearms is the mining instructor and will sell bronze pickaxes for 1 coin each. Martin Steelweaver is the smithing instructor and will sell hammers for 13 coins each. The last instructor, Jack Oval, has a vast inventory of crafting items. 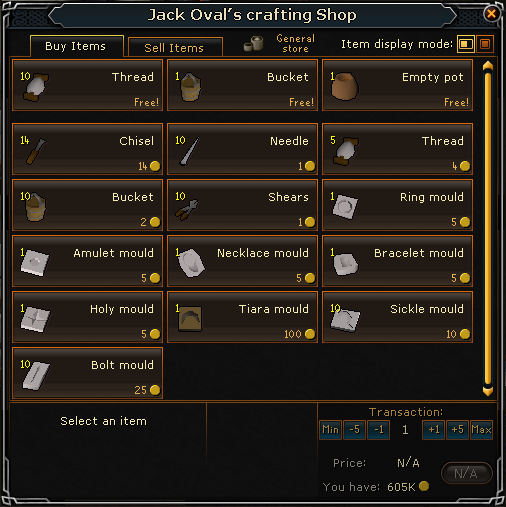 The entrance to the mine itself can be found in the western part of the area. 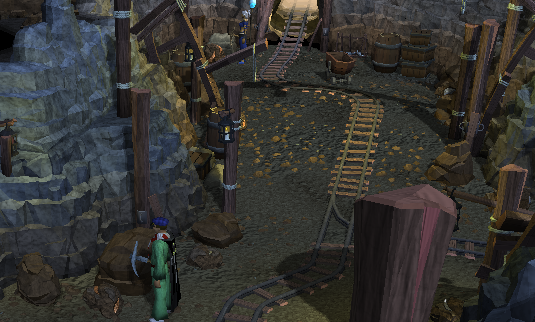 The mine consists copper, tin, and clay rocks. Each rock only has a mining requirement of 1 so the mine is useful for new players. 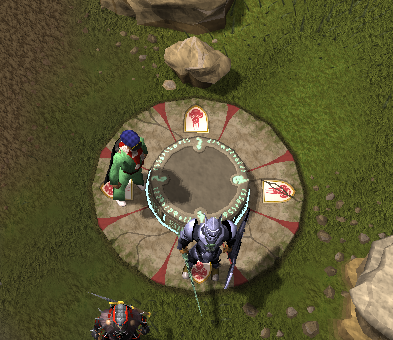 To the east of Freda's house is a potential Bob the Cat spawn.

Among Burthorpe are a bunch of patrolling guards that will march up and down the town. The guards will occasionally attack nearby trolls. If you stand in their way however they will stop patrolling. 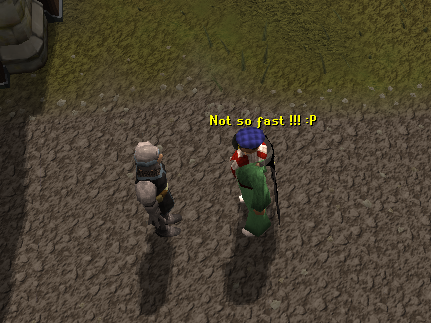 The guard will not stay stuck forever. He will eventually magically disappear and being patrolling at another point.

Burthorpe was of course not always this way. It was overhauled when it replaced Lumbridge as the start point for new players.