The Canifis Slayer Tower is located northwest of the village Canifis, and is home to many various Slayer monsters. You must have completed the Priest in Peril Quest to enter Morytania, and you can optionally complete the Ghost Ahoy Quest for teleportation to the Ectofuntus, and the Desert Treasure Quest for Canifis teleportation.

There are a number of ways to get to the Slayer Tower and all require a fair bit of walking. From the various teleportation spots these are the possibilities. 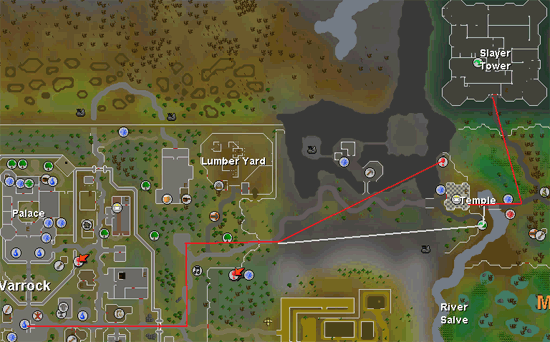 Varrock teleportation. From the central square walk east and exit the town. Turn north and after the fence on the east side of the road turn east. Go through the gate and keep walking east until you get to the Paterdomus Mausoleum. If you have at least level 65 Agility, you can take the shortcut at the south side of the Temple otherwise you will need to go through the trapdoor to the north and through the magic barrier. At the other side turn north until you reach the Canifis Slayer Tower.

This route requires completion of the Ghosts Ahoy quest. After an Ectofuntus telport, take the north exit and turn west. Keep walking west until you reach the Canifis Slayer Tower entrance.

For this route you will have needed to completed Desert Treasure and your spellbook changed to Ancient Magicks for Canifis teleportation. From Canifis pub walk west and at the fork in the road take the rout north until you reach the Canifis Slayer Tower entrance.

Head to Zanaris and use the Fairy Rings. To use the Fairy Rings, you must have completed the quest Fairy Tale Part II: Cure a Queen. Choose the code "CKS" and you will be teleported near a Farming patch. Walk northwest to the Canifis Slayer Tower. 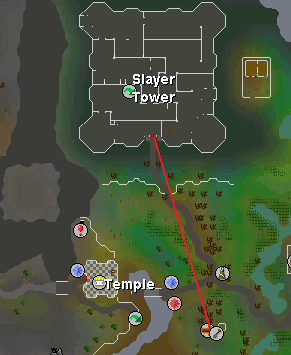 Like the Fremennik Slayer Dungeon this is a place where you need to take precautions in order to survive your ordeal, so beware of a few important things or run the risk of dying.

You'll also notice that listed in this guide are the Slayer monsters you will encounter, along with their Life Points. This is because the number of Life Points they have is equal to the amount of experience gained while on a Slayer assignment divided by ten.

The Slayer Tower has three floors, all inhabited by increasingly difficult monsters with the fabled Whip-dropping Abyssal Demon at the end. 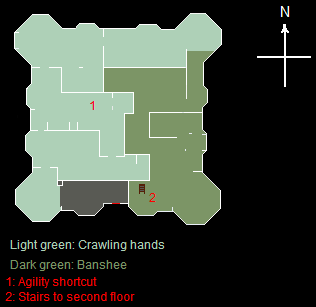 The ground floor houses two monsters who will not go beyond the boundaries in the picture. On this floor you will also find an agility shortcut that leads to the second floor of the tower, you will need an agility level of 61. 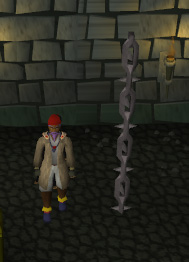 If you decide to climb the spiky chain be sure to equip your nose peg as you will end up in the midst of Aberrant Sprectres. Climbing the chain can result in slashed hands and can do up to 60 damage.

The first monsters you will encounter are the Crawling Hands. They come in two sizes and two levels, 8 and 12 and you need level 5 Slayer to fight these, no special equipment is needed and they are none aggressive.

The second monster is none aggressive Banshee, level 23 and the first one that needs special equipment: Earmuffs, these you can buy at any Slayer master for 200gp. A very good herb dropper which needs Slayer level 15 to engage in battle. Be sure to wear d'hide armour. Even if they fight melee style their attack is magic based. 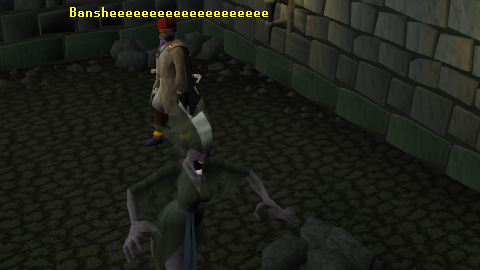 So on to the second floor, the home of three different monsters. Once again these will not go beyond the boundaries of their area. This floor also has a level 71, spiked chain agility shortcut in the north-east corner that will bring you to the top floor. Again this can do up to 60 damage. 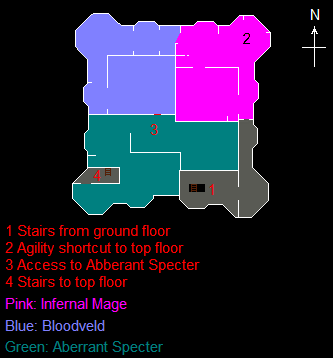 The first you will meet are the Infernal Mages, level 68. These will attack you with a fire blast and can do a lot of damage. No special equipment is needed but again it is wise to wear your trusted d'hide. Slayer level 45 needed to fight these and the "Protect from Magic" prayer is strongly recommended. 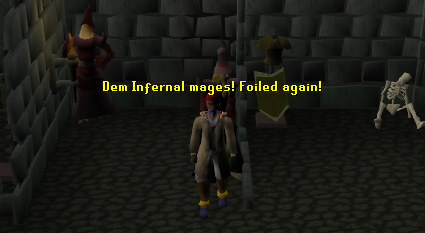 The next in line are Bloodveld, again a none aggressive monster and Slayer level 50 is needed. A big favorite amongst rangers, these are level 76 and have a whopping 1,200 Life Points. Again a magic based attack so be sure to wear dhide should you decide to melee them. As for Slayer equipment: no need for special gear. 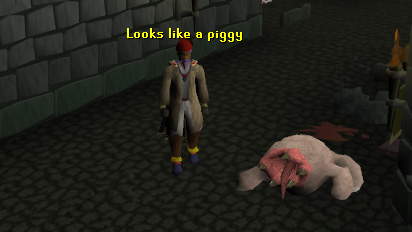 This monster also needs special equipment: a Nose Peg. Be sure to wield it as their attack, when not worn, can not only hit you but also lower your combat stats. They can decrease by as much as 60% in one successful attack. Stay a bit too long without your Nose peg and your combat stats, including prayer and agility will have gone down to 1. The Nose peg can be bought at a Slayer master for 200 gp. 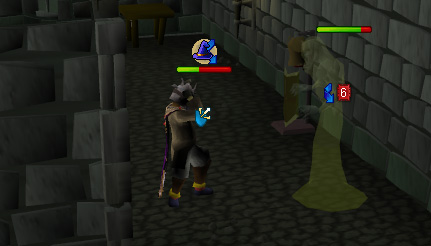 The top floor and the end of our journey to the Slayer Tower. This floor houses the three hardest inhabitants. 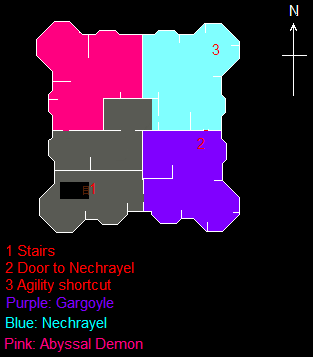 The first one you will meet is the Gargoyle, aggressive towards all visitors and you need a special piece of equipment: a Rock hammer. This can be bought at any Slayer master for 500gp. You need to fight him down to his last Life Point and then use the Rock Hammer on him. Gargoyles are level 111 and need Slayer level 75. 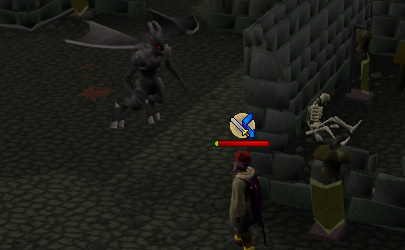 The next monster you will find past the door is Nechrayael at level 115. Non-aggressive but with a peculiar twist, you will need Slayer level 80 to fight it. When you engage Nechrayael in battle he will summon, up to two, helpers that will fight you at the same time: Death Spawn (level 46). Though a single combat area these still will attack you at the same time. When you kill a Nechrayael, the Death Spawns will keep attacking you and your auto retaliate setting will not work: you need to click to attack them.

Killing Death Spawn will not add to your Slayer exp. Here you will also find the spiked chain agility shortcut, level 71, to return to the second floor without going past the Aberrant Sprectres. 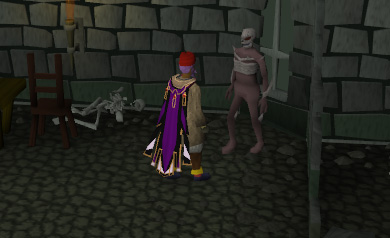 The last monster in the Slayer Tower is the Abyssal Demon, fabled for the Abyssal Whip it will sometimes drop. At level 124 and needing 85 Slayer to engage it is a hard opponent to beat. No special equipment is needed. While fighting him he can teleport you to a different place next to him. Unlike his family in the Abyss this one is non aggressive. 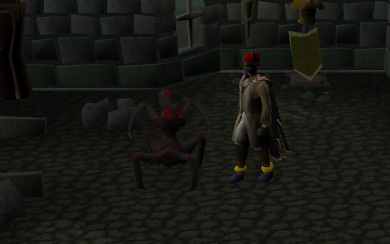 All Mystic items dropped at the Slayer Tower are black and red, while the creatures in the Fremennik Slayer Dungeon drop the white and yellow variety.

Also, the Canifis bank is the closest from the tower, but still a fair walk away so be sure to bring some nature and fire runes with you.