Rimmington is a small town located southwest of Falador and west of Port Sarim. The only way to get to Rimmington is by walking. However, members who have their houses built in Rimmington can used the level 40 Magic Spell "Teleport to House" to reach Rimmington a lot faster. In this town, you can find a Player-Owned House portal, a quest start point, the deadly Melzar's Maze, and much more! 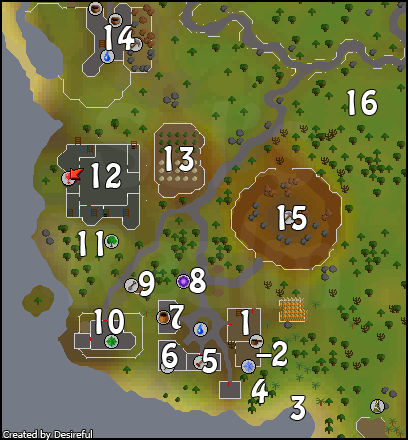 This small house contains a cooking range and a piano. Unfortunately, you cannot play the piano. The cooking range is open to all players for all their Cooking needs. Along the southern wall of the house, there is a sink for filling vials and such with water. In the northwest corner, you can find a Bronze Pickaxe respawn. Upstairs you can find some small attractions. There are multiple bookcases, drawers, a study desk, a large table with a Bronze Scimitar respawn, and two NPCs: Hengel and Anja. They both have the options to "Attack", "Talk-to", and "Pickpocket". 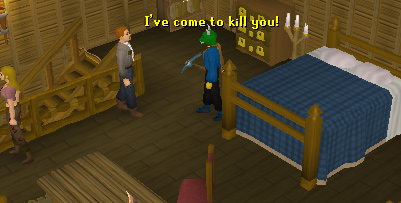 This is the house of Hetty. Hetty is a witch and the start point for the Witch's Potion miniquest. In this miniquest, you need to deliver to her a Rat's Tail, an Onion, and an Eye of Newt. Once you give her those items, she will help you gain a better understanding for Magic and the Dark Arts.

Southeast of Hetty's House, you you can find Skippy, who is the quest start point for Mogre Mini-Quest. He is a little drunk and crazy. Once you complete the quest, he will teach you how to kill Mogres at Mudskipper Point.

West of Skippy you can find eight willow trees. These trees are useful for Woodcutting and Firemaking. 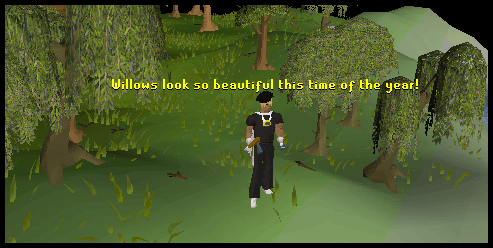 The archery shop can be found west of Hetty's house. Here you can find Brian, who sells a variety of Ranging equipment. Also in this building, you can find a bronze arrow respawn and two log respawns.

To the west of the archery store is the crafting store. Here you can buy a variety of crafting goods, such as needles and moulds.

North of the Crafting Store is a General Store. Players can sell the ores they mine from the nearby mine site to the store. Or, players who are woodcutting can sell the logs they cut. You can also find the basic general store goods, from pots to security books.

This is the portal that will take you to your Player-Owned House, as long as it is in Rimmington. You can start off building your house by buying house property from an Estate Agent. Houses are made and designed using your Construction Skill. After all, there's nothing like having your own home, right? 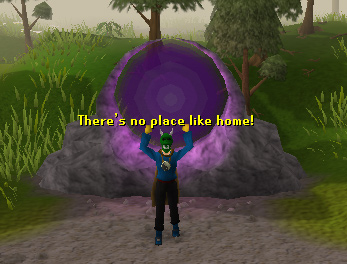 West of the House Portal is the bush patch. Here you can grow bushes with the Farming Skill. You can also find Taria and a Tools Leprechaun. If you talk with Taria, you can ask her to look after your crops. She can also give you farming advice and sell basic farming equipment. You will need a minimum of level 10 farming to plant in bush patches. 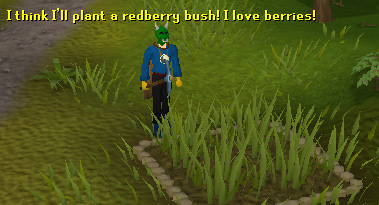 Southwest of the farming patch is the house of the Chemist. The Chemist is part of a few quests, such as Biohazard and Regicide. He can also teach you how to make fuel for lamps. Outside his house are three NPCs: Chancey, Da Vinci, and Hops. The three of them are used in the Biohazard Quest. Once you have completed Biohazard, you won't be able to talk with them, as they will not reply. 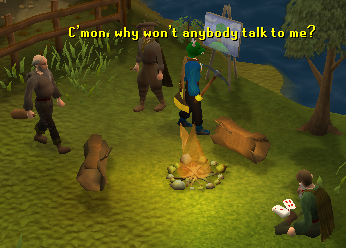 North of the Chemist's house is an area containing a couple of regular trees, some oak trees, and four yew trees. This is a nice place to train Firemaking, since there is no bank nearby and you can burn the logs you cut down. If you do want to bank your logs, then you can go to your house and give them to your servant. They can take your logs to the bank for you. This only applies if your Construction level is high enough and your house is in Rimmington. 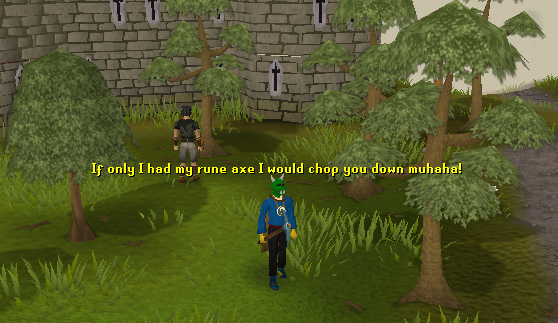 East of Melzar's Maze is a vegetable garden. There are fifteen cabbages on the north side and fifteen onions on the south side. On both sides, you can find a scarecrow.

North of the vegetable garden and Melzar's Maze, you can find the famous Crafting Guild! To enter, you need level 40 Crafting and wear a brown apron. Inside you can find a ton of things to do, such as make pottery, mine gold, spin wool, and more!

Outside the Crafting Guild, you can find Assistant Brock. He is in charge of the Hot-Air Balloon in front of the guild. In order to use and see the balloon, you need to complete the Enlightened Journey Quest.

West of the Crafting Guild is a pen filled with cows. If you kill the cows and collect their hides, you can take them to the tanner upstairs in the guild. West of the cows you can find a peninsula with level 28 Hobgoblins and Snape Grass respawns. 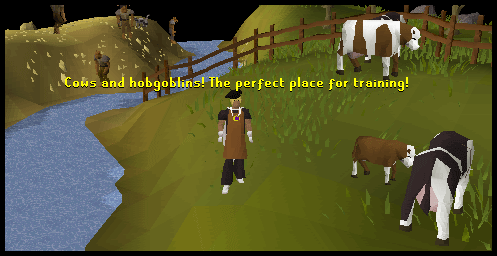 Southeast of the Crafting Guild is the Rimmington Mine. The mine includes several different kinds of ores, which are: five Copper rocks, two Tin, two Clay, two Gold, and six Iron. The mine area also plays a part in the Animal Magnetism Quest. 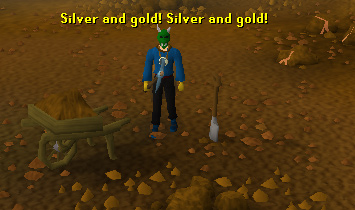 Northeast of the mine site, you can find a group of Wizards. Four of them are level 13 Elemental Wizards, one for each element. There is a chance of getting elemental runes when you kill one of the wizards. The last wizard is skilled in Necromancy. His name is Malignius Mortifer. Malignius is part of a few quests, such as Fairy Tale Part 1: Growing Pains and Swan Song. There are a lot of options you can choose when you talk with him. If you have completed Swan Song, you can ask for more bone seeds, another brown apron, or why the Skeletal Magi are still at the colony. You can also ask him who he is, what is he going here, where can you get clothes like his, and if he could teach you some magic. 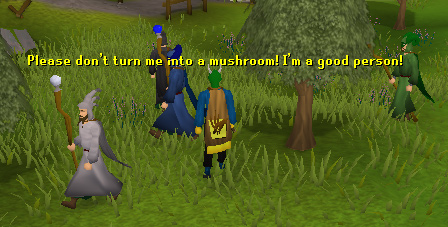