Speak to the Mysterious Ghost outside Glarial's Tomb.

Note: You can get a Ring of Visibility from Rasolo, north of Ardougne, and a Ghostspeak Amulet from Father Urhney in Lumbridge Swamp.

Make sure you are wearing your Ring of Visibility and your Amulet of Ghostspeak. You can't see the ghosts without the ring, and even if it is on, they do not appear on minimap.

Outside of Glarial's Tomb north of Ardougne, you will find a Mysterious Ghost. He is cursed, and will talk about Armadyl's Staff. After he has told you his story, you will receive a Ghostly Robe Top. He will ask you to find another ghost, the thief Rennard. 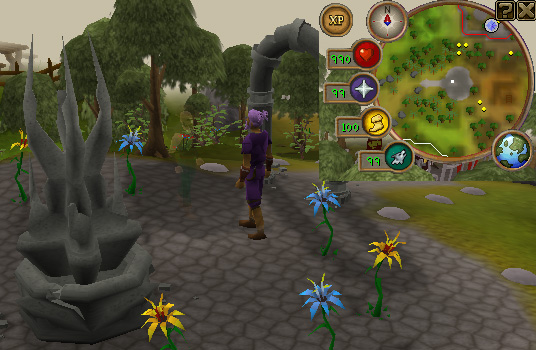 From now on, each ghost that you must talk to are in order, and the location of the ghosts is different for everyone. If you speak to the correct ghost at the wrong location (you are given a location), it will not work. 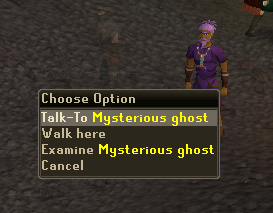 Rennard the Thief can be found in several locations, including:

Once you find him and speak to him, he will give you a pair of Ghostly Gloves. Then he will ask you to find Kharrim the Messenger. 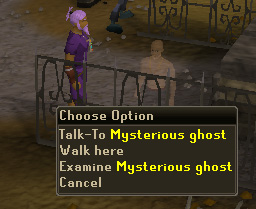 Kharrim the Messenger can be found in any of the following locations:

After speaking to him, he will give you a pair of Ghostly Boots and ask you to find Lenissa the Spy. 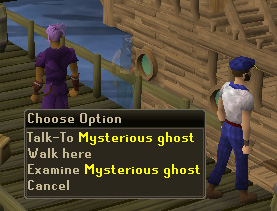 Lenissa the Spy can be found at the following places:

After speaking to her and listening to her story, you'll receive the Ghostly Robe Bottom. She will ask you to speak to her superior named Dhalak the Mage. 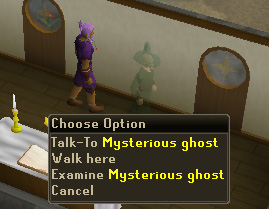 Dhalak the Mage can be found:

He will give you a Ghostly Hood and ask you to look for Viggora the Warrior. 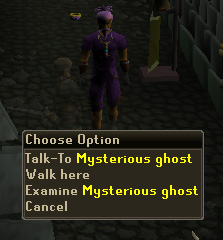 Viggora the Warrior can be found at the following locations:

After hearing his story, you'll receive a Ghostly Cloak from him! Congratulations, you've found all of the Ghost Robe pieces!

Once you have an entire set, you'll look like this: 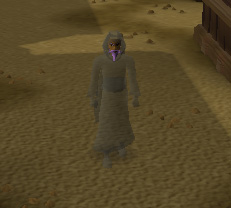 Yes, you're transparent and you can see right through yourself! The full set of robes provides 21 to your both your Magic Attack and Magic Defence bonuses. They give no other bonuses and are un-tradeable. 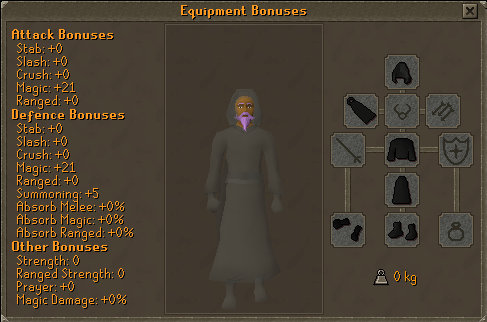