By: Sobend
Special Thanks to: Dimosthimise, Jna, M a ss a, Micael Fatia, Nathan ofc, Warlock

Speak to Thorvald the Warrior in Rellekka

To begin, speak with Thorvald the Warrior north of the Rellekka pub. He will tell you Koschei, the warrior fought during the Fremennik Trials, needs your help. Climb down the ladder and speak to Koschei the Deathless. He will talk of a tree that he cannot cut down and will ask you to use the Balmung (the weapon obtained during Blood Runs Deep) and give the lumberjacking a shot yourself. If you have lost your Balmung, you can get another at Chieftain Brundt in Relekka or Queen Sigrid in Etceteria. He will not be able to come with you as he has some trials business to clear up.

The tree in question is found just northwest of the bridge to Rellekka. It is called a "Blossoming Tree." Cut the tree with the Balmung in your possession and you will have success in cutting it down. In the trunk you will find a strange chest

in the center. Take this to Koschei, who will magically unlock the chest. Now open the chest and you will find a toy ship

(it appears Jagex is trying to appeal to a younger crowd). Speak to Koschei again and he will partially recover from his amnesia. He will tell you to inspect a well where he refills his water pouch. Find the well in southeast Rellekka and use the toy ship with the well. You will retrieve a white jewel

Head back to Koschei (in this quest you are not allowed to investigate things yourself) and he will be hypnotized by the jewel. He will ask you what you want to do with the jewel and you will be given at least one option. You can either cut the jewel, crush the jewel (90 Strength), or deflect curses (90 Prayer). Once you have done this, give it back to Koschei who will remember everything about his past, including his name "Jason Bourne". Actually nah, but we thought we'd throw that at you so you can prepare for this plot twist: Koschei is a Mahjarrat! After a brief dialogue, Enakhra and Akthanakos will appear in a cutscene where Koschei will refuse to align with Zamorak and Zaros. 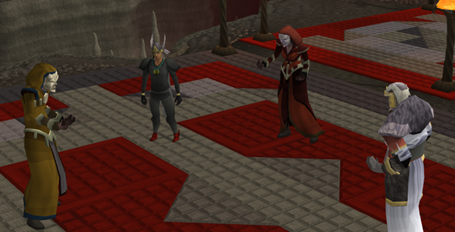 Following this, you will complete the miniquest.

An improved Balmung A 30,000 experience lamp in any skill over level 75

The improved Balmung will have the following stats.

If you have all of the requirements for "Mahjarrat Memories," you will begin the miniquest right after Koschei's Troubles.

If there is a polar bear in the Rellekka well while you place the toy ship in the well, the bear will tease you for playing with toy ships.