By: Renegaderp
Special Thanks to: Army of One, Fabio, M a ss a, Micael Fatia, Nathan, xSmiley 420

"Beneath us lie the God Wars Caverns. There, the generals of the gods continue the battle that was started thousands of years ago, oblivious to the passing of time."

Kree'arra is one of Armadyl's strongest warriors. At a combat level of 580, this large Aviansie is amongst the strongest monsters Gielinor has to offer. This monster is responsible for innumerable deaths, but if done properly; offers some of the best money making methods per hour, as well as over 250k Ranged and 120k Slayer experience per hour when on an Aviansies task. 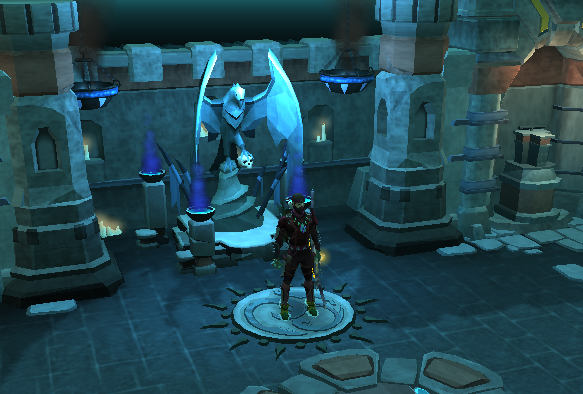 To solo Kree'arra, you will need a few stats:

Having a few unlocked things will greatly make your trips last longer and be more convenient:

Note: Note: The Bonecrusher and one of the 3 Dungeoneering Prayer necklaces (Twisted Skull, Split Dragontooth, or Demonhorn) work very well at Armadyl. After you kill Kree'arra and his minions, they will all drop bones. The Bonecrusher automatically buries these bones, but here's the catch- the Necklace you're wearing gives your prayer points for each bone you bury- 50 per regular bone, and 100 per Big bone. This means after killing Kree and his minions, you get 250 prayer points back!

Now as for gear:

Ranged is by far the most preferred attack style. Using at least tier 70 gear means the player will only take moderate amounts of damage at higher defence levels. However, Flight Kilisa, one of the minions in the room, uses melee and thus hits very accurately, albeit for small increments of damage. 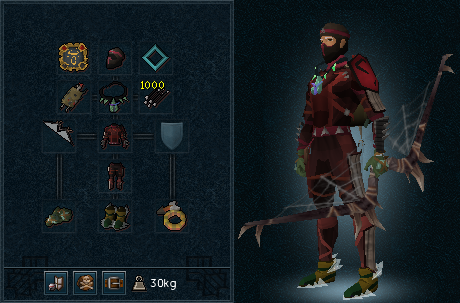 Armour: Anything above full Armadyl should suffice with 80+ defence and ranged. Karil's set is a cheaper alternative, but should you happen to die, you will lose a fair bit of cash repairing the pieces. Use a Full Slayer Helmet if you have an Aviansies task.

Cape: Ava's Alerter > Ava's Attractor > Ava's Accumulator
Note: Use a TokHaar-Kal-Xil if you use a Crystal Bow or a Zaryte Bow, as none of these weapons use actual ammunition, and Ava's devices lose their main purpose.

Aura: Penance > Vampyrism > Reverence (and its upgraded versions) > Sharpshooter
Players will often find themselves bringing multiple auras as trips can last very long at Kree'arra if the correct strategies are deployed.

Pocket slot: Shard of Zaros > Sign of Death > Sign of Life > Sign of Item Protection OR Scrimshaw of Cruelty > Scrimshaw of Ranging.
Note: Using a Pernix/Torva/Virtus item, or a Zaryte bow gives you protection against all factions of the God Wars Dungeon. Otherwise, bring a Shard of Zaros, or an Armadyl and Zamorak item.

Weapons: Atleast a Royal Crossbow is recommended (tier 80 and up).

Necklace: Demonhorn Necklace = Split Dragontooth Necklace = Twisted Bird Skull Necklace > Dragonrider Amulet
Note: Bringing expensive amulets such as the Amulet of Fury is not recommended, as it merely adds to the losses upon death. A Dragonrider Amulet (reward from the One of A Kind grandmaster quest) has comparable stats and can be reclaimed for 500,000 GP from Mr. Mordaut the Dragon, who resides under the stairs of Varrock Museum.

Ring: Ring of Wealth > Sixth Age Circuit > Archer's Ring > Ring of Life
Note: Again, try to minimize how much you stand to risk upon death; bringing expensive amulets, necklaces will only make you lament more when you die.

Familiar: Pack Yak > Unicorn Stallion > Pack Pig > War Tortoise with Bunyip
Note: If you choose to use a Unicorn, be watchful of your health; try to rely as much as possible on your familiar, and avoid using food unless your health drops below 3-4,000. Also, if you can't use a Pack Yak, bring an Explorer's Ring 4 or runes to cast the High Alchemy spell.
If you're looking for a few fast kills, bring a Steel Titan and a few hundred scrolls. 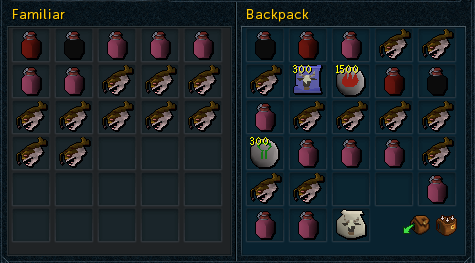 If you have 90+ range, 90+ defence, and 70+ gear, prioritize prayer over food. The minions will drop Manta Rays and Mushroom Potatoes periodically.

An example of a suitable action bar would be: Piercing Shot, Sacrifice, Dazing Shot/Needle Strike, Ricochet, Fragmentation Shot, Snap Shot, Rapid Fire, Bombardment, Death's Swiftness. Feel free to add food, potions, Debilitate, Guthix's Blessing, the Enhanced Excalibur, or anything you feel might help you. It's highly recommended to NOT use the Shadow Tendrils ability, as it may result in your death if timed incorrectly. Using the Ricochet and Bombardment abilities as often as possible results in higher chances of killing the Magic and Melee minion twice per kill. This leads to more profit per hour.

If your Prayer is under 92, you'd want to set your quick prayers to Prot. Item and Protect Range, as well as a Zealot boosted 'Overpowering Force'; if your prayer is between 92 and 95, you want to use Protect Item and Soul Split, and if it's above 95, you want Prot Item, Soul Split and Turmoil. 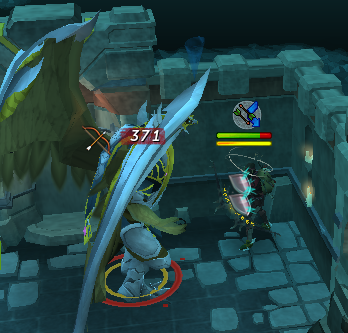 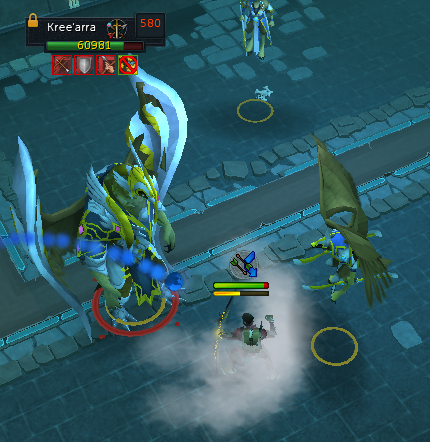 Kree'arra will always drop Big bones and a random amount of feathers. Uncommon drops include rune items such as crossbows, longswords, bolts, arrows, as well as Dwarf weed herbs and seeds. The majority of profit, however, comes from Kree'arra's unique drops. These include the Armadyl and Warpriest armour sets, 3 new abilities, as well as parts of the elusive Godsword- a weapon forged during the God Wars. Legend says its blade has the power to kill a God. 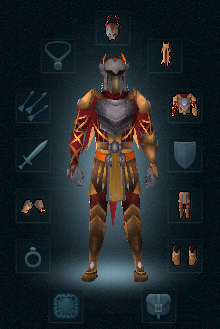 The Warpriest of Armadyl set has a special effect that will decrease the cooldown of your abilities by 15%, occurring more often if you wear more parts of the armour set. Warpriest is one of the few hybrid armour sets in the game, meaning that you can use any combat style while wearing it without suffering any accuracy penalties. This is very handy at certain bosses like the Dagannoth Kings. Warpriest is dropped randomly, and can even be dropped by the Aviansies and other minions you must kill while getting your killcount; however the drop rate is much higher if you have participated in the 2nd World Event, where Armadyl, God of Justice, defeated Bandos, the God of War by crushing his head with his own mace.

Kree'arra drops 3 abilities. These will not appear as drops, but instead you will get a message in your chatbox saying "You have learnt the _____ ability!" Like the Warpriest armour set, the abilities are learnt randomly, but the drop rate is higher for people who participated in the 2nd World Event.

Transfigure: An ultimate ability which binds the player for 6 seconds, and the player heals 250% of any damage taken during the stun. This is considered by many to be dead content, although it might be helpful depending on the situation.

Sacrifice: Sacrifice is a basic ability that heals 25% of the damage the player deals with it, or 100% if the attack kills the target. This is very handy when used in conjunction with Berserk on a slayer task- it's easily possible to heal over 3,000 life points with the right setup.

Devotion: Arguably the most useful one of all 3, this threshold ability causes Protection Prayers and Deflect Curses to completely block all incoming damage to you for 10 seconds. In PvP, the ability blocks 75% of all damage. This could easily make the difference between life and death in several places.

Kree'arra also drops parts of the Godsword. His minions drop Godsword shards (3 in total form a Godsword blade.) and he drops the much more coveted Armadyl hilt. Attach it to a god sword blade and you'll get an Armadyl Godsword!

The Armadyl armour set is a Tier 70 range power gear. If you wield the whole set, you deal extra damage equal to 10% of a level 70 weapon. Drops include the Armadyl Chestplate, Chainskirt, Helmet, gloves, boots and buckler.

Note: A lot of people get very, very annoyed upon getting an Armadyl buckler drop. Speaking as a PvMer who's had long streaks of bad luck, every drop is precious, and shouldn't be so callously disregarded. Instead of ranting about getting a useless drop, it's better to quietly acknowledge that you could have gotten mind runes instead of a buckler. Better luck next time! Frankly, the world has bigger problems, with Sliske starting an all-out war between the Gods, and Dragonkin threatening to destroy whatever survives their battles.