Sobend has taken a break to carry out clandestine activities, so this edition of the Santafish Monthly won't have a proper introduction or a clever title, and Shooter585 wrote half of it.

A number of fairly inactive members graced us with our presence this month to remind us that they're inactive. Conspicuous posted a blog entry announcing his sanity, presumably in celebration of MLK weekend. Admiral did the same, spurring an intense fusillade of waves. Emergences from slight inactivity also came from Fake; Dimosthimise, who lasted an admirable few months away from the clan; and Jna.

The Spontaneous Escapades of Sir Jakavam

A new blog opened this month that already contains a multitude of entries concerning "Random Adventures." Take a look at Jakavam's RuneScape experience for fun.

Zooey Gets Hit by a Train

No one was surprised.

On January eighth, a new boss called Zulrah was released in Old School RuneScape. Zulrah is a level 725 solo snake boss located in the Poison Wastes south of Isafdar. It brings into the game many new mechanics, such as the ability to summon minions and poisonous clouds and to infect players with venom. Venom is similar to poison, but instead of the damage decreasing over time, it increases over time--2 damage every time a hitsplat appears, capping at 20. Drinking antidote++ will convert venom into regular poison, and drinking another dose will eliminate it. However, to obtain immunity, one must drink an anti-venom potion, which can be made with Zulrah's scales, something Zulrah drops 100% of the time. 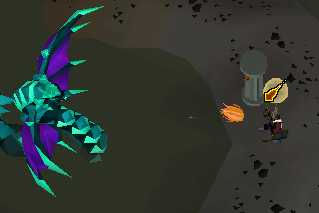 Zulrah has several new rewards, one for each combat style. The boss drops a tanzanite fang which can be converted into a venomous blowpipe which uses darts as ammunition. He also drops a magic fang which can be attached to either a Staff of the Dead or Trident of the Seas. This enhances the magic attack rating of each staff and is also capable of infecting opponents with venom. Warriors can wear the serpentine helm, which acts as an anti-poison totem, has a chance of infecting opponents with venom, and also has a +5 strength bonus. All of these items are degradeable and are repaired with Zulrah's scales.

Zulrah and its rewards were initially met with criticism, so several changes were made. The attack speed of the toxic blowpipe was reduced in PvP combat by 1 tick, though it remains as fast as darts in other situations. Zulrah was also buffed to encourage players to use multiple attack styles instead of just range.

This month Jagex introduced a new way for RuneScape game developers to interact with players: Rune Labs. The premise of Rune Labs is that players create suggestions which are posted on the Rune Labs part of the site. These suggestions can be about almost anything, with a couple of obvious exceptions such as the removal of the Evolution of Combat. The most popular suggestions are brought to Jagex's attention and Jagex decides whether or not to develop the idea into a game update. There is a character limit for each idea, but players can post a link to the official forums if they would like to develop their idea more there. So far, updates from small "ninja" fixes all the way to large projects have been proposed.

January 26th saw the latest Player-Owned Ports expansion. Three new adventurers were released: the Tengu, the Memory, and the Exile. Hiring them requires level 90 in Agility, Divination, and Dungeoneering respectively. In addition, several exciting new rewards were added. Two new scrimshaws, the whopper-baiting scrimshaw and the casket-salvaging scrimshaw, have fishermen everywhere reeling with excitement. To match the previously released death lotus darts, tier 85 melee and magic weapons can now be obtained. For those who believe in magic, the seasinger kiba and makigai might be of interest to you. If you would rather just bash things up close, try out the tetsu katana and wakizashi. If you would like to have some fun but do not have the required levels to use these weapons, like the writers of the Santafish Monthly, try saying them out loud.

In mid-January, a poll was run on Old School RuneScape to determine whether the Grand Exchange was popular enough to be implemented in "07." Like all other updates, 75% percent of voters had to approve of the update for it to be implemented. An automatic trading poll had been run in the past, but failed. After one day of voting, it was not obvious whether there would be a different result this time around. About 73% of the players voted yes, just short of the 75% mark. However, a slow surge towards yes followed, and eventually 76% of players approved the update. Over 73,000 players voted.

Several tweaks have been made to the Grand Exchange, but it is unlikely that anything major will change because 75% approval for changes must be made. Although the the update just passed, the GE's coming is already being noticed. Just ask Lucien. 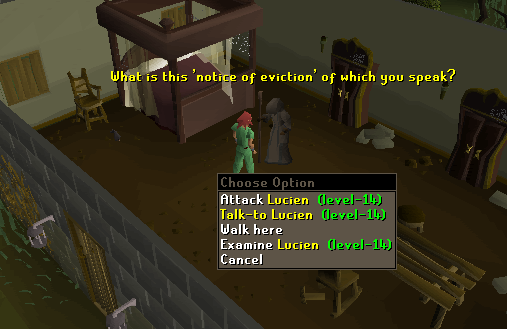 Most dangerous job in the world?

On January 25th, Jagex announced they would be willing to release permanent free-to-play like it was in 2007 if membership bonds were released alongside it. The bonds would work similar to the ones in RuneScape 3. Jagex's previous attempts to add bonds into Old School RuneScape failed, but permanent free-to-play is arguably the most demanded update on "07," encouraging many players to change their stance on bonds. Supporters of the change note that it is already possible to use bonds in the game by swapping coins to RuneScape 3 and back, while opponents say microtransactions are definitely not old school. The issue is currently being polled with an 85% approval rate, so expect to see permanent free-to-play released on February 19th, Old School RuneScape's second birthday.

Why Old School RuneScape isn't for Me

(The following is a Sobend production and does not represent the collective opinions of the Santafish Monthly.)

Like many other people, when 2007scape was released, I got pretty excited. Even looking past nostalgia, there are personally plenty of things to like about it. The combat system, profitable skilling, no microtransactions, and also the not completely DIY atmosphere RSC has yet not the "easyscape" feel RuneScape 3 has. Now, almost two years later, I can definitely say that I'm not interested in trying to pick up Old School RuneScape.

Why? I feel the game is quickly turning into RuneScape 3 without the combat system and microtransactions. You may be thinking "Well what's the difference between RuneScape 3 and Old School without microtransactions and EOC?" The answer is a lot of little things which rapidly add up. Skilling drops (mentioned later), 6 hour AFKing, etc. It all adds up. Another thing I dislike is the community's insistence of adding post-2007 content to the game. Seeing certain things like the Corporeal Beast (with no back story) and even the God Wars Dungeon in Old School RuneScape doesn't feel right. I would prefer if the game took a different direction; this would show more creative ability and fewer aspects of the RuneScape 3 game everyone apparently hates.

Another thing that I've disliked from the beginning are the updates Old School RuneScape is getting. No, I am not against updates, nor do I think the quality is bad. It's the type of updates that Old School is getting that is making the game feel like a private server. In 2007 (or 2001-present), RuneScape received a variety of different updates ranging from skilling updates, quests, miniquests, etc. Now, the updates that bring in brand new content usually fall into two categories: NEW BOSS or YET ANOTHER REASON TO TRAIN SLAYER, with a possible PvP category as well. Despite being two years old, not one quest or significant skilling update has been released. I would like to see more variety in updates. I realize that many players have more interest in bossing and slayer than anything else. In fact, for the purpose of argument, let's say that we're only interested in satisfying them. Why should we add more variety? It's because we need to slow down the power creep. Every time a new boss is added, so is a new powerful item. Weapons are getting too powerful, as seen with the release of the toxic blowpipe (which has been nerfed, thankfully). The power creep hurt PvP and even PvM even in pre-EOC RuneScape. Jagex needs to realize this and stop. How do they stop? Stop adding as many bosses by adding variety to updates. I'm not sure if they have the same opinion, as rumors of a Hellhound boss are beginning to circulate. By the way, this is all coming from someone who likes PvP and PvM.

A major, under-the-radar issue I am beginning to dislike in Old School RuneScape is how monsters are now dropping skilling materials. This killed skilling in RuneScape 3. If Old School RuneScape is going to continue they will follow a similar path and skilling will suffer a familiar fate. Again, this ties in with the release of new PvM monsters. The new snake boss, Zulrah, drops a large amount of skilling items. Certain items are already beginning to fall in price. This is going to hit skillers hard. If you look at RuneScape 3 right now, you can easily see why. Even the best, high levels skilling methods pale in comparison with medium level PvM. Jagex needs to limit skilling drops on monsters.

I have a few other beefs with Old School RuneScape, such as the streamer culture, but those are minor when compared to the things I have described above. Thanks for reading.

Why would you want herbs to be listed as grimy instead of unidentified? To identify an herb you actually need some experience as a botanist. To make a grimy herb clean, all you need is a sink. Hell, you could probably just spit on it if you were in a pinch. Why do they need to be listed on the Grand Exchange anyway? Is someone going to go out of their way to buy grimy herbs so they can spend their day cleaning them for a meager amount of experience?

He eats too much. Stupid rat. 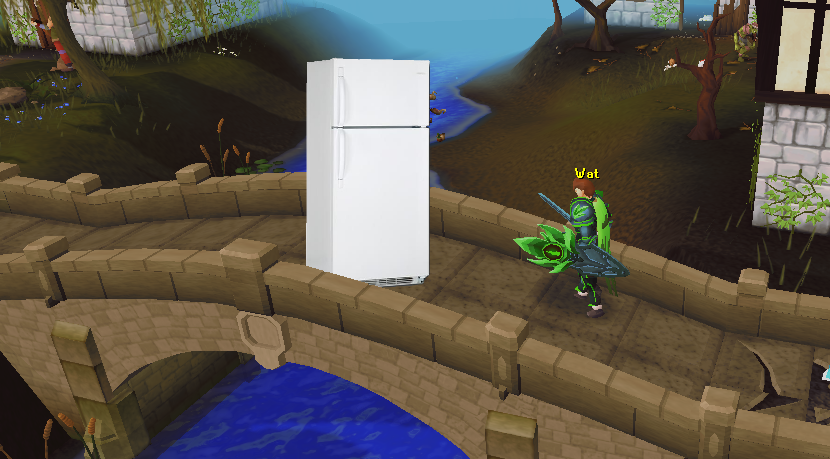