Call of the Ancestors

In the first installment of what Jagex labels "bottle quests" - stories that don't require too much development time - comes this quest that centers on three Goebies. Goebies as a race are a bit difficult to describe; fortunately the quest is more straightforward. To prevent an enemy race called the Airut from destroying Goebie villages, you must mentor three young Goebies on how to be a hero. The quest features the taking control of a character mechanic; your character actually does very little. The novice-level quest demands novice-level expectations, but some will find the dialogue amusing.

For a reason convenient to the developers of RuneScape, the demigoddess Amascut has gone especially mad this Halloween and is reigning terror on the inhabitants of the underworld. As if being dead weren't bad enough, the deceased must now fight for the safety of their souls. Players can team up with Icthlarin to escort the souls out of harm's way and band against Amascut. The event can be played by speaking to Death in Burthorpe.

Although the atmosphere the event has is commendable, the gameplay has been heavily criticized. The event, like many others recently, has been seen as grindy as opposed to the miniquest-esque events of past. The rewards are also meager.

The long-planned open PvP gamemode in Old School RuneScape was slightly beaten by RuneScape 3's DarkScape, but Deadman Mode is different enough to worth noting. Some things are more convenient - there is one global bank in Deadman instead of three banks for each danger area in DarkScape. On the other hand, there are many things which are inconvenient. Most notably, death. Upon death, the 28 most valuable stacks in your bank are lost. Also, all but a few selected skills lose half of their experience. Your bank is looted by your assassin and the experience disappears into an apparent bout of amnesia. If DarkScape is somehow not intense enough for you, check out Deadman Mode.

For the first time in nine years, Falador gets a graphical update. The walls become less uniform, the paths get a little beaten, and the NPCs get refurbished (tough luck to the Falador guard traditionalists). The update comes with a local event which featured the Kinshra, AKA the Black Knights, invading Falador.

On Sunday, November 1st, there was a game/race played in the MLB, NFL, NHL, NBA, EPL, MLS, and NASCAR. This is fairly rare. We hope you enjoyed it.

November 3rd marks the 10th anniversary of "The Big Move," the change from the old forums to the new (and current) forums. It was a fairly important event, so let's get into it.

The so-called Old Forums were the hub for the first year of the existence of Sal's Realm Forums. The forums were hosted by InvisionFree and meant to house the small pre-forum community Sal's Realm had. Structurally speaking, the forums had an extensive RuneScape discussion section and market section, with a site feedback section and a relatively small off-topic section.

The forum moderation was set up differently from what it is like now. There were forum moderators that were designated to moderate a certain section (such as the marketplace) and global moderators which moderated the entire forum. That system would also temporarily transfer itself onto the new forums, where it would eventually end in some controversy. Rankings were set up similarly, but there was a rank called "RS Retired" which members who stopped playing RuneScape could request.

Despite the minor differences, the forums were not too different from what they are now.

As you would expect with a small community, the forum was not too active at first. However, as time went by and the summer of 2005 arrived, the forum was becoming more and more active with 60-70 users on at peak times. In interest of keeping up the forum's expanding growth, Salmoneus looked to move the forum off InvisionFree and onto a private server. In October the new and improved forums were created, with Salmoneus setting up the sections and moderator accounts.

On October 30th, Salmoneus announced the move to the community, labeling it "The Big Move." Salmoneus said the move was necessary to keep the forum growing and that the new forums should last for another "10 years." User reaction was at worst indifferent with most being happy that the community was growing so large. On November 3rd 5 PM EST, the forums were opened to new user registration and everyone rushed to try get a low member number (member numbers were more displayed before the 2012 forum updates). Users were pleased with their numbers except for the user "Kikko," who was (understandably) upset at getting member number 69. There was some concern that certain members would steal the names of other users during registration, but this was kept at a minimum with threats of a permanent ban.

Previously banned members were usually given a second chance on the new forums. Many of them were eventually banned again anyway.

The new forums have remained the primary mode of communication among the Sal's Realm community since The Big Move. There have been several updates, but the forum has been the same. As for the old forums, they remained open to posting for about a week after the move, at which time they were closed. The old forums remained viewable for archival purposes to serve anyone looking for a dose of nostalgia.

In April 2012, the old forums mysteriously vanished. Users have speculated that the forum was a victim of the Indonesian cybermonster Iktikanimudia. It's also possible that they were deleted by InvisionFree to stop a hacker from gaining access to forum member information. We'll never know for sure.

Halloween is over. You know what that means? Time to get in the Christmas spirit! Grab your decorations and prepare yourself for two months of repetitive corporate advertising! 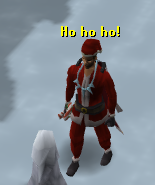 Runefest took place on October 3rd. During it, several updates were revealed for 2016 release. The first and most anticipated is the new skill Invention, which is expected to be released in January. Invention will be an "elite" skill; you will need 80 smithing and crafting before you can even train it. Invention is expected to add specialized weapons into the game. Various quests are slotted for 2016. It is expected that Sliske's tournament will wrap up at the end of 2016 with three quests and a finale. A sequel to Fate of the Gods, featuring a Zamorak versus Zaros confrontation, is expected. The Myreque questline is to be finished up as well. Most interestingly, the Gower Brothers are expected to come back to create a quest for RuneScape's 15th birthday. Other updates you can plan on seeing include new areas, new bosses, and possibly an NXT client.

Jagex also announced that RuneScape Classic will be reopened in 2016 for RuneScape's 15th birthday.

Check out Supersal69's topic where she has posted pictures she took from Runefest.

A Question for Pros

Does anyone know how
I can write a good haiku
To impress the girls?

What do the Pope, a blonde, and George Bush have in common?
This isn't actually a joke lured for 2 seconds of your life gf.

So I mean listen I got this neat idea hey, you listening? Hey? You listening...?