Hidden away from the fearsome trolls and the roaming Fremennik, the dwarves delve deep beneath the mountains in search for the ore they need to support their home of Keldagrim. One dwarf, in particular, has for years been trying to crack open a rock that seems to be impervious to any material that he's tried on it.

Convinced that solving the riddle of the rock will lead him to unimaginable wealth, he has spent the latter part of his life on just this lump of stone. Help him out, but take care you don't end up in a tight spot!

Begin by talking to Dondakan the Dwarf in the Keldagrim Mines.

First off, make your way to the Keldagrim Mines located northeast of the mining site found east of Rellekka and go inside. Go through the small Cave Entrance on the east wall, and then speak to the Dwarven Ferryman. Ask him for a (free) ride to get across the river. Cross the bridge to the east and head to the room in the northwest corner of the cave.

Now talk to Dondakan the Dwarf, and ask him why he's firing cannonballs against the wall. He says that the rock is impenetrable, so tell him that you'll try and help him. He wants you to get information about the rock. 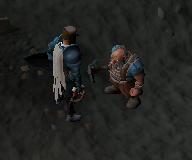 After speaking to Donadakan, speak to the Dwarven Boatman and take the boat to Keldagrim. Head north, and then cross over the river to the west. Go south to the Library on the east side of the road just northeast of the bank. Speak to the Librarian who sends you to find Wemund's Wrench Warehouse in the western half of the Palace. Look for an Anvil symbol, and inside will be the allusive Dwarven Engineer.

Talk to the him and he says that you should talk to Rolad, a renowned scholar. Now leave Keldagrim and the cave.

Rolad can be found in a small house near the entrance to the Dwarven Mines, southwest of the Monk's Monastery. He tells you that he has a book that may be able to help, but it seems to be missing some pages, which can be found in the mine.

Page 1: Kill a Scorpion for this page. You may need to kill more than 1.
Page 2: Search the Mine Carts until you find this page.
Page 3: Mine from the rocks until you obtain this page.

After you have the 3 pages, bring them to Rolad who will give you a book on Dwarven Lore. Read this book and then talk to him again, who will allow you to keep the book for awhile. While you're in the area, buy an Ammo Mould from Nulodion for 5gp in the other nearby house (if you don't already have one).

A Golden... Cannonball of Hope?

Now go back to Dondakan and ask him what he's tried on the rock so far. He says that he's tried everything from having 100 dwarves mining at it, to firing a Rune Cannonball at it. Make a Gold Cannonball by using a Gold Bar with a Furnace, while carrying an Ammo mould (gives 37 Smithing xp). Use this with Dondakan and tell him that you're sure that it will work, which it should.

Now that your idea has worked, he now wants you to make a Gold Helmet. A Gold Helmet can be Smithed by using 3 Gold Bars on an Anvil. Dondakan also needs some schematics so that he can modify his cannon to fire you through the wall. He gives you a set of Base Schematics, but you also need 3 others.

Now that you have all 3 sets, you need to Assemble them. Choose the 'Assemble' option on the Base Schematics, and a screen will appear. Begin by unchecking all of the other schematics from the list in the bottom right corner, except for the one you wish to work on to make it easier.

Schematic 1: Use the arrows to make the person's body line up with the shape in the Base Set. Click here to see how it should look.

Schematic 2: Uncheck Schematic 1 and check off Schematic 2. Align the shapes at the top of the diagram with the ones on the base. You may need to rotate this one to complete it. Click here to see how it should look.

Schematic 3: Uncheck Schematic 2 and check off Schematic 3. Just match the legs of the person up with the ones on the Base Set and you should receive a message saying that they are complete.

Once you have completed the schematics and have a solid gold Helmet, head back to Dondakan. You should bring some food, as well as prayer potions and magic resistant armor. Dondakan will fire you from the cannon and you'll appear inside of the rock. 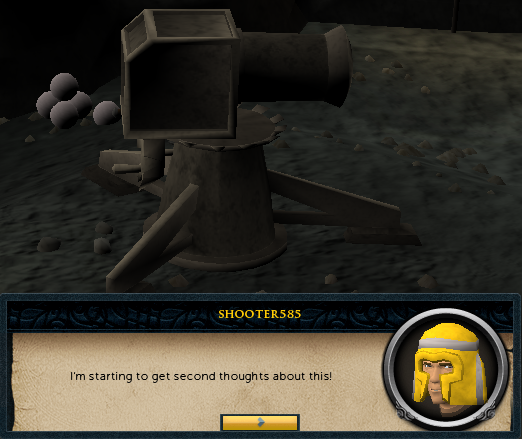 Once inside, you will only have 8 minutes to complete what you need to do, and after that you will remove your helmet and be teleported out of the rock. Mine at least 5 Gold Ore; the more you keep in your inventory, the weaker the demon you must fight later will be.

Mining fewer than 5 ores will result in the demon being invulnerable to your attacks!

You will be attacked by an Arzinian Avatar, and depending on your highest combat skill, you'll be attacked with your Combat Triangle opposite (warriors fight mages, mages fight rangers, rangers fight warriors). This demon ranges from level 75 to 125, depending on your level and the number of ores you mine (the more you mine, the weaker it is). 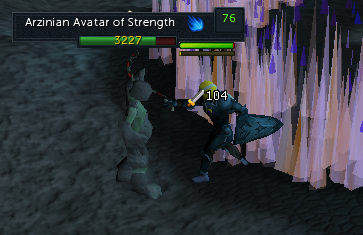 Defeat it, and you should be teleported just outside of the rock. Dondakan will thank you and give you your reward. Quest complete! 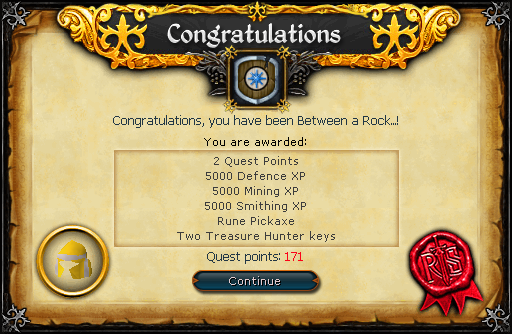 Rune Pickaxe The ability to use the gold mine, just bring your helmet so that you can enter. To leave you just remove the helmet. The Dwarven boatman to the east will bank your ores for you, but he charges 1 Gold ore per shipment and 1 ore for every 5 he takes back. 5,000 Defence experience 5,000 Mining experience 5,000 Smithing experience