Talk to Elena in the house just east of her parents' house in East Ardougne.

Firstly, speak to Elena in the house a small distance east of Edmond and Alrena's

house. She says that the Mourners have taken her Distillator used for testing Plague samples. Tell her that you'll try and get it back, and she mentions talking to Jerico about getting over the wall.

Head southeast, past the castle and over the bridge, and then north along the road until you reach Jerico's house just south of the bank. Talk to him, and he tells you to ask to Omart about getting over the wall. Before you leave, search the cupboard for some Bird Feed

and take a Pigeon Cage

from behind the house. Now head back towards the castle, and then southwest to find Omart near the end of the wall.

Omart says that you need to find something to distract the guards, and these pigeons may do the trick. Head north to the Watchtower, and stand in the corner where the two spiked fences meet. Investigate the Watchtower Fence, and then use the Bird Feed on the fence to cover the Watchtower.  Now open the Pigeon Cage to let them out, distracting the guards. Now go back to Omart who signals to Kilron in West Ardougne to throw a rope ladder over the wall, allowing you to cross into the city.

Head north to the Rehnison's house (from the Plague City Quest) in the northeast corner of the city. Pick up the Rotten Apple

on the ground and climb over the fence to the east. Use the apple with the Cauldron, and then try to enter the building. The mourner tells you that they are all sick from food poisoning, and he refuses to let you in.

Head southwest towards the Graveyard and find Nurse Sarah's house, which is located southwest of the building containing an altar. Search the Box against the wall inside the house to find a Doctor's Gown and put it on. Now head northeast, back to the Mourner's Quarters, and then try to enter the building again.

This time, since you're dressed as a doctor he will allow you to enter. Go up the stairs in the room to the west, and then kill one of the Mourners for a key. Use the key with the gate, and search the boxes on the north side of the room to find Elena's Distillator. Go back to Kilron and tell him that you're ready to leave, and then visit Elena.

Elena will test the plague sample that she took, but she needs you to bring the sample, along with some Liquid Honey, Ethanea, and Sulphuric Broline to

Guidor in Varrock. You also need to get some Touch Paper from the Chemist in Rimmington. It's very important that you not get into any battles, or teleport with the items in your inventory, or they'll be destroyed. Instead, put them in the bank and teleport.

First, you should visit the Chemist just west of Rimmington, but don't forget the chemicals or the Plague Sample! Tell him that you're Elena's friend and that you just need some touch paper for Guidor. Otherwise, he'll take the sample from you! He tells you to give a chemical to each of his boys, and he gives you some Touch Paper. You'll need to give the chemicals to the correct person:

Chancy gets the Liquid Honey.
Da Vinci gets the Ethanea.
Hops gets the Sulphuric Broline.

Now, with your Priest Gown top and bottom, head to the southeast corner of the city and try to open the gate, and you should be stopped by a guard. He'll let you through, so visit the Flying Donkey Inn and speak to each of the Boys to get your chemicals back.

Put on your Priest Gown and visit Guidor in the house just southeast of the inn. Ask for his help, and then tell him you were sent by Elena. He tests the sample and he concludes that there really isn't a plague. Go back to Elena in Ardougne who tells you to talk to King Lathas, upstairs in the castle just south of Elena's house. He says that it's true, but your quest is finished! 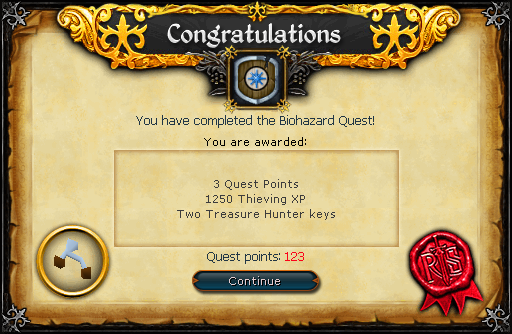 Ability to use the King's Training Ground, found northwest of Ardougne. 1,250 Thieving Experience