Speak to Baba Yaga in her walking house on Lunar Isle. 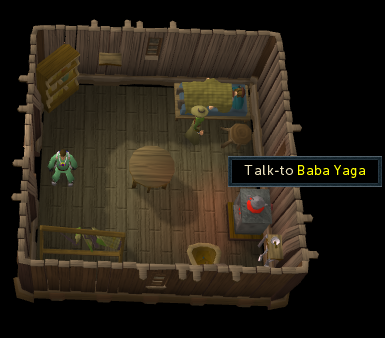 Start off by going to speak to Baba Yaga in her walking house on Lunar Isle. Talk to her about the man in the bed. She will tell you that he washed up on the shores and she wants you to help him by going into the dream world with her. Before you go into the dream world, it would be a good idea to grab some combat gear as you will be doing some fighting. Multi-attack spells here will be useful but not necessary. 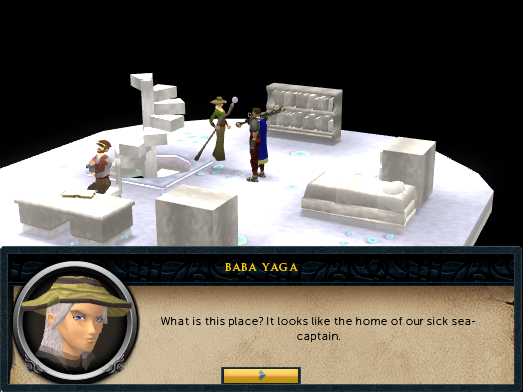 When she takes you into the dream world you'll be taken to a lighthouse with a man named Silas, the missing lighthouse keeper. Search the bookcase and you'll find a Prophecy Tablet. The inscription on it reads "When the tide is strongest, good intent will be needed once more". Talk to Baba Yaga after finding the tablet and she'll tell you to check the next room upstairs. 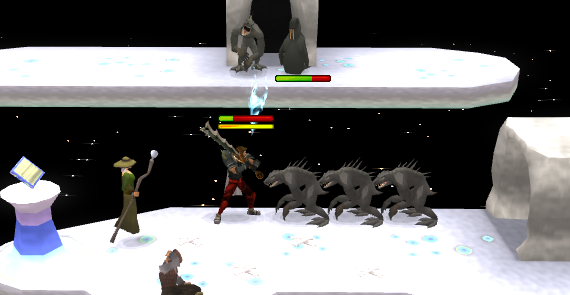 Go through the tunnel and talk to Silas. When you try to use the lectern it won't work. Baba Yaga will try to fix it, but while she tries to you will be attacked by Dagannoths. Get all of the Dagannoths lined up so only one can attack you. A Dagannoth and Wallasalki will appear and will range and mage you. After a while Baba Yaga will finally fix the lectern and you'll be taken back to her house. Talk to Baba Yaga and the Oneiromancer will come in and talk to Baba Yaga. She says that Dagannoths are attacking Rellekka and you're going to have to help fight the Dagannoths off. Go to the bank to get some fighting supplies, you'll have to fight some Dagannoths. When you are ready to go to Rellekka, Baba Yaga will ask to see your Seal of Passage, then she will kick you out of Lunar Isle and you'll be at Rellekka. 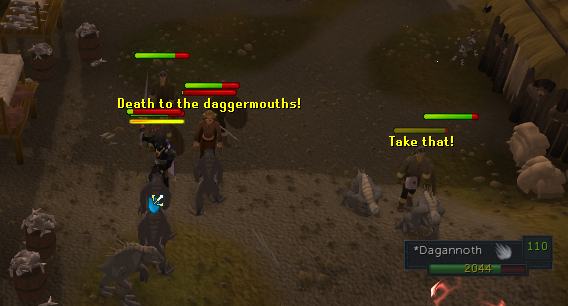 Once you kill enough Dagannoths, Chief Brundt will tell you to meet him on his boat.

Get on Chief Brundt's boat and talk to Queen Sigrid. She will tell you King Vargas went missing while searching for treasure under Waterbirth Island. Tell her you'll go find him, and she'll give you the Balmung, a weapon that is good for dealing with Dagannoths.

Talk to Chief Brundt now and he will take you back to Rellekka so that you may restock on food or anything you may need. Be sure to ask for a new Seal of Passage, since Baba Yaga took yours. 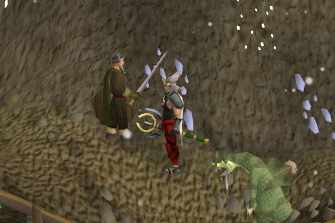 Now go to Waterbirth Island. When you try to go into the cave you will be stopped by Bardur. He will tell you he's been hearing strange voices coming from the caves, and he's noticed a new hole that he hasn't seen before. He will give you a rope in case you want to check it out. 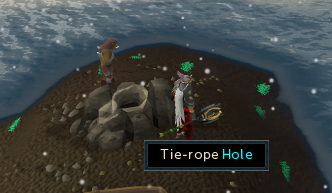 Head Southwest to the hole and tie your rope to it so that you can climb down it. Down here you'll find King Vargas. You'll need to escort him to the lighthouse basement for safety. 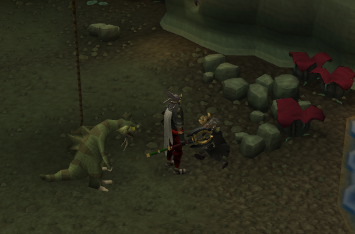 The path you must escort Vargas on is multicombat, and is crawling with not only Dagannoth, but Rock Lobsters and Wallasalki also; at one point, you're attacked by all three monsters at once. Most players will NOT make it through unless they have defence against all three attack styles. It's best to use Protect from Melee to defend against the Rock Lobster and wear Dragonhide to protect against the Wallasalki's Magic attacks.

At the end of the second room, after getting through the area where you're simultaneously attacked by Wallasalki, Rock Lobster, and Dagannoth, King Vargas will make a comment to the effect of "Oh no, here come more of them." At this point, he will be attacked by a number of Dagannoth. At the same time, his health will be depleted by the attacks, and if he gets red-barred you'll get a message that the Dagannoth have overcome & recaptured him, and you'll have to start over. 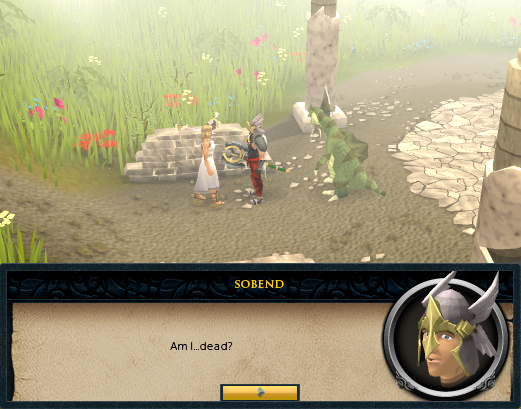 Once you've made it to the ladder that leads you to the basement of the lighthouse, some rocks will fall on you while Vargas is trying to go up the ladder. You wake up in the Grand Hall. Talk to Eir, and you'll find out that you're dead, but it's not your time yet. So talk to her when you're ready to leave. Now you'll be back on Brundt's boat. Talk to King Vargas and he'll thank you for saving him, and then he'll give you a Prophecy Tablet. Its inscription reads "All consuming darkness will rise from the sea, unleashed by good intent." 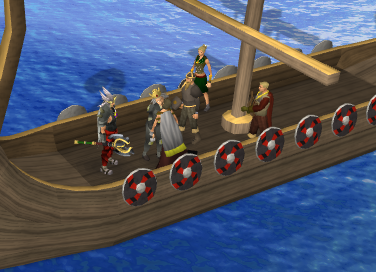 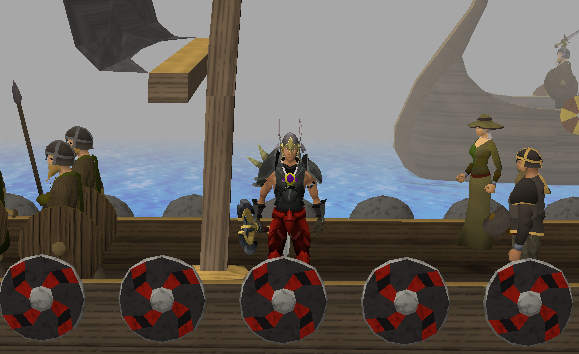 Be sure to stock up on food, Prayer potions, and have good gear ready. You'll want a ranged weapon, runes for combat spells, and the Balmung to use as a melee weapon. After that, talk to Brundt to head out for the final battle. Go down the hole, and into the tunnel to the South. Koschei the Deathless will stay behind to stop any Dagannoths from entering. When you try to go through the next tunnel Koschei will come, saying the Dagannoth Kings have come. The rest will go back with him to defeat them. Go through the tunnel to fight the Dagannoth Sentinels now. 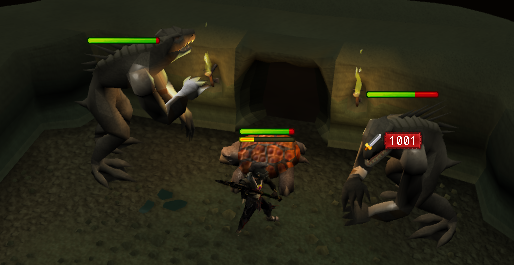 They will use range, mage, and melee attacks, but they will mostly be using melee and range. The Sentinels will heal each other if you just focus on attacking one, so you need to attack one for a little while, then start attacking the other until they both die. It is also useful if you bring a familiar with a good attack rate to attack one of the Sentinels. 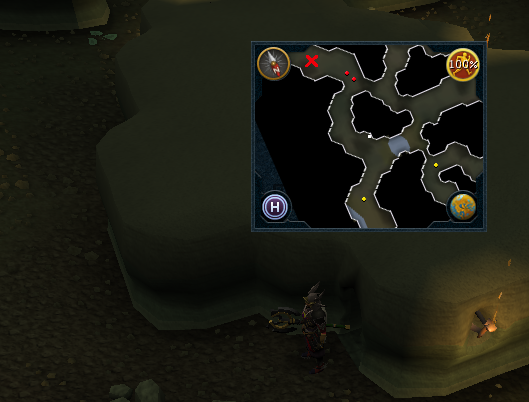 Once you've killed them go restock on any supplies if you need to, then go into the next section of the cave and head south until you see a tunnel entrance. Go through it and then go South into the next part of the cave. Here you will find the Dagannoth Mother. Be prepared! This battle can take a long time. If you want to, bring a Beast of Burden familiar, so you may have extra food and potions. 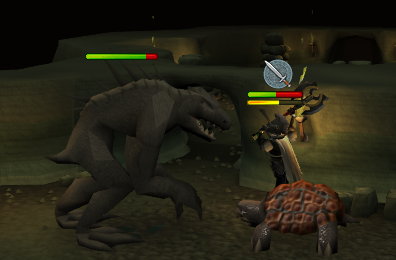 For this fight, you will need to use Magic attacks, Range attacks, and Melee attacks. If you miss one, then she will keep returning to it, so you barely do any damage. If you miss two, she will alternate between them, so that you can't do any damage at all. As soon as the fight starts, step away from her. That way you mostly only have to watch her Magic and Range attacks, which can hit hard, but not as hard as hard as her Melee attacks, which can fairly hard.

To start, she is invulnerable to any attack except with the Balmung. After hitting her with the Balmung a few times she will start changing colors like the Mother from Horror From the Deep. She will switch attack styles every once in a while, from a regular melee attack, to Water Wave, to shooting spines from her back. It's very important to Prayer switch accordingly, and have good food. Hybrid armor can also help switching styles.

You will need to switch your attacks depending on what color she changes to, the same as the Dagannoth Mother in Horror From The Deep. For Ranging the Dagannoth Mother, it is suggested to use the Crystal Bow. When you use your Magic attacks, it is better to manually cast your spells versus auto-casting, as there is a noticeable lag when you switch from one spell to the other spell attack. When you leave it on auto-cast, you will still cast one more of the previously chosen auto-cast spells prior to switching spells. It DOES make a big difference, as she seems much more vulnerable to the first new attack of each type, plus you will save on runes. 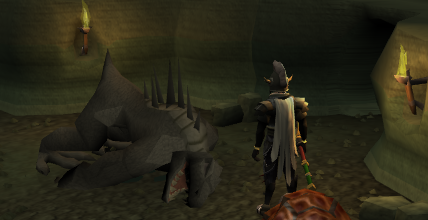 Once you defeat her, run through the tunnel, pick up the pickaxe, plank, and tinderbox, and collapse the wall. Doing so will also cause you to die, unfortunately. Talk to Eir to have her take you back. You'll find yourself back at the beginning of the cave. Check Prince Brand's and Princess Astrid's bodies; it turns out they died while fighting the Dagannoth Kings. Climb up the rope, and you'll be back on Chief Brundt's boat. You tell him that Prince Brand and Princess Astrid did not make it. Afterward, you will see a cut-scene of their funeral. 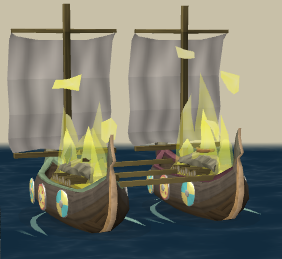 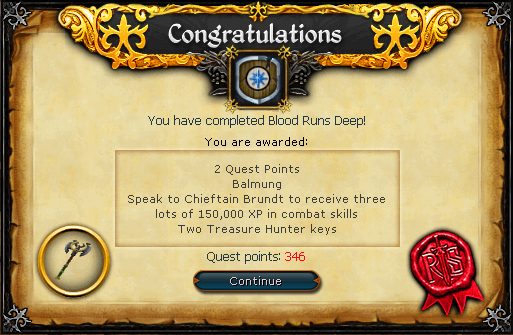 Balmung Speak to Chief Brundt to receive three lots of 150,000 XP in Ranged, Attack, Strength, Constitution, Defence, Magic or Prayer as long as they are above level 75 Two Treasure Hunter keys

The Balmung is a two-handed axe that is good against Dagannoths.