By: Sobend
Special Thanks to: Guitarguy

The Mahjarrat race is dying and they need your help! Can you save them?

Kharshai's in a sticky situation as the quest begins, but that's only the tip of the iceberg. The Mahjarrat are dying...and there's no way they're going quietly. Join the great and the mighty on an epic jaunt across worlds, relive one of the defining moments of Gielinor's history, and prepare to find out what will happen when Zaros and Zamorak finally meet again.

Speak to Kharshai in his room below the village of Rellekka. 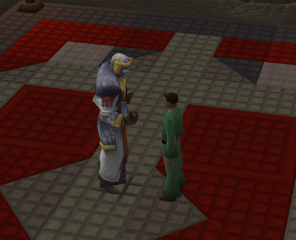 To begin, speak with Kharshai in his room under Rellekka.. He states that due to unknown reasons, the power of the Mahjarrat is fading and the race requires another ritual of rejuvenation. Fearing he will be sacrificed, he asks for your help in survival. Accept the quest. Kharshai surmises that the sudden increase in the energy loss of the Mahjarrat is due to the return of the gods, who are now leeching energy off the Mahjarrat. Tell him you are ready to go to the ritual site and he will... tell you to find your own way there.

The easiest way to get to the ritual site is to use the fairy ring code DKQ to travel to the Glacor cave. Once at the cave, exit it through the entrance to the north and, once outside the cave, head northwest to the marker. Touch the ritual marker and Kharshai and the rest of the Mahjarrat will appear. They will argue about what is going on until Zaros appears. Zaros will state a solution lies on Freneskae. They will still argue about whether they should or should not take the apparently only available solution until Kharshai gives you a charged engrammeter

and asks you to use it on the throne room below the Digsite west of Varrock.

With all five memories, return to ritual site. Investigate the ritual marker again to return to the ritual. Through Kharshai's memories, you will enter into second age Senntisten, playing as Kharshai. You will need to ask around and ask several members of the Zarosian Empire what is going on.

Perjour: South of the spawn point, ask to see his book.
Zebub: South of Perjour. Speak with him.
Broken mouthpiece: On a pillar near Zebub. Inspect it.
Duke Sucellus: North of the spawn point, ask him what has happened so far.
Jhallan: Slightly east of Sucellus. Speak with him.
Wall marking: Not actually on a wall but on a pillar Near Jhallan. Inspect it.

Broken enchantment: Near first set of stairs. Inspect it.
Pernix: Seen on the same floor as the broken enchantment, looking over the throne. Tell him an inquisitor was sent for, a red pair of horns was found, and that there is a plot to overthrow Zaros.
Athanakos: He is to the far east. The answers to his questions are Mah, Icthlarin, and a camel.

Now with the second set done, speak to Azzanadra, who is on the main floor. After this, go through the demon and the two humans and pass judgement on them. With this done, Zamorak will appear, wielding the Staff of Armadyl. Pick a side and a cutscene will occur, where Zamorak stabs Zaros with the Staff of Armadyl.

You will return to the present. The Mahjarrat will all agree they have no choice but to follow Zaros to Freneskae, despite uncertainty on Zaros' true intentions. For this next part, wield a shard of Zaros and bring ancient magicks because you will be facing hordes of Muspah. Head to the world gate south of Eagle's Peak, dial Freneskae and enter. Speak to Kharshai. Unfortunately, Zemouregal will kidnap Kharshai, leaving you all on your own.

Unequip your weapons and shield. Jump on the rock and ride the lava using your arrow keys. One arrow means you move one square over and then straighten out. Navigate around the rocks and lava geysers. If you have to choose between a rock and a geyser, choose the geyser as it may not eject lava when you are on it. The controls are terrible for this, but this part of the quest is safe (i.e. if you die you get to try again without losing anything). Playing 1960s surf music during this part of the quest may make this slightly more entertaining. 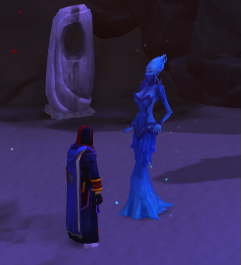 Now ride the lava rock again. You'll fall off a cliff, but be saved by Seren. She will tell you the reason for the loss of Mahjarrat energy is Mah - she is draining their energy to regain her power. Not only are the Mahjarrat being drained, but so are Zamorak, Zaros, and Seren. Once you are done speaking to Seren, enter the cave. You should find yourself with the rest of the Mahjarrat.

Speak to any Mahjarrat. Zaros will appear and begin the new ritual, but Zamorak will appear to denounce Zaros' plan. There will be a divine rumble, with Zaros appearing to beat Zamorak into submission, but not before Zamorak is able to partially rejuvenate the Mahjarrat. With clear trust issues, Zaros will suggest a pact, so both Zamorak and Zaros can be rejuvenated. Yet this would leave Zamorak in complete control of Zaros, and Zaros would have to willingly free Zamorak at the end of the ritual. In return for the rejuvenation, Zamorak promises to help Zaros once in Sliske's game. As the process begins, you will be disturbed by Mah. Zaros will tell you to check up on her. 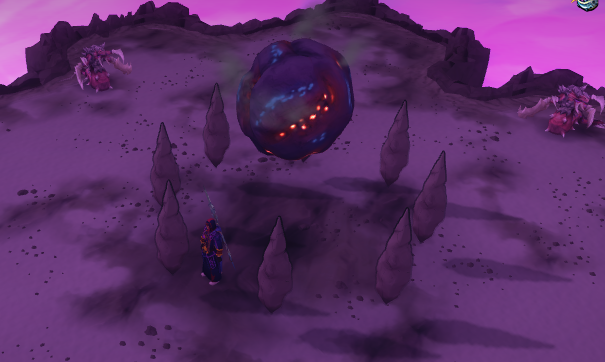 Take the western pathway and continue on until you reach Mah. Seren should be standing by her. Talk to her and she will tell you that Mah's nightmares are increasing due to the ritual. She will ask you to go into Mah's dreams and kill the monsters that manifest her nightmares. Accept this. Investigate the core of Mah in the center of this new room. Seren will give you a glowing orb. Use this orb to take out the shadows that approach the orb. Use the orb on the light shards to stop the incoming shadow.

When you are done this, you will find yourself in a new area. The concept here is to continue on the path, keeping the bar above your head low, and freeing Mahjarrat. Keeping your health bar low is done by avoiding darkness when possible. When the bar becomes full, you will be hit for 6% of your lifepoints every second. Move to the opposite side of the platform and touch the light pillar. Now, run to where Azzanadra and Zemouregal are and take the exit from one of them.

Now investigate the core again. This part is similar to the first, but with six shadow origins and two glowing orbs. Once you have done this, you will find yourself in another new area. Head south to the red light shard and then west. Touch the light shard at the end of this path and head to the center. Now, head to the eastern path and touch the light shard here. Head back and touch the center shard. Now go to the south and exit Zaros or Seren.

Now you will find yourself in the familiar light orb versus shadow fight, now with 8 shadow origins and 3 orbs. Once you finish with this, speak to Seren. The ritual has worked, but Mah is brain-dead. Seren will kill Mah to put her out of her misery.

Head back down to the ritual area and speak to Seren. She will rat out Zaros for killing Mah, while Zamorak will realize Seren is Mah's imposter and is culpable for the death of the Mahjarrat through rituals. After the discussion, Zaros will ask to meet you near Mah's remains. Here you will conclude the story. Congratulations, Quest Complete! 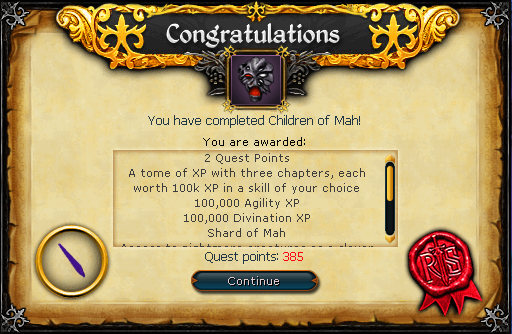 The new slayer monsters are the nightmare creatures encountered in the quest. They patrol the ritual area. 80 slayer is required to kill nightmare creatures. They drop level 85 gloves. You can pay your local slayer master to assign them to you for 50 slayer points.

The Shard of Mah is similar to the Shard of Zaros, except it works in the Heart of Gielinor instead of the regular God Wars Dungeon. 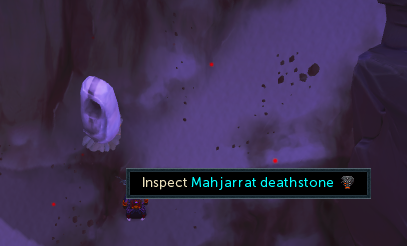 As you may have noticed, there are four Mahjarrat deathstones. Finding and reading all four is required for the master quest cape. Their locations:
1. Where you first enter from the world gate in Children of Mah
2. After the second muspah section of the quest
3. Where you first meet Seren, below the lava falls
4. Near the ritual stone