Begin by speaking to Brother Kojo at the Clock Tower south of Ardougne.

Firstly, talk to Brother Kojo at the Clock Tower just southwest on the path from the Ardougne Zoo. 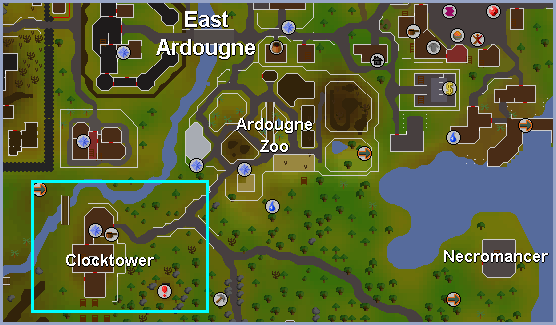 He will tell you that the clock is broken and that you need to get 4 different colored cogs from the dungeon below the tower to fix it. Go into the room to the south and head down the ladder. Go up the passage to the northeast until you see 4 large colored tiles on the floor. These tiles will indicate where the corresponding colored cogs are.

Here is a map of the Clock Tower dungeon: 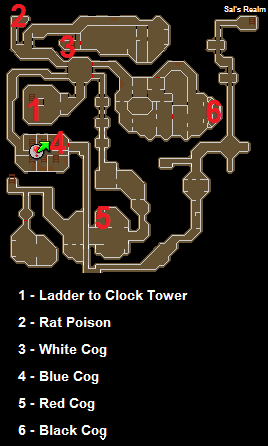 Getting the Black Cog

Head through the door closest to the black tile, which should be the northeast door. Walk through the doors and go as far east as you can (you may need to pass through 2 or more doors) until you see several level 2 Spiders.

You'll see the Black Cog surrounded by some short walls of fire. This is where the water or Ice Gloves come in handy. To pick up the cog, you must first use the bucket of water (or wear the Ice Gloves) with the cog. This will cool the cog down so that you can pick it up. After getting the cog, head back to the ladder where you first entered, but don't go up quite yet. You should see 4 spindles near the ladder; use the Black Cog with the Black Spindle.

Getting the Red Cog

Head into the southeast door, closest the red tile and head down the passageway until you see some level 53 Ogres. The Red Cog will be on the floor where the Ogres are. You can equip some armor and run over to grab it, if you think the Ogres will take too much damage on you. If you don't want to, don't waste time fighting them. Climb up the ladder where you came in from and use the Red Cog on the Red Spindle on the ground floor.

Getting the Blue Cog

Head into the southwest door closest to the blue tile and head down the passageway until you see several jailed creatures. The Blue Cog is locked inside of a cell with a Dungeon Rat. You need to find another way to get at it.

Head back up the ladder where you entered from and then go northeast out to where Brother Cedric is (from the Monk's Friend Quest) and you'll notice a ladder just south of the Camel cage in the Ardougne Zoo. Go down the ladder and follow the long, winding passage for awhile until you get to a wall that you can push. Push the wall to get inside and pick up the Blue Cog. To save time, climb up the ladder that's already there and you'll find yourself south of the Clock Tower. Head back inside and up the stairs and use the Blue Cog with the Blue Spindle.

Getting the White Cog

Head into the northwest door, closest to the white tile and follow the outer passageway first until you find some Rat Poison. Pick the Poison up and head back around to the inner passage that goes northeast. You should pass by some Dungeon Rats south of a metal fence, and you should find 2 red levers. Pull them to open up a rat cage. Head through the 2 gates and into the cage, and then use the poison that you picked up before with the Food Trough.

The Dungeon Rats will eat the poisoned food and begin to die. Wait until they've all died, and then you'll find that the gate to the west has become unhinged. Head through the west gate until you find the White Cog. Pick it up, head back to the ladder where you entered from, and then climb to the topmost floor. Now use the White Cog with the White Spindle.

Once you've place all of the Cogs in their corresponding spindles, head back to Brother Kojo and he will complement and reward you. 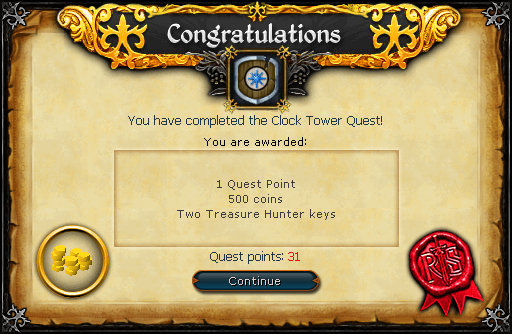