The High Priest of Icthlarin has problems again - this time with the inhabitants of Menaphos. Sophanem is recovering from the plague, yet most of its citizens are still trapped on the other side of the river. Diplomacy has failed and subterfuge beckons. Clearly, this is the sort of job that a shifty adventurer could excel in.

Begin by speaking to the High Priest of Icthlarin.

To begin this quest, speak with the High Priest of Icthlarin, he can be found in the temple of Sophanem. He informs you that, as the plague is not contiguous, he wishes to have the quarantine between Sophanem and Menaphos. However, making contact has not been possible, and he will ask for your help in making contact with the Menaphites. 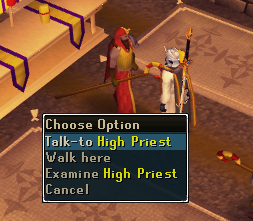 A cutscene will follow in which you see the delegation, led by the High Priest, being refused entry to Menaphos, and being fired upon by Menaphite guards.

It is then left up to you to make contact with the Sophanem citizens who are hiding in Menaphos from the plague, to inform them that it is safe to return. Questioning the High Priest will reveal that there is a temple dedicated to Scabaras in the city, and that this may reveal an underground passage into Menaphos. The High Priest tells you to speak to Jex, in the North East of the city, as he is the expert on the shrine. 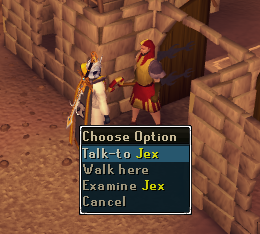 Jex informs you of a trapdoor under the temple, and, after some convincing, agrees to tell you how to open it, and grants you access to the dungeon below. Go down the ladder in the temple, and unlock the trapdoor to descend into the dungeon. The guards will offer you advice on how to survive down there. After reading their warning, it is time to enter the dungeon. 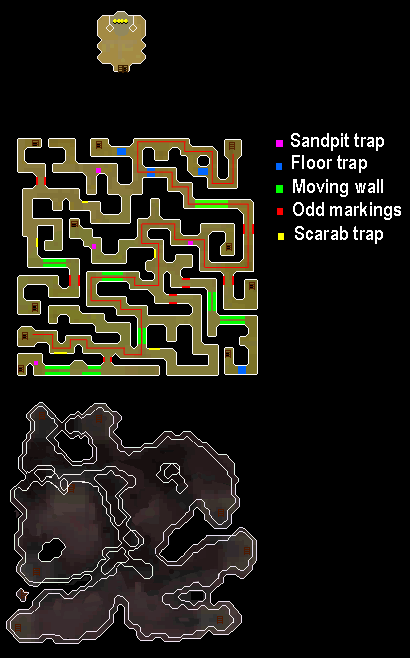 Note: If at any time you fail one of the traps, you may fall into a chamber below. Your light source will be extinguished and you will immediately be attacked by a number of strong foes. If this happens, it is recommended you immediately teleport out using your one click teleport.

Follow the path outlined in red on the above map, taking great care to avoid all the traps highlighted on the map. You will also come across scarabite monsters, and it is recommended you pray against these to avoid taking damage. It is advised to keep auto retaliate off whilst you are down here, as retaliating may cause you to take damage from hidden traps. It is easy enough to spot the traps you come across, as they look like the following:

Warning: failing any of the traps will cause substantial damage 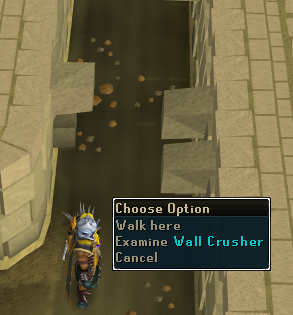 Can be disabled by searching the floor markings 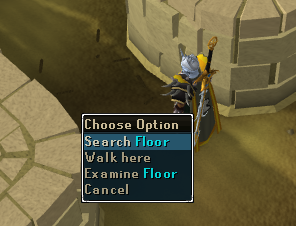 Can be disabled by searching the odd markings on the wall 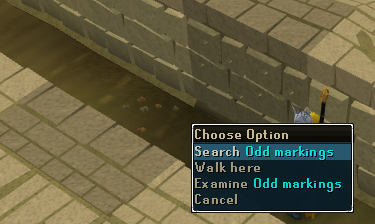 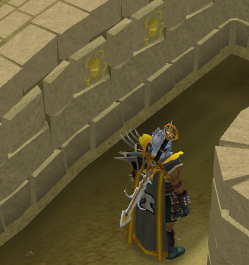 Can be avoided by not stepping on the sandpit 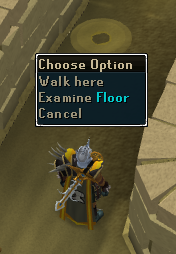 After completing the path outlined in the map above, go down the ladder. 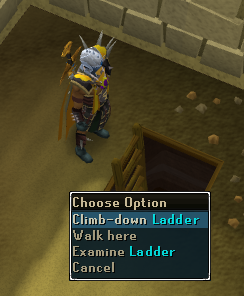 You will emerge in a dark cavern, with only one passage. This path is not filled with traps, and you must follow it around until you uncover the body of Kaleef. Search the body to obtain a piece of blood covered parchment.

Keep moving West and you will see Maisa. Speak to her and she will declare that you are not Kaleef. You will inform her that Kaleef is dead, and she begins to cry. She then tells you Kaleef was supposed to inform her how to escape Menaphos, and you offer to help each other. She questions on whether or not you are a friend of Al Kharid. To prove it you must answer the following questions:

Where did you first meet Prince Ali?
Draynor Village
Who helped you find the Prince?
Ozan and Leela 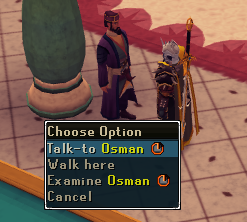 Talk to Osman about Sophanem, and he informs you that the lockdown on the city is in part thanks to him. He then offers to send one of his people to see Maisa, and after more argument, asks you why he should go to Sophanem to help his old enemies. You must select the answer that it would drive a wedge between the Menaphite cities. Osman then agrees to meet you in Sophanem shortly.

Return to the gates of Sophanem, and talk to Osman. You need to tell him of the secret entrance to the city, to the North. He then sets off, instructing you to look for him if he has not returned after two hours. 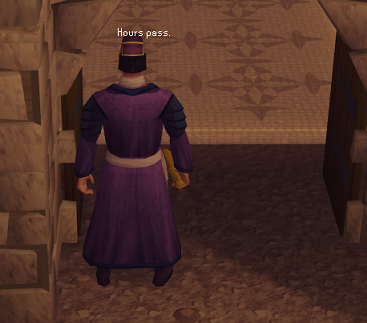 Note: This fight is difficult at low levels, and, as such, as is recommended you bring plenty of food, as well as stat boosting potions and prayer potions. During this fight it is also possible for your light source to be extinguished, so you will need to make sure it remains lit. You will also be frequently magically poisoned, so will need to ensure you drink anti-poison frequently. The scarab's range attack looks like an Earth spell, however, the scarab does not attack with magic, and the most efficient way of killing the scarab appears to be with combat spells.

After dozing off in the desert, you realize Osman has been gone for hours and you should go and look for him. You must now go inside Sophanem, and, again follow the map above to return to where you found Kaleef's body.

Once you have returned to Kaleef's body, a cutscene will ensue, during which Osman is overcome by a giant scarab. Following this you will have to fight a level 124 Giant Scarab which attacks with range and melee, and can summon Scarabite warriors to attack you. The scarab is weak to stab attacks. 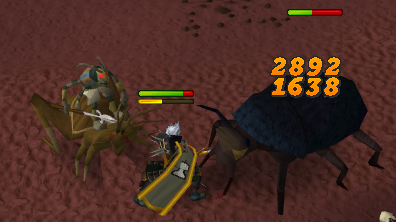 After you defeat the scarab, Osman will reappear. He will then tell you to pick up Kaleef's dagger, Keris, before returning to Al Kharid.

You must now return to speak to the High Priest in Sophanem, where you will complete the quest. 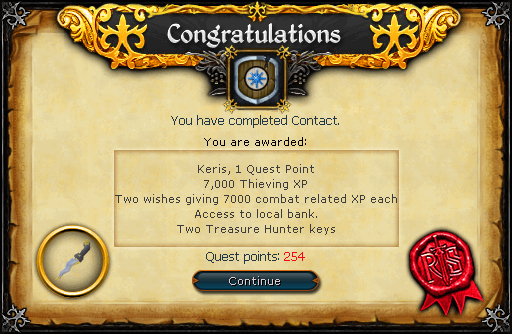 Keris A Lamp which gives you two wishes of 7,000 experience in combat skills other than Prayer. 7,000 Thieving experience. Access to the local bank. 2 Treasure Hunter Keys 2 Hearts of Ice