Head to the High Priest in the Temple of Icthlarin in Sophanem and talk to him. 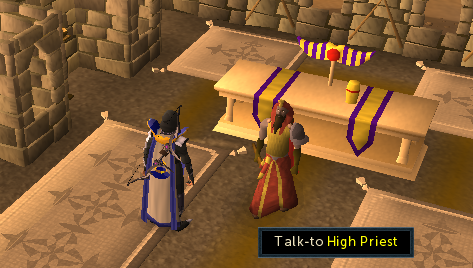 He will explain that a corpse has been brought into his hands that he wants you to identify. Head up one of the ladders within the temple and you will find the High Priest already there, ready to talk to you. 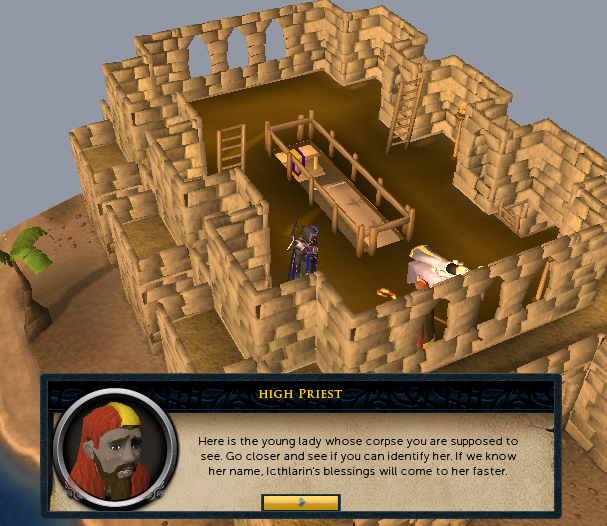 You will say that you don't recognize the person, so the High Priest will get ready to start embalming the body, starting by removing the Brain. Upon this comment, up jumps the body, showing that the person is still alive, much to the disappointment of the Priest.

Head over to the other side of the room and talk with Maisa. She will say that she's found tunnels leading from the east to those under Sophanem and she wants you to get permission from the High Priest to search them.

Climb back down the ladder and talk to the High Priest who will tell you that since the Scabaras religion has a specific reason for existence, if you find the High Priest of Scabaras you should try to pacify him rather than just brutally slaying him. 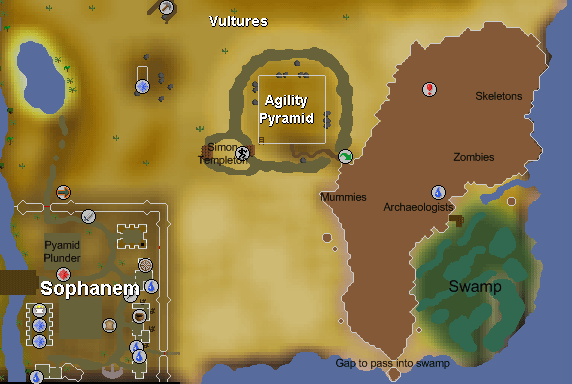 Head east of Sophanem, making your way round the southern tip of the rock near the Agility Pyramid into the swamp. Within the swamp are Crocodiles and several Scabaras creatures that have Melee and Range attacks. In the north-west corner of the Swamp is a Fallen Pillar that you need to climb over. 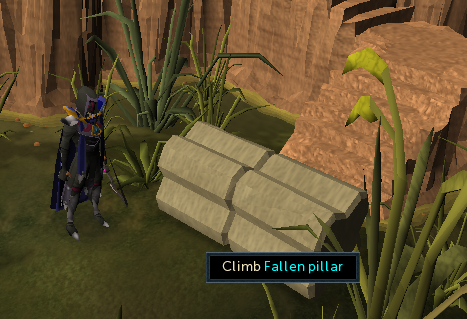 Make your way up the steps and talk to the Archaeologist next to a campfire near the top. Just next to here is a Spring that you can use to fill up any empty Waterskins. 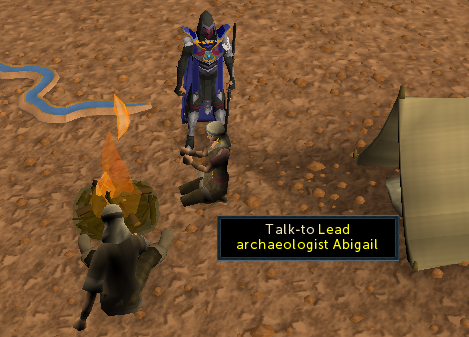 You will find out that you will need to talk to Simon Templeton, although beforehand your mathematical competence will need to be tested with a number of fairly simple questions.

The simple way to complete this without errors would be to find yourself a calculator and enter the values you are given, making sure you round down any answers you receive if there are decimals - E.g. 396.5 would be entered as 396. Once you have answered the questions, you will be told that Simon Templeton needs several items.

These items can either be obtained properly - from the Activities and Mining/Smithing the items yourself - or bought from the Grand Exchange.

To make the Bronze item you need into an Ancient item, you will need to distress it via one of two methods. If you have level 60 Crafting, it can be done by using a bucket of Ugthanki Dung on it when under the hot desert sun - somewhere that the Desert effect that causes you to require Waterskins happens. If you don't have level 60 Crafting, the Dung and Bronze items can be taken to the Archaeologists, a method that takes longer. Once all of the Bronze items have been oxidized, use them with the Empty Crate to get a Smelly Crate.

Once you have all the items, head to Simon Templeton at the Agility Pyramid and talk to him.

You will be given a Book called Scabaras Research that needs information in it that can be obtained by killing the nearby Mummies, Skeletons and Zombies.

Hint: Wearing a Salve Amulet will increase your Strength and Attack by 15% when fighting undead creatures. 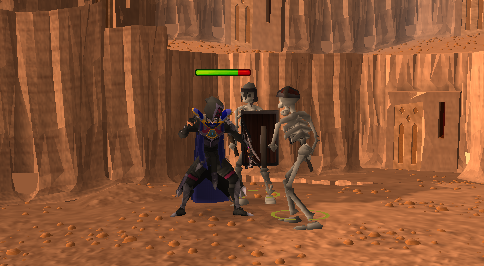 After obtaining one of the Scabarite Notes as a drop, it will need to be Copied to the log. You can keep track of how many have been copied by looking in your Quest Diary. 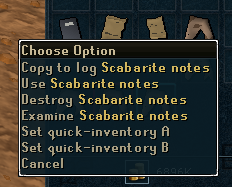 Once you have gathered at least four pieces of information (there are more that you can collect, but this is only optional), talk to the Archaeologists again and they will give you a Scabarite Key which you will notice has never been used. The reason for this is that the Archaeologists are too scared!

Head north to the area with the Skeletons and climb down the stairs. Once down, you should notice that to the south is the Clay Golem who you should speak to. 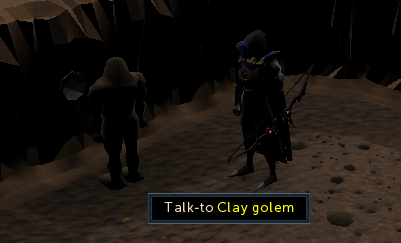 He will explain about a series of levers within rooms to the west that must be pulled in order to open a door even further along the corridor and the fact that to do this you must first light the Furnace to the north.

To do this, remove fuel from the storage box then use it with the Furnace. 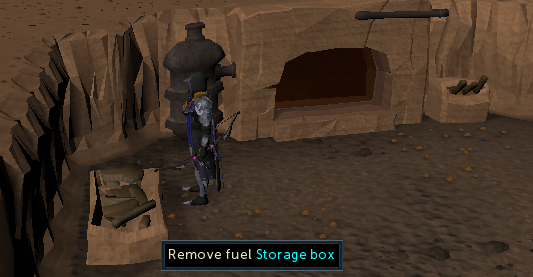 In total there are three logs in the Storage Box, so if you fail to complete the puzzles more than three times you will need to get your own logs to light the Furnace.

Talk to the Clay Golem again, making sure you have equipment to kill a level 132 Giant Scarab, and tell him how much pressure you want to be put into each room - the more pressure, the easier the challenge will be. The room with the narrow walkway will use the Agility skill, the empty room will use Strength, the room with the mysterious box will use Thieving and the room with the scarab will require Combat skills.

Tip: If you have a lower combat, it's recommended to put the most pressure on the Scarab's room. Doing so will decrease the Scarab's damage by about half, making it much easier to defeat.

The Scarab will use Melee and Ranged attacks, so putting on Protect from Melee while wearing Dragonhide Armour will lower the amount of damage you take, although some ranged attacks will still hit, making Food a nice thing to have in your inventory.

Once you've told the Golem which room you want to have each pressure in, it's time to go and pull the levers!

In the north-eastern Agility Room you will need to cross the pipe and pull the lever at the far end before coming back again. 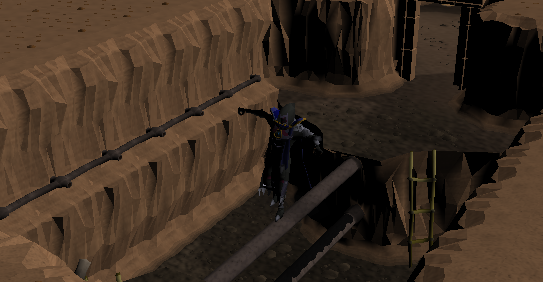 In the south-eastern Strength Room, all that you need to do is pull the lever.

The south-western Thieving Room doesn't require you to pull a lever, but instead to solve a puzzle. 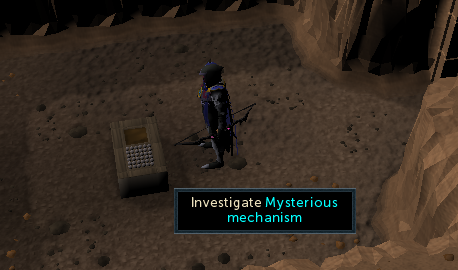 Enter the room and Investigate the Mysterious Mechanism in the middle of the floor, which will bring up a screen with a 6x6 grid on one side and a Cog, Pinion and Switch on the other, with a number beneath that shows how many goes you have left. 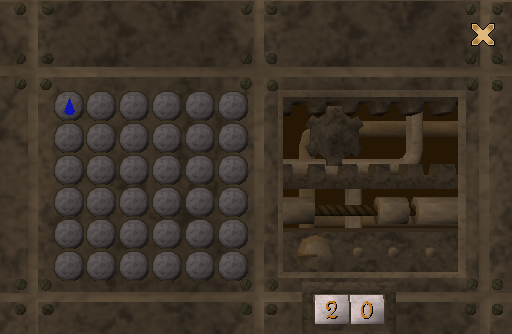 This is a point where it is worth finding a Pen and some Paper and drawing a 6x6 grid on it to help you solve the puzzle. To complete it, click on the Runes three at a time to show what they are (making sure you write down where they appear on your paper!). When you get three of the same Rune, they will lock in position. Once you have all the Runes locked in place, the lever will automatically be pulled. If at any point, you are running low on moves you may be able to click once on each the Cog, Pinion and Switch to obtain an extra five goes for each one - the pressure you chose the Golem to set decides how many of these extra options are available.

The last lever that needs pulling is the north-western one with the level 132 Giant Scarab in. This scarab will use both Ranged and Melee attacks, so using Protect from Missiles or Protect from Melee with strong melee (and ranged) Defence is advised. 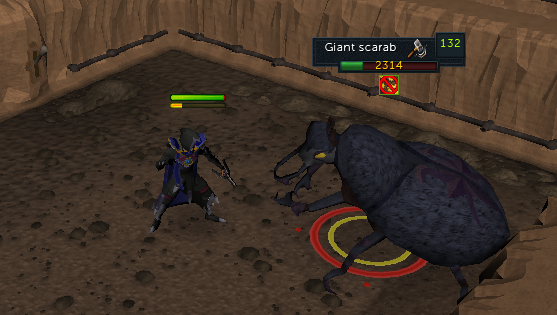 Once the scarab is killed, pull the lever in the room to open the vault door and leave the antechamber. If you leave the room without pulling the lever, the scarab will respawn.

Once you have successfully operated all levers to open the antechamber, you will never have to do this again. You can safely leave the dungeon area to restock, or you can teleport out if something goes wrong later on, and the door will remain open for your return.

Checking that you aren't out of Food or Prayer, head west along the passage while watching out for traps on the floor that will hit 150 damage easily when walking over them. 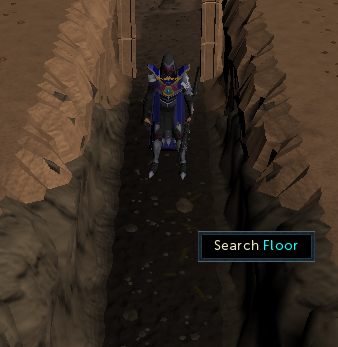 Carry on heading west until the path starts heading slightly south with numerous monsters visible in a large room. Head south, then carry on west past some floor traps until you come to a door with Scabara Mages on either side and go through the door.

Inside you will find the High Priest of Scabaras who you should talk to. 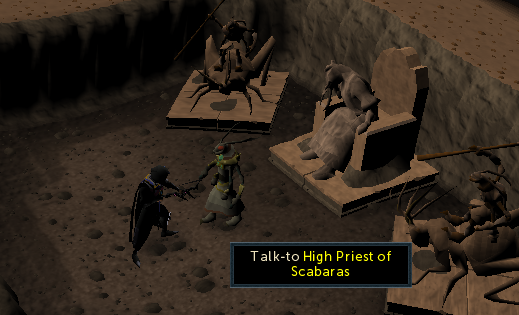 While talking to him, he will attack you at points, and may also summon Scarab Swarms to attack you. He will use all three types of attack - Melee, Magic and Range - although it's possible to see what one he is using by watching the weapon being held changing. 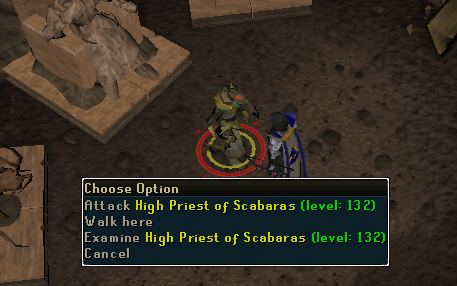 As well as normal attacks, you may find yourself Poisoned and Diseased in a similar way to during Zogre Flesh Eaters, requiring a Relicym's Balm to cure (you can also use the Thermal Pool from As a First Resort). Wearing a Ruby Bracelet of Inoculation can help protect against the onset of the disease for some time as well, but make sure you bring along some Relicym's Balm for when the protection of the bracelet wears off.

Eventually after attacking several times, the Priest will cease fighting and tell you to tell the High Priest in Sophanem that they won't attack if unprovoked.

Head back to the High Priest in Sophanem and talk to him to complete the Quest! 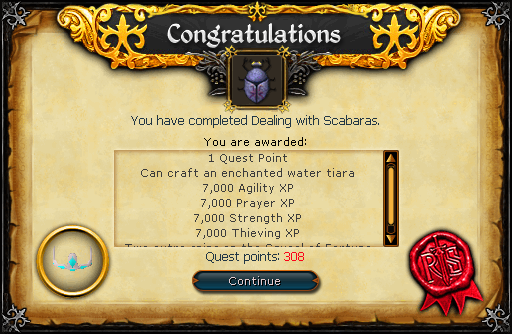 The enchanted tiara uses 3 water runes per charge, and there is no maximum charge although you can only have one Tiara at a time and level 50 in both Magic and Runecrafting is required to create it. When enchanting it, by using Water Runes with a Water Tiara, all the Water Runes in your inventory will be used. If you destroy the enchanted tiara, the components (water tiara and water runes) will fall to the floor, where you can pick them up again.

After taking the artefacts to Simon Templeton, you will be able to do a short task for him.

To start, talk to Simon Templeton who will tell you talk to the Guardian Mummy in the Pyramid Plunder Activity - check all four doors since he moves around. 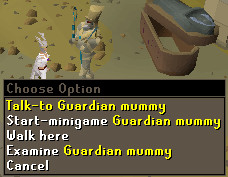 Ask the Mummy whether Simon can look at the artefacts in the temple to get the response that after past experiences, he refuses. Head back to Simon to receive your reward of being able to sell him Pyramid Plunder loot that isn't gold in a noted form.