Sanfew the Druid needs a special, rare herb for his ritual, and it just so happens that Trolls use this herb as an ingredient in their favourite dish. Can you find the herb and bring it back to Sanfew?

Sanfew requires a rare herb for the next part of the purifying ritual.

Travel back to the Troll Stronghold to find this herb that the trolls use as an ingredient for their favourite dish.

Begin by talking to Sanfew about helping him reclaim the Stone Circle.

First off, speak to Sanfew, located upstairs in the Taverley Herblore Shop. 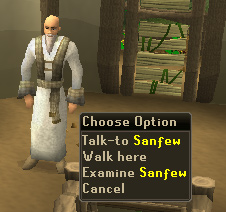 Ask if there's anything else you can do to help reclaim the Stone Circle and he says that he needs a special herb for the purification ritual. He tells you that the Trolls know where the herb is, so head north to the Troll Stronghold.

The easiest way to the Stronghold would be to go through Tenzing's house, buy some Climbing Boots for 12gp and head northeast along the path until you reach some rocks to climb over. Climb over the next 2 piles of rocks and head through the arena. Go through the cave to the west and then follow the path, using your Protect From Missiles prayer when you come across some rocks blocking the path to the side. Run past the Thrower Trolls, and then head southeast up the mountain. 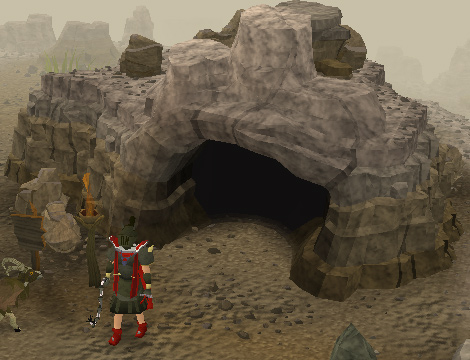 Climb the rocks and go inside the cave to find Eadgar. 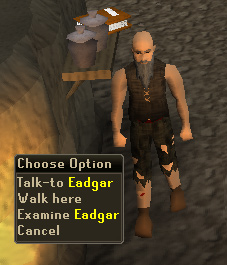 Talk to Eadgar and ask him about Goutweed, which he'll tell you to talk to the Troll Chef.

Head back down the mountain and head south to a group of Trolls. Now head north and up a hill, which leads into the Stronghold. Now head north, down the stairs and then south into the Kitchen, where you'll find Burntmeat. 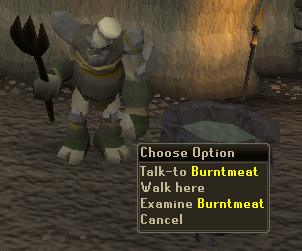 He says that he wants a tasty human to eat, so head back to Eadgar who says that you should get a Parrot.

Note: If, for some reason, you happen to lose the parrot or die with it in your inventory, you can get it back from Eadgar.

Of course, we can't give the Trolls a real Human to eat, so we'll have to think of something. Head to the Ardougne Zoo and talk to Parroty Pete, asking about when the Parrots were added and what they eat. 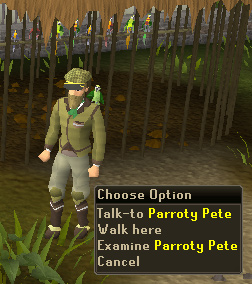 He says that they eat Pineapple Chunks. Head to the Gnome Stronghold to the northwest, and buy some Vodka for 5gp, and a Pineapple for 1gp from Heckle Funch's shop upstairs in the Grand Tree.

Now dice the Pineapple into chunks with your knife, and then use the Vodka with them to get Alco-Chunks

. Now go back to the Zoo and use the chunks with one of the Aviaries on the western side of the cage to feed a parrot, causing it to get sick. You'll then get a Drunk Parrot.

Bring the parrot back to Eadgar, who now tells you that you need to make it look, smell, talk and taste like a human. Go back down the mountain, head south past the trolls and into the Stronghold, heading north and down the stairs. Now go through the door to the east and down the stairs, which leads to the jail. Use the parrot with the Torture Rack to hide it, and then head back to Eadgar to find out the rest of the plan. 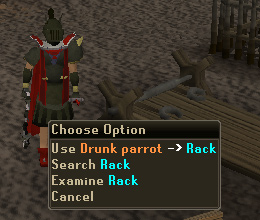 You'll need 2 sets of logs, 10 grain, 5 raw chicken and some dirty clothes to make it look like the parrot is a human. Head back to Sanfew in Taverley, and he says that Tegid may have some clothes for you. Tegid is found south of Sanfew washing clothes in the river. Tell him that Sanfew won't be very happy if he doesn't help, and he'll give you some Dirty Robes. Bring everything to Eadgar, along with a tinderbox, vial of water, Ranarr Weed, and a Pestle and Mortar, and he'll take 1 set of logs, the grain, chicken and robes.

After bringing everything to Eadgar, he tells you that you now need to make a Troll Truth Potion so that the cook won't lie to you about the herb. 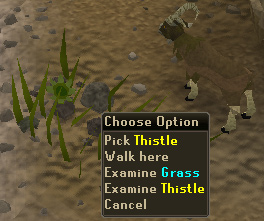 to pick. Light a fire and use the thistle with it to dry it, and then grind it up using the pestle with it. Mix the Ranarr Weed into the vial of water, and add the ground thistle to it to make a Troll Potion (gives 78 Herblore Experience). Now bring the potion back to Eadgar and he tells you to get the parrot from the Jail.

The Plan in Action

Search the Torture Rack to get the parrot and bring it back to Eadgar, who makes you a Fake Man. Bring this to Burntmeat who eats it, and then ask him where the Goutweed is. He tells you that it's in the Storeroom, and the key is hidden in a fake bottom of a kitchen drawer. Search the Kitchen Drawers in the southeast corner of the room for a Storeroom Key

. Now head down the stairs to the north. 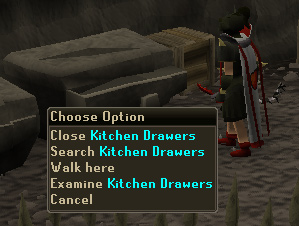 Open the Storeroom door with the key, switch on your run energy and wait for the troll approaching to pass by your door. Run behind the top row of crates, as illustrated here: 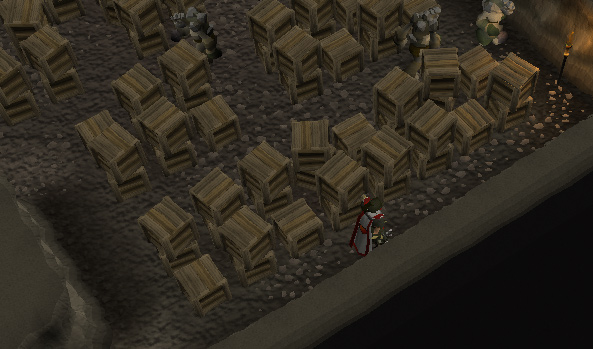 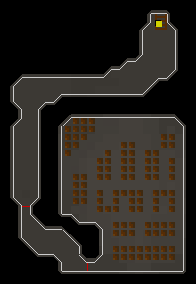 Speed is of the essence. If a troll catches you, you'll be hit and teleported outside the door. These trolls do not have to actually touch you for this to happen, only see you, therefore you have very little time for the first move.

Watch out for two trolls. The one circling the crates to the west of the door, heading towards you as you stand either at the door or above the crates. If it turns north, then you have to move now. If you allow it head east, with you still standing there, you will be hit. The second troll to watch is the one immediately to the south of you. It is a danger to you only as it walks north, as soon as it's turned the corner, start running.

Head to the area that looks like a fallen 'S'. You can click on your position on the mini-map to avoid stalling in the maze itself. You need the space facing away from you, as illustrated here: 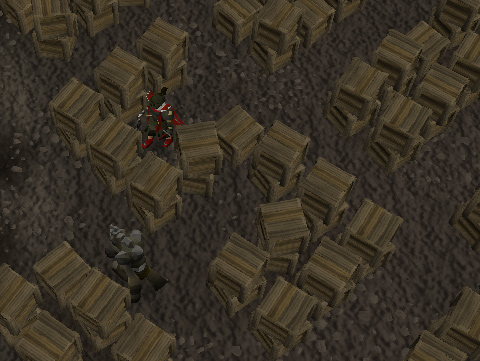 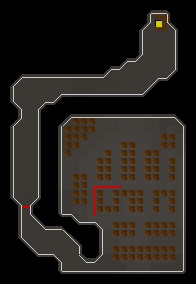 You are safe here until you are ready to run again. Wait until the troll approaching from the south has turned the corner again, then run down to the side of the sleeping troll (you'll see it initially as a yellow dot at the very south of your mini map). Search the goutweed crate as soon as you reach it. You will get hit for around 30 Life Points and end up outside the door again, but you should have the goutweed in your inventory.

Take the goutweed back to Sanfew to get your reward. 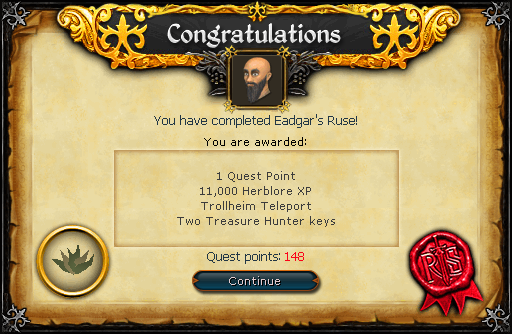 The ability to use Trollheim Teleport 11,000 Herblore experience Sanfew will also trade any Goutweed you bring him for other herbs.