To begin, speak to either Alfrick or Freya near the dock that takes you to Miscellania in Rellekka. 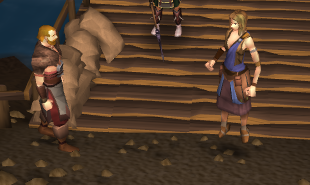 In classic Fremennik style, they will be arguing over the use of magic in a monument to a powerful Fremennik. Interrupt them to learn that the Fremennik Hero "V" is returning from a far off plane. They will ask you to sort out their disagreement, which you should accept.

To prepare for V's feast, you will be asked to find out what V would want in a return party. The two suggest you ask the members of Rellekka, particularly the members of council that voted for your inclusion as a Fremennik.

There are seven pieces of information needed.

Brundt the Chieftain - V would like to be remembered as a hero, not a god.
Manni the Reveler - V's last feast with the Fremennik people was a victory feast.
Olaf the Bard - Suggests playing a ballad about V's repelling of a basilisk.
Swensen the Navigator - Winter's eye is V's favorite flower.
Sigmund the Merchant - V left at the end of the third age.
Peer the Seer - V was only interested in the simple magics, like air and water spells.
Yrsa - V respected Guthix and the edicts.

Return to Alfrick and Freya and ask to prepare the party. Fill in the correct answers in the interface. 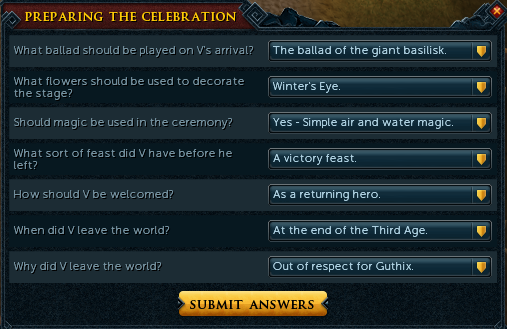 The feast will begin and V will return. However something will be wrong with him. Upon completion of the feast, head to Alfrick and you will be transported to an ancient trading post. Enter the cave entrance just to the south and speak to V. He will tell you that his power is dripping from his body and for whatever reason creating duplicates of objects. He needs you to help find his lost power. Exit the cave and look for the following objects:

Once you find the first object, V will drain the energy. Now, find the duplicate and channel the energy towards V. The island is small, so finding both objects should be easy.

Once you are done with this, return to V in the cave. V will still seem weak. Suddenly, several dragonkin will appear. V will be blasted and then killed by the dragonkin. 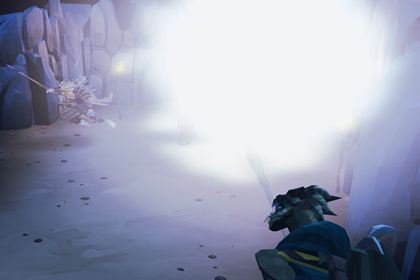 Upon V's death, enter the door to the north and search V's belongings. Read through the book you retrieve and you will get some map fragments

. Here you will have to solve a minor puzzle. Drag the map pieces on the left to the right to complete this puzzle. Several pieces on the right should be fixed to help you. The final map will look like this. 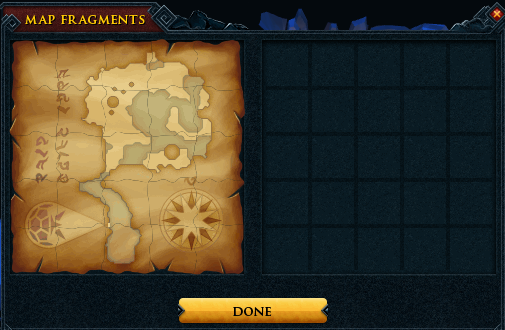 You will recognize the map as the ancient caverns under Baxtorian Falls. Note: You will need antifire protection for the rest of this section. Lodestone teleport to Ardougne and run northwest until you reach the whirpool. Run through the whirlpool and then run up the southwest stairs to where Kuradal is. Continue along the path until you find a locked door on the western wall. Use soft clay with it to obtain a key mould

With the mithril key, return to locked ancient door. Unlock and open it (make sure you have antifire protection first). You will find yourself with a level 116 adamant dragon. Kill it (it is weak to air spells) and continue. After the cutscene, walk west (DO NOT talk to Sakrith) and you will find yourself in a room with stepping stones. Hop around until you get to the chest and grab the Dragonkin key

. Now jump around until you arrive at the pressure pads. The idea here is to traverse this section without stepping on a pressure pad. This will involve pushing crates out of your way, but be careful not to push any crates onto a pressure plate. Two crates can be pushed at one time.

Once you have completed this, enter the room to the east and search the chest for some notes

and a dragonkin protective charm

. Read the notes and equip the charm.

Teleport to Port Sarim and enter the last level of the Grotworm lair. Find some stairs in the middle of the floor and descend them. 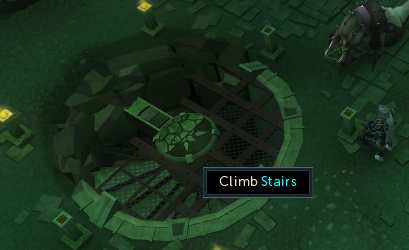 Climb down and you will be noticed by Tarshak. After the dialogue, he will attack you. This fight is not incredibly difficult but can catch an unprepared soul off guard. When Tarshak is preparing his blast, run to a different direction. Familiars such as beast of burdens are allowed here.

When you have finished off Tarshak, Phalaks will tell you he has run off to the Brimhaven Dungeon. Prepare for a defensive boss fight. Bring a beast of burden filled with high tier food and Saradomin Brews. You should also bring an overload or super restore because you'll need to use a little offense in the fight. Enter the Brimhaven Dungeon and run all the way down near the Iron and Steel Dragon room. On the western wall there should be a tunnel entrance (highlighted on your minimap). You'll begin yelling at Tarshak until you realize he's morphed into the spitting image of my Junior prom date. 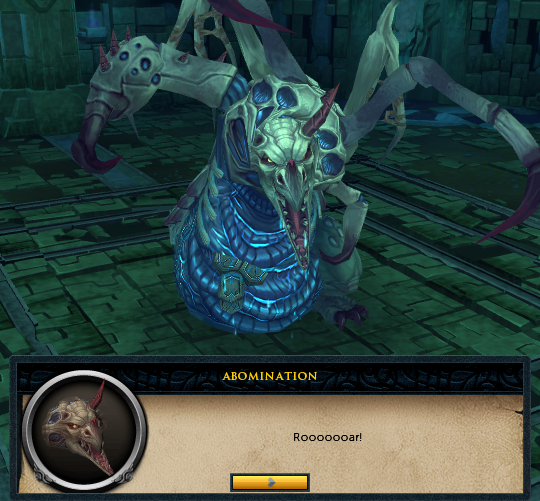 The fight will be unorthodox for a boss fight. The goal of the first half of the boss fight will be to collapse the roof on Tarshak. This will be done by mining away the foundation of the pillars holding up the roof. When you are done weakening the pillars, you'll have to destroy them by getting by Tarshak's fire bomb attacks while standing next to the pillar. Tarshak will not be attackable in the first half. There are four pillars in total. Tarshak also has a few attacks:

If you get caught in flames or are hit by a fire bomb, you will bleed damage. This can be stopped by running through one of the two pools of water in the room. Using the surge ability is useful for getting out of a certain quadrant quickly.

When you collapse the roof, Tarshak will get smashed but climb out from under the rubble. He will now be attackable. Put on protect from melee (he mainly attacks with melee) or soulsplit. The roof will also collapse and boulder will rain on you and Tarshak. If you or Tarshak are caught in the boulder rain you will be hit constant damage. Running around and luring Tarshak to the boulders can be used to kill Tarshak, however Tarshak can surge to catch up with you. You will hardly be able to avoid Tarshak's melee attacks. Tarshak can also use the blast attack he used in the first fight. Continue to stay alive by avoiding the boulders and Tarshak's heavy hitting attacks and attack Tarshak when possible. You should eventually be able to kill Tarshak.

After killing Tarshak, Kerepac, Phalaks, and another dragonkin will appear to see what happened. Shortly after that, three more dragonkin will come. The dragonkin will fight and you will run out of the tunnel. Return to Freya and Alfrick and they will take you to the ancient trading post. Here they will show you a shrine to V and you will complete the quest. Congratulations, Quest Complete! 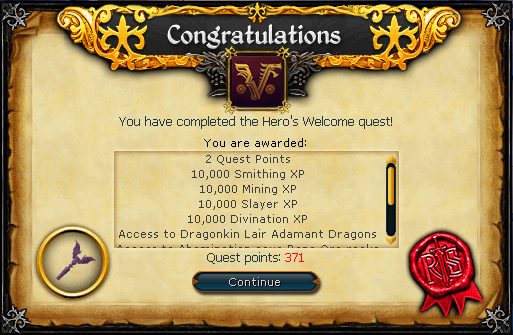