Begin by speaking to King Arthur in Camelot Castle.

Firstly, talk to King Arthur in Camelot Castle and ask him about becoming a Knight. Then ask if he has any quests for you, and he will tell you to speak to Merlin. Go up the staircase to the west, and Merlin will be in his workshop to the east side of the room. Discuss the Holy Grail and he will send you to speak to Sir Galahad. 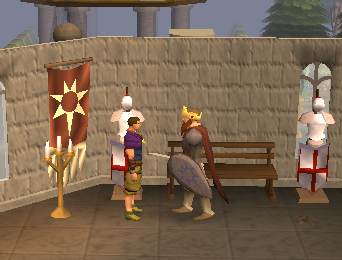 Galahad can be found in a house directly west of McGrubbor's Wood, which is located west of the Seers' Village. Ask him about the Holy Grail, but you won't get much info out of him. You'll discover that he 'borrowed' a napkin from the table of the Fisher King's Realm, but that's about all he tells you. 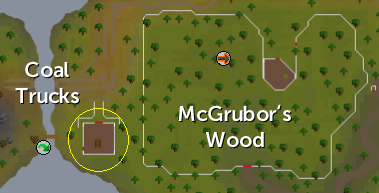 Now stash all of your weapons and armor in the bank and head to Port Sarim. Talk to one of the Monks of Entrana on the dock and take the boat to Entrana. Speak to the High Priest in the church about the Holy Grail until a Crone interrupts you. Ask her about the whistle.

Head back to Sir Galahad and tell him that you seek an item from the Realm of the Fisher King. He'll reluctantly give you a Holy Table Napkin.

Realm of the Fisher King

Make your way to Draynor Manor and climb up the staircase and ladder to get to the top floor, where you'll find Professor Oddenstein (from the Ernest the Chicken Quest). When you enter the small southern room, you'll see that there are some Magic Whistles on the table. While carrying the Holy Napkin in your backpack, take two Magic Whistles from the table.

Now teleport to Ardougne and gather everything you need for combat, including food, weapons and armor, Prayer Restore Potions, at least 30gp, (Camelot Teleport Runes or an extra 30gp to leave the island) and Excalibur. If you don't have the Excalibur Sword, you can get one from the Lady of the Lake. Take the boat to Brimhaven. 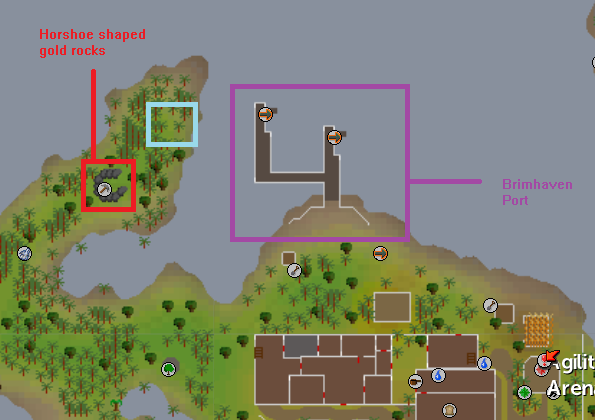 Once at Brimhaven, head west of the city until you find some Poison Scorpions. Go north until you reach some horseshoe-shaped Gold rocks, and then continue northeast until you reach a lookout tower. Stand under it and blow on the Magic Whistle and you'll be teleported to a place that looks like the plague went through it. 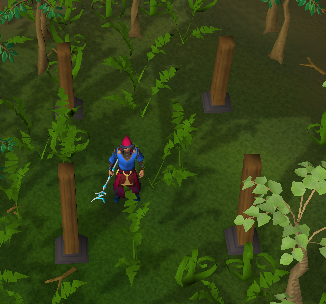 The Black Knight Titan will be waiting for you here. Talk to him and he will shout at you and attack. He is only level 28, but has a high defence so just make sure that you bring some decent food and keep your hits up. The Black Knight Titan can also be easily safespotted. Bring him down to nearly no Life Points with your weapon, and then switch to Excalibur and deal the final blow. If you don't kill him with Excalibur, he will fully regenerate his Life Points and you will need to start over again. 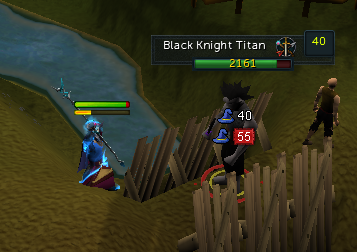 Once you've slaughtered the Titan, head southeast along the river until you find a Fisherman. Ask him how to get into the Fisher King's castle, and then head west, then south to find the castle. You'll find a small Grail Bell lying on the ground in front of the castle, which you can pick up. Ring it and a Bell Maiden will let you inside. 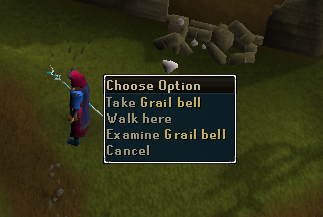 Go through the door to the south, and then up the staircase in the middle of the room. Now talk to the Fisher King. He will tell you that he is sick and that he would like you to find his son Percival so that he can be come the next ruler. Teleport to Camelot or blow your Whistle again to arrive back on Karamja, then take the boat to Ardougne and head to Camelot.

Once in Camelot, go speak to King Arthur about Percival. He will tell you that he went on a quest to find some Golden Boots, and he will give you a Magic Feather to locate the Fisher King's son with. Blow on the feather and it will direct you in which direction to go.

The feather will eventually guide you to Goblin Village north of Falador. Go to the eastern-most hut and Prod at the sacks inside. You'll hear some muffled sounds and such, and you'll find that Percival has been tied up! Open the sacks and he will emerge. Give him a whistle and then head back to the Fisher King's Castle as you did before (head to the lookout tower on Karamja and blow on the Whistle). 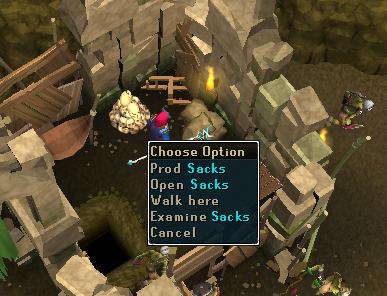 The land has changed a bit, and when you arrive at the new King Percival's castle he will extend his many thanks. He can be found where his father was before. 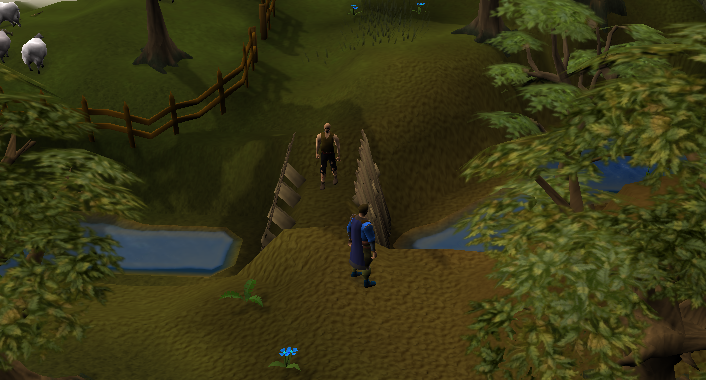 After speaking to him, head downstairs and head to the tower on the eastern side of the castle. Go up the spiral staircase and up the ladder and you'll finally see the Holy Grail! 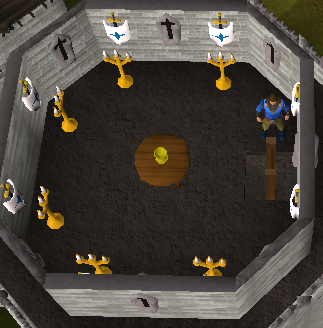 Take it, blow your Whistle and arrive back on Karamja. Now head back to Camelot and speak to King Arthur for your reward. 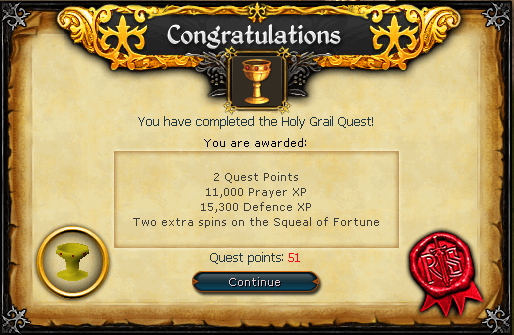