Speak to Linza at the Burthorpe smithy.

To start, speak to Linza at the smithy in western Burthorpe. 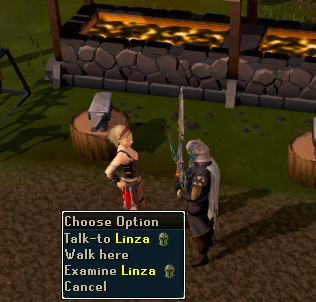 She will tell you that a few people have gone missing and that she needs your help. Accept the quest. Linza suggests speaking with Relomia, Sliske's emissary, in Draynor.

Teleport to Draynor and speak to Relomia, who will be there with Linza. She will tell you that Sliske has been kidnapped. Teleport to Daemonheim and then head south to the highlighted area on the minimap. Speak to Linza here and she will alert you to the presence of a trapdoor that has recently appeared. Head down into the trapdoor and after a cutscene you will find yourself imprisoned with Sliske.

Unlock Sliske's door and speak to him. It will turn out the whole thing is a lie done by Sliske to get your attention. Exit the prison and you will find yourself with Sliske and the kidnapped. He will tell you that he wants you to play a game with the Barrows Brothers, otherwise he will kill the hostages. 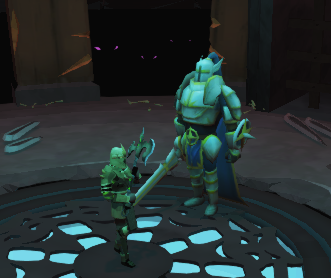 Enter the fighting pit and talk to Dharok. You will find him killing weaker Saradomin warriors against his will. To stop him, you will need to unleash a Saradomin champion to beat Dharok. Unleash the gate to the south and you will find yourself in the body of the champion. Speak to Dharok and then kill him with three practiced stabs.

Ahrim's trial will consist of a maze where the objective is to get to the center. At certain checkpoints Ahrim will either have to hurt himself or hurt someone else (one of the three human adventurers). At first you will be able to coax Ahrim into hurting himself, but later on he will refuse to hurt himself and instead choose to hurt someone else, regardless of your input. The choices to hurt Ahrim or other do not affect anything after this maze.

Here is a fairly complete picture of the maze with the checkpoints. The first checkpoint is red, the second is blue, the third is yellow, the fourth is green, and the fifth is orange. 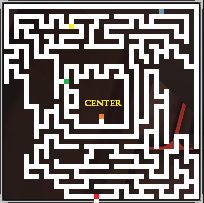 After you have finished the puzzle, there will be a pow-wow between Ahrim, Guthan, and an old friend. Ahrim will kill the old friend and you will be finished with this part.

Enter through the impressive doorway and speak to Verac. Sliske will tell you that he is being torn apart from by Saradomin and Zamorak statues. To free him, you will either need a Saradomin key or a Zamorak key. Verac wants to be freed using the Zamorak key, but (as you may find out yourself) this is impossible because at heart Verac is truly Zamorakian. The Zamorak keys will keep breaking and will never be able to free Verac. Instead you will have to free Verac using the Saradomin key stuck inside Verac's abdomen, which you obtain by speaking to Verac.

After freeing Verac, a tunnel will open near the collapsed statue. Pick up the four books, skim them, and then investigate the orrery. Now, investigate the shadow focus and after the cutscene you will be finished with this area.

While you are investigating Sliske's office, Linza will be dealing with the fourth barrows brother, Guthan. as Linza, approach Guthan and ask him what his secret is. It will be revealed that Guthan sold out the other brothers to Sliske, which will not go over well with the other brothers. When Sliske chimes in, he will realize you are missing from the conversation. He will come in and find you and then try to take your soul until he realizes you have seen his plans. A few other things will surface and you will have to escape. Continue running along the passageway until you come across two ropes. Take the eastern rope; the western rope won't hold your weight.

Once you have escaped, speak to Dharok nearby to finish the quest. Congratulations, quest complete! 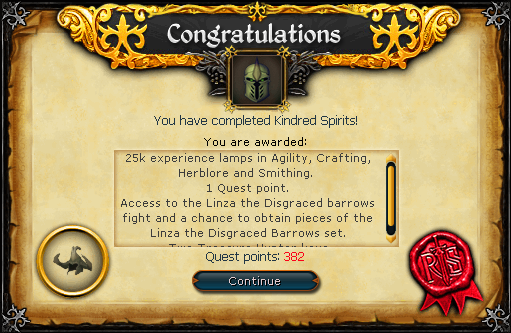 The Linza the Disgraced armour set is a tier 80 melee set that degrades like the other Barrows sets. It is augmentable and comes with a shield along a weapon (a single-handed warhammer). The set passive effect gives you a chance to perform a counterattack when struck in combat.