Begin by talking to the Hamal the Chieftain in the Mountain Camp east of Rellekka.

Firstly, head to the Mountain Camp located just east of Rellekka, and you'll see two paths. There should be a Guard standing near a Pile of Rocks, and he refuses to let you pass. Follow the path to the northwest until you find a large

Boulder, and then use your Rope with it to slide down. Follow the trail east into the village, and speak to Hamal the Chieftain in the tent to the far east of the village.

Ask Hamal why everyone is being so hostile, and then ask why they are living up in the mountain. He will tell you that his daughter is missing, so tell him that you will search for her and he agrees to let you help. You can now walk around and speak to the villagers.

. Pick up the Pole

on the floor of Jokul's tent, which is just north of Hamal. Pick up the Plank inside Jokul's tent as well. Head along the path to the northwest until you find Ragnar, standing near a Tall Tree near the lake. He says that he was supposed to marry Asleif, and that she used to sing near the lake before she disappeared.

Use the Mud on the Tall Tree to make the bark less slippery, and then climb it to reach the small island. Now use the Pole with the Clump of Rocks in the water to jump across, and then use a Plank with the Flat Stone to walk across onto the island in the center of the lake. Listen to the Shining Pool to hear Asleif's voice, and then ask it what it wants. 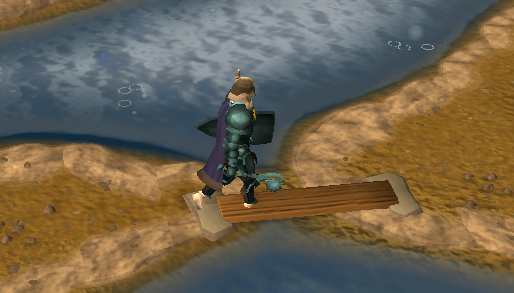 It turns out that Asleif is dead, and that the voice is her spirit. She wants you to reunite the 2 tribes, and find a new food supply for her people. Tell her that you will help, and then use a Plank with the Flat Stone and choose to go back to shore.

Now go back to Hamal and ask about the people of Rellekka. Ask him why he hates them so much, and it seems that he doesn't hate them, but he just tries to ignore them. He also tells you that Svidi, their representative, has not yet returned from Rellekka.

Head west along the path and you can now climb over the Pile of Rocks guarded by the Guard at the entrance to the camp. He can be found wandering around the Fremennik Province lodestone. Players under level 96 will have to defend against the aggressive level 96 black unicorns, which can make having dialouge difficult. If you are under level 96 try to talk to him north of where the black unicorns are. Talk to him and he will tell you that doesn't want to go to the Fremennik Village because he fears that he will be killed. Ask if you can persuade him, and then offer to get him an agreement of safe passage.

Talk to Brundt the Chieftain in the Hall of the Fremennik Village and ask him about the Mountain Camp. He wants the Ancient Rock

that they stole, in exchange for the safe passage agreement. Go back to the camp and go inside of the tent to the southwest of Hamal. Use your Pickaxe with the Ancient Rock to get Half of a Rock. Bring this to Brundt in exchange for the Safety Guarantee, which you can bring to Svidi.

Speak to Hamal again and ask him about the food supply, which he says is a bit short. Talk to Jokul in the tent to the north, and he mentions a fruit called White Pearl that can grow anywhere.

Head to the Gnome Glider on White Wolf Mountain near Catherby and pick the White Pearl from the Thorny Bush while wearing a pair of gloves or gauntlets. Eat the fruit and you should spit the Seed

out. Bring this back to Hamal.

Now go back to the Shining Pool in the center of the lake and you will now need to convince her father that she is dead and that her body was dragged away by some sort of animal. Head back to the shore and follow the path along the lake to the north where you will find some trees. Chop the trees to make a path, and then enter the Cave.

At the end of the passage you'll find The Kendal, who you can talk to. Say that 'it's just me,' mention a sacrifice, say that he's just a man in a bearsuit, and then ask to see the girl's remains. Tell him that you will kill him, and then attack him.

The Kendal is a level 70 monster who uses melee attacks, so using your Protect From Melee prayer while fighting him will reduce any damage from being dealt to you. 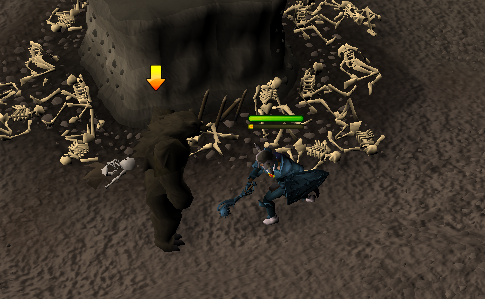 After he's dead, you will have his Bearhead in your backpack. Pick up the Corpse of Woman located in the center of the room, where there are also bones littering the ground.

Bring these items back to Hamal and tell him that the bear was a fake. He will ask you to bury the corpse on the island in the lake, and then build a Cairn of rocks over her grave. Pick up 5 Muddy Rocks that are lying around the village, and then speak to Ragnar to get Asleif's Necklace. Head back to the island where you spoke to Asleif and choose the Bury option on the Corpse to bury her. Now just use a stone on the Grave to build the Cairn, and you'll be finished with the quest. 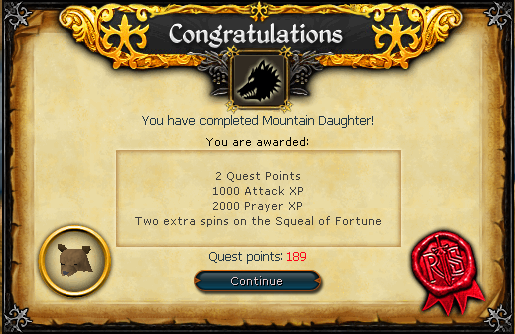 Bearhead that you can wear like a Mask. 2,000 Prayer experience 1,000 Attack experience 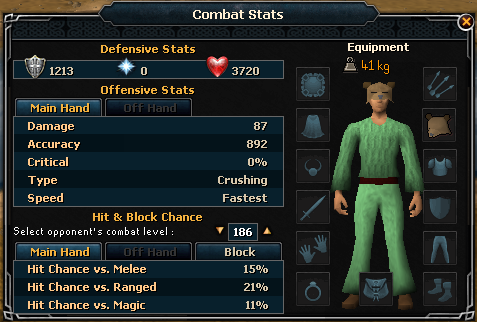