Hint: the Butler did not do it!

Talk to one of the guards around Sinclair Mansion.

Start off by talking to one of the guards near Sinclair Mansion, located just north of the Seers' Village. He tells you that Lord Sinclair has been murdered and they can't figure out who killed him. Offer your help, and he says that you should question the family about where they were and such info that would help solve the crime. 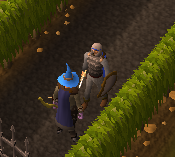 Go inside of the mansion and take a look at the east-most room. This is where the murder took place, and the main evidence of the crime can be found. Take the Pungent Pot

from the table, as well as the Criminal's Dagger

from the center of the room. Investigate the Smashed Window on the eastern wall to find the Criminal's Thread

Now leave the house and talk to Gossip, found in the chicken pen in the southwest corner of the estate. Ask him about who he thinks killed Lord Sinclair, and he mentions about a Poison Seller that came by. Head back to the Seers Village and talk to the Poison Seller in the tavern at the west end of town. Ask him why he sold the family poison, and he says that he sold a bottle to each of the family members.

Go back to the mansion and talk to each of the servants and family about why they bought the poison, and they each tell you what they did with it:

Investigate each of these places after speaking to the people, and there should be one place that hasn't been touched with the poison. That person is the culprit, but you're going to need more evidence to prove it.

Depending on who is lying, you'll have to search the barrel in their room to obtain an item that belongs to the criminal. Bob and Anna's rooms are downstairs, while Carol, Dave, Frank and Elizabeth's rooms are upstairs. Once you have their item, it's time to get some solid evidence against them.

Outside of the mansion is a shed on the west side, where you should find some Flypaper that will prove to be helpful. Take 2 pieces and go back inside the mansion to the kitchen, and click on the barrel to fill your Pot with some flour. Use the flour on the Criminal's Dagger, and then use some Flypaper on it to get an Unknown Fingerprint.

Do the same for the culprit's item, and use that fingerprint with the unknown one to see that they match. Once you've got the evidence, bring it back to one of the guards to get your reward. 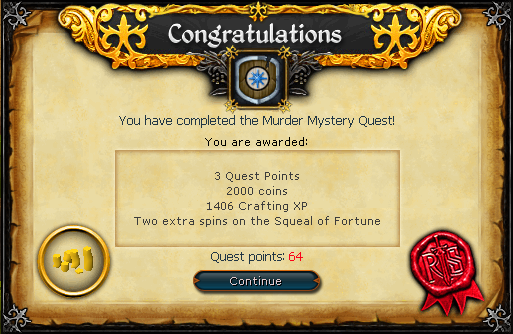