By: Kemosabe
Special Thanks to: Ambo100, heb0, Sleepy
Original Guide by: Salmoneus

The Observatory southwest of East Ardougne has been looted by a family of Goblins. Your job here is to assist the Professor in rebuilding the destroyed Observatory in exchange for a reward that is out of this world!

The Observatory in south-west Ardougne has been ransacked by a family of nearby goblins.

Can you help the professor to rebuild it?

Head east out of Castle Wars and then north up the path and over the two bridges. Keep heading north and you'll find the Observatory Professor. He's trying to advertise how excellent the observatory is but his assistant keeps butting in and telling you the telescope is broken. He asks you to find the materials to fix the telescope with. If you already have a bronze bar, 3 planks and some molten glass with you, then you can already get half the quest done in the space of minutes. 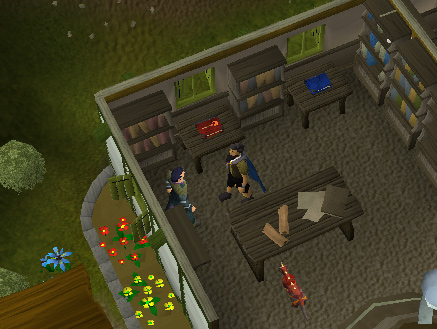 After handing the Professor all the materials, the student again will butt in telling you and the Professor that the lens mould was taken, which means you'll need to retrieve it for them. Head to the Observatory Village just east of the Reception where you started the quest. If you don't have an antipoison potion with you, the abandoned building in the south east of the village has a respawning 1-dose super antipoison. If you're ready to head into the dungeon, go to the western building and head down the stairs. In the dungeon there are a lot of chests, each located at a dead end. Keep running through the dungeon and searching the chests until you get a kitchen key. If a chest doesn't have the kitchen key then there's a chance a poisonous spider will appear and poison you.

Once you have the kitchen key, you'll need to head over to the goblin kitchen. If you don't know where it is, you can find it by heading back to the entrance of the dungeon. Then head north east and follow that tunnel round to the west until you find the kitchen. There's a sleeping guard at the entrance that you need to prod to wake up. You'll have to kill him, then you can go through into the kitchen. Inspect the cooking pot and you'll find the lens mould. 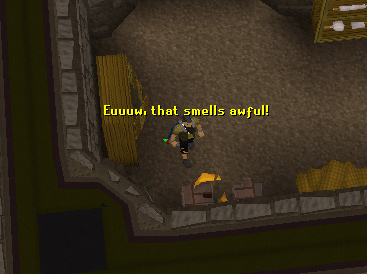 Head back to the Observatory Professor when you have the lens mould. He'll get you to make the lens by using the molten glass on the lens mould. Give the lens to him and he'll tell you to head to the Observatory to see the telescope in action. To get there you'll need to go back to the dungeon. Follow the tunnel to goblin kitchen but run past it. Keep following it until you reach some stairs, which you'll need to climb. A cutscene will ensue.

Once the cut scene is finished, head upstairs and talk to the Professor. Use the telescope to see your character's star sign. If you're not sure what it is, downstairs are some star charts you can refer to. Talk to the Professor one more time, and if you get your star sign correct, quest complete! 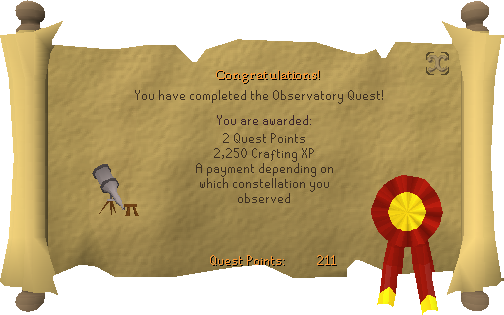 Your item reward depends on what Astrological Sign you see when you look through the Telescope and it is also different for each person. 2,350 Crafting experience