Begin by speaking to the King of Varrock about a quest.

Firstly, talk to King Roald in Varrock about a quest. He says that he needs your help to find his friend Drezel, a monk in the Monastery to the east. Tell him you will find out what has happened, and then leave through the eastern exit of Varrock. 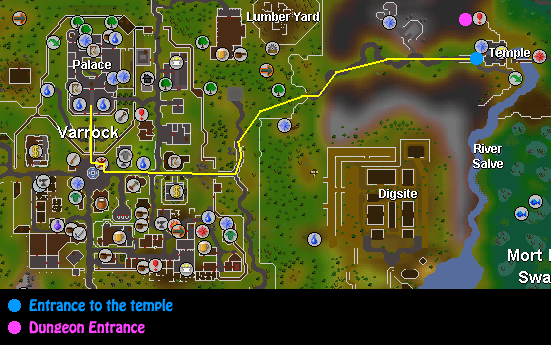 Once you reach the eastern exit go north, following the road, and then head east until you reach a gate. Open it and keep following the road until you find the Temple. Now knock on the door, and when the voice answers, say that the king has sent you to find out about Drezel. Someone then tells you to kill a "dog," so head north, down a trap door. Attack level 48 Cerberus and kill him. 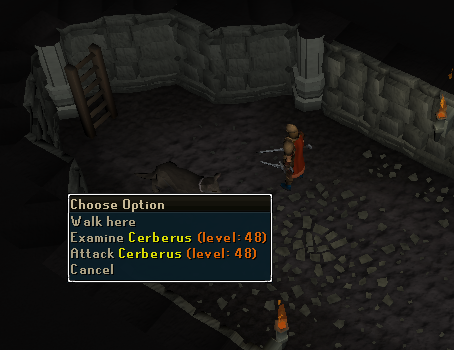 Knock on the door again, speak to the unknown person and then go back to King Roald. He gets extremely angry at you and says some mean things, and you learn that the so-called "dog" that you killed was protecting the route to Morytania, and you were tricked into killing it.

Go back to the Temple and knock on the door. Once inside, climb to the third floor, and then right-click on the cell door, "Talk Through Cell Door." Listen to Drezel's long story about the River being blessed by Saradomin, and then agree to help him.

Go downstairs and kill the level 34 Monks of Zamorak until you get a Golden Key. Now, go back outside, down the trap door where the Temple Guardian was found, and through the previously locked gate. You will find a room filled with a circle of Monuments. Study the monuments until you find one that says "Saradomin is the key that unlocks the mysteries of life," and use the key with it to get an Iron Key. Use this to unlock the cell door. 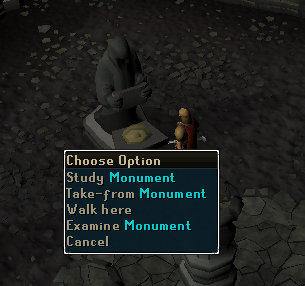 Now go inside and speak to Drezel, who says that you could get some water from the river. Head back down the ladder, out of the church and down the trap door, through the gate and into the room with monuments. In the very center of the circle is a Well, which you can use the bucket with to get some water. Bring it to Drezel who blesses it, and then use it with the Vampyre's Coffin in the room.

Speak to Drezel in the cell and he will tell you to meet him in the underground temple. Head down to the area where you obtained the Salve River water and again speak to Drezel. He says that he needs 50 Rune Essence or 25 Pure Essence to undo the damage. Remember you cannot use noted essence, two trips to bank/mine/GE are needed if you wish to go the Rune Essence route. After giving him the 25th or 50th piece, you're finished with the quest! 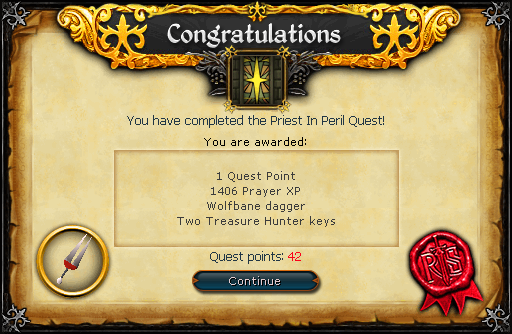