Quiet Before the Swarm

To begin this quest, speak to Sir Tiffy in Falador Park and ask him about the Void Knights. He will then brief you about what you have to do.

After this, head off to the Void Knight Outpost, and speak to Commodore Matthias. He is located in the house to the northeast of the Island.

Once there, speak with him about the pest that has been seen around Falador. Then he will exclaim that "No one under my command would let a pest escape.", before letting you investigate.

After this, head towards Captain Tyr to discuss the investigation with him; he is located just south of Commodore Matthias's house. He will then tell you to talk to the 9 people on the half of the Island that you are on. The people you need to talk to are:

After speaking with everyone, your character will seem relieved and will then suggest that you go and talk to Captain Tyr again.

He will ask you how the investigation is going, and you will then summarize everything that you have heard from the people you spoke with. He will tell you that you should think about all of the people that you have spoken with, and figure out who has access to the pests and the motive to release one into Falador, then confront them about it and see what they have to say. Then you should report back to Commodore Matthias.

Confront Jessika about the crime. She will act suspicious from the moment you talk to her, and she will jump on the high horse and defend herself. Before letting a little something slip, and argue that instead of letting it escape, she was "freeing" it. Go back to Captain Tyr and tell him about your suspicion, and he will agree with you.

Now go back to Commodore Matthias, and you will tell him about your breakthrough. He will seem reluctant to believe you, because he thinks she's a shy quiet girl. But because Captain Tyr also has suspicions. He will then go and speak to her, entering a cut-scene. He will say that he is going to give her a potion that will let someone enter her mind. Of course, you are the one that will have to do so. Answer him "Yes" when he asks you if you would enter her mind.

You will now unlock a new music track and be in her mind, from which she is trying to block you out. In the middle of this room, you will see some memory blocks, which you must put back together by moving them into place. 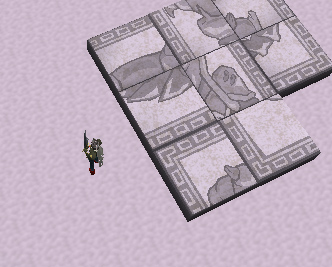 Solving this puzzle is very easy. You have to align the outside edges so that you have a missing space in the middle. You will know that the puzzle is finished when the middle piece appears and Jessika starts talking. 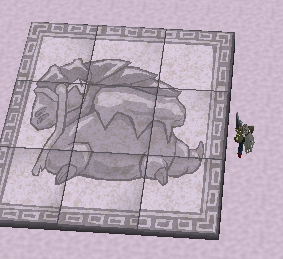 Jessika will then confess everything. She says that she hopes he made it to the mainland okay as he is weak. You will then appear back at the outpost and Commodore Matthias will ask you what you have found out. You will apologies to him, and tell him that she did release a pest into the mainland's. People will try to argue her case, as they find it impossible that she could have done such a thing.

She will get sentenced to house arrest until other arrangements can be made. She then argues that the pest wouldn't hurt anyone as it is intelligent and has feelings, leaving Commodore Matthias to get angry with her. She then gets taken away and Commodore Matthias will apologize to you about not cooperating with you and will say he is grateful for your work. Captain Tyr will now fetch the best knights and they will discuss what to do next before any more damage is done. They will then give suggestions of how to track down the pest, he will then assign a team to track it down, and send you back to inform Sir Tiffy of the recent events.

Now go back to Falador and talk to Sir Tiffy. You will then tell him about what's going on and about meeting them at the Port Sarim docks, the screen will now go black and you will find yourself at the docks, but only Commander Korasi will be there.

She will be dazed and reply with nothing helpful. Sir Tiffy will ask a Squire if he saw anything, and he will tell you that she just appeared there, as if teleported by something. You will then learn that no Void Knight ships have docked that day. Korasi will then ask where she is. Sir Tiffy will contact Savant and ask her to send in Lady Table. You will then appear at Falador Park once more and you will learn that she is safe. You will ask to see her and Sir Tiffy will let you as long as you put everything you are carrying in your bank, as the HQ is a secure area. Once deposited, return back to Sir Tiffy, who will now take you to the HQ.

Now speak to Korasi and ask her what happened, she will reply that she doesn't know, and that she set sail from the Island, then found herself at the docs. She will say she wasn't wet so she didn't swim and she isn't very good at magic either so she couldn't of teleported there. Sir Tiffy will say that her memory's are locked away, so you will then have the idea to access her memory's like you did earlier with Jessika's memory's, and thankfully, Korasi will still have the potion on her.

You will now find yourself in her mind, with Void Knight ghosts and monsters from the Pest Control Activity around the area. 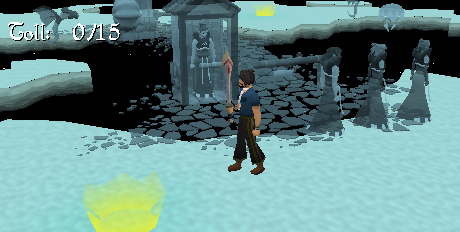 Speak to the Toll Booth, ask about what you need to do. You will then see a message telling you about the rules of this puzzle.

The way to solve this is as follows, if at any point you get it wrong, you can reset by talking to the toll booth, (Please note, the knights weights will be different for everyone):

You will now appear with all of the Knights beside a boat.

When you have got it right, you will unlock a new music track and find yourself as Korasi in the ship. A pest will then start to attack you and you will have to kill it. You will appear to be wearing full Adamant under your Void Robes. 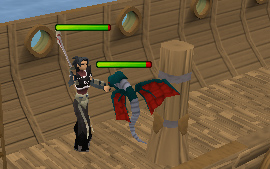 Next, climb up the ladder and there will be a few more of the pests to kill, and the other Void Knight members will be helping. After the last pest is dead, all of the Knights will die, and you will be left alone.

You will start searching for the Commodore, finding him with some shady figure attacking him, who will tell you to go away and get to shore, before getting teleported then waking up in the HQ.

Now talk to Korasi about what you saw in her mind, and she will remember everything. You will then be asked to face the pest. You will agree to do this. Sir Tiffy will send the White Knights out to find the lost pest. You will now need to go back to the Void Knight Island and inform, now Commodore Tyr. Leave through the door and head back off to the outpost. Once you have informed of this... 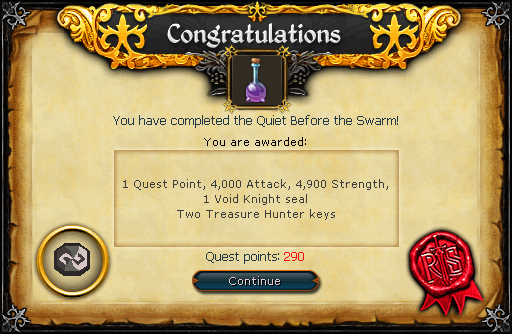 4,000 Attack experience 4,900 Strength experience 1 Void Knight Seal, when used in the Pest Control game, will damage everything around you.