Begin by reading a letter given to you by a Messenger.

Once you have completed the Underground Pass Quest, at some point a Messenger will appear and give you a letter.

Read it and speak to King Lathas in Ardougne. He will tell you that the way to the realm of the Elves is now open, and you must go through the Underground Pass to get there. Head to the pass, which is located in the cave near Koftik in the western-most part of West Ardougne.

Once inside of the cave, you should see 3 paths. Don't take the middle one! Climb the rockslides to the north, and then you should see Koftik near a campfire. Take a few cloths from him and use them on your arrows, and then use the arrows on the fire to get Fire Arrows. Head north and shoot the rope holding the bridge up.

Cross the bridge and head west. Follow the cave south, then east until you reach a chasm. On one side is a Swinging Rope, and the other has two spikes in the floor. Use your Rope with the spikes. When the Rope catches, you will walk across to the other side.

Warning: If your inventory is too full and you must drop an item to equip your bow, you will be unable to pick up the item you dropped. Do not drop anything of value here!

After that, run through the hidden spikes corridor, climb down the well, and walk west to the jail cells. Enter the southern cell, and use your Spade on the Mud Pile and then cross the ledge. You can either try crossing the bridges, or you could pick the lock on the gate to the south and east (requires 50 Thieving), then pick the lock on the next gate to the east. Turn south, then west, and then "squeeze-through" the Obstacle Pipe. You will now be in the room containing a Unicorn in a cage.

Leave the room by passing through the tunnel. Continue north going past the spear walls and the Zombies. Go past Sir Harry, Sir Carl, and Sir Jerro without speaking to them until you get to the flat rock and the stalagmites. You may search the flat rock but eventually use your plank with a flat rock and you will cross over safely. Continue west past the well and open the door.

Head to Iban's Chamber where you defeated him before, go inside and then speak to Koftik, who may give you food. Then enter the Well of Voyage! Proceed out of the cave or recharge your Prayer and then continue.

Land of the Elves

Now that you're through the pass, you'll be in the Elves' Realm, which is in the west-most part of RuneScape. 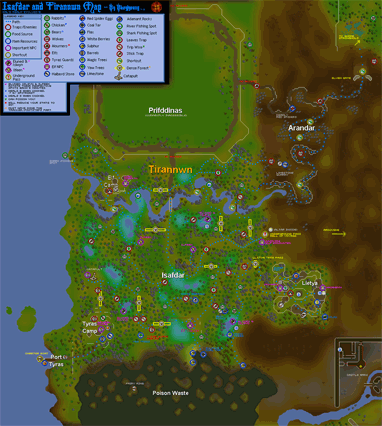 Shortly after leaving the pass, you'll be greeted by an Elf, but he will get shot down by 2 others. They will tell you that Lord Iowerth is expecting you in his camp to the northwest. Remember, the lands may look peaceful, but they're full of traps, so watch your step! The map above will show you which trail to take to the camp. 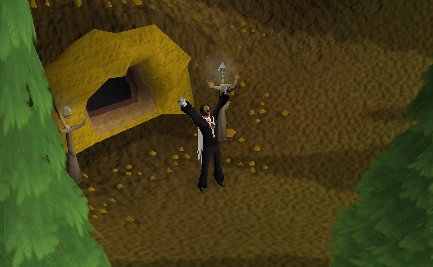 There are 3 main kinds of traps you may come across:

Once you've found your way to the Elf Camp, speak with Lord Iowerth. He wants you to find his Tracker in the lands to the south. Head south until you find the Tracker, who thinks that you're one of Tyras' men. Go back to Iowerth to get a pendant to show to the Tracker again. He will tell you that Tyras' men have moved, and that you'll need to search for footprints to the west. While you are here, activate the lodestone so it will be easy to get back to Isafdar. 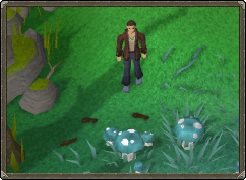 Once you've searched them, return to the Tracker who will tell you how to find your way throught Dense Forests. You are now able to pass through them. Cross through the nearby Dense Forest and you'll be attacked by Tyras' (level 84) Guard. Kill him and proceed, but be sure to watch out for Trip Wires! 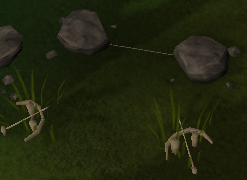 Carefully walk to Tyras' Camp and speak to General Hining. Pick up as many Barrels as you can hold, and then head back to the Tracker.

Talk with him, and while you're there, use all your Barrels with the swamp to the south to get some Coal-Tar Barrels, and then take some Sulphur and crush it with your Pestle. Go back to Lord Iowerth, and he will give you a Book O' Bangs with steps to making an explosive. Read the book to learn how to make explosives:

Note: Coal-Tar Barrels are quite heavy, so running with them in your inventory will drain your Run energy quickly.

Be sure to have your Coal-Tar Barrels. South of Tyras's camp is a ship you can charter for 1,600gp. Chartering it will also allow you charter it back from another point, allowing you to skip taking the Underground Pass again. If you can't afford the charter you can just teleport.

Bank everything then withdraw lots of Coal, the Coal-Tar Barrels, Quicklime and your Book O' Bangs and head to the Chemist in Rimmington.

Talk to the Chemist and then pour the Coal Tar into the Distiller outside. Put some Coal inside and the heat will increase. When the heat level turns green, turn the right valve on. If the pressure goes over the green level, turn the left valve on. Don't let the pressure get too low, so be sure to close the valve when it goes below the green level. Do this until the Coal-Tar is distilled (the bar is completely green). Now add the ground Sulphur and Quicklime, and now you have a Barrel-O-Boom!

Take out four balls of wool from the bank in Falador and use them on the loom north of Port Sarim to receive a cloth. Use the cloth on your bomb barrel.

Bring some food, your Bomb Barrel, Antipoison potions, Tinderbox, a cooked rabbit and 3,200gp for a Charter Ship if you plan on taking one. If you take the Underground Pass route, you will again need a Bow and Arrows, Spade, Rope, and a Plank. You don't need any armor here. Charter a ship, teleport to the Tirannwn lodestone, or use the Underground Pass again. If you do not already have a cooked rabbit, you can kill one and cook it in the surrounding forests. Go to the Catapult near Tyras' Camp, talk with the Guard and give him some Cooked Rabbit. Quickly use the barrel bomb on the Catapult and Tyras' Camp will be destroyed! 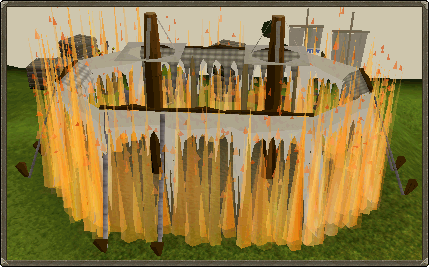 Go into the camp and try to enter Tyras' ex-tent. The guards are all saying that he's dead, and that they must prepare for the oncoming darkness. Talk to the Tracker on your way out, and then go back to Lord Iowerth to give him the news. He gives you a Scroll and access to the Arandar Gates leading to the Gnome Stronghold! Head back to the king by either teleporting or taking the gates.

Once at King Lathas' gates, you'll have a visit from an Elf. A surprise shocking message you're carrying. After speaking to her, speak to Lathas. Quest Complete! 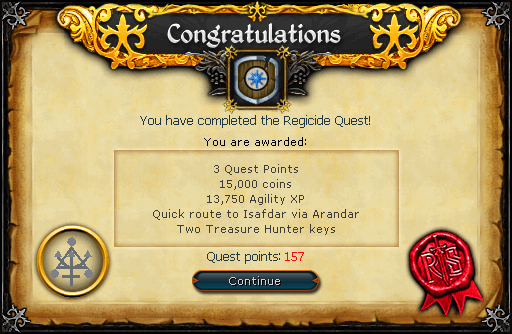 15,000gp 13,750 Agility experience Ability to pass through the Arandar Gates to Isafdar. Ability to buy (and wield) Dragon Halberds from Tyras' Camp. Charter Ships will now take you to Port Tyras.