Salt in the Wound

By: Twist of Fate
Special Thanks to: Hunter, Samsara, Sythe

Talk to Kennith on the Daemonheim Peninsula.

You can start this quest by speaking with Kennith on the Daemonheim peninsula. He's located by Sonje and a Fremennik shipbuilder on the far east side. Upon talking to him, he will express how glad he is to see you. Ask him how things are going in Witchaven and he will tell you that he and Bailey need help on the Fishing Platform. It turns out that Kennith and Bailey were both asked by Sir Tiffy Cashien to help kill the slug queen. He will ask you for help, which you graciously accept. He'll ask you to meet him somewhere private and then teleport away. Find him by walking up the stairs to the west and going slightly north.

Upon talking to him somewhere more private, he will express his feelings to get other people involved in this quest. Ezekial from the Kennith's Concerns quest, and Eva the Niece of Sir Tiffy will be teleported in. Talk to Kennith about the queen until his knowledge is used up and he directs you towards Eva. When asking her why the group is in Daemonheim, she will tell you of a creature that can defeat the queen's mind control. This creature will be used as a weapon against the queen. Talk to her to get into the dungeon.

Ezekial will throw a bomb at the side of the cave, resulting in a humorous cutscene, and you will end up in the dungeon. 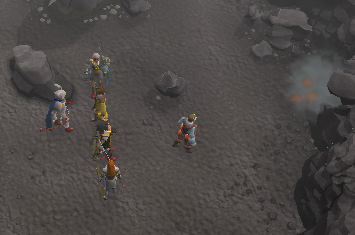 Your first mission in the dungeon will be to find the blue key to unlock the puzzle room. To get into the key room, you will have to encounter some monsters. The three monsters are medium leveled and should not cause a problem. The blue key is on the floor to the east, retrieve it from here. After retrieving the blue key, walk west to the first room and use the blue key you just obtained on the door to the south.

Enter the room to find a Caustic Gazer standing in front of a typical Dungeoneering puzzle. Choose a hero to use to get to the other side. Using the one with the most health is a good idea. Your character will distract, or "Tank", the Caustic Gazer while the chosen hero must jump the gaps to the other side without coming within one square of the Guardian Sphere.

A good way of solving the puzzle is to follow this picture: 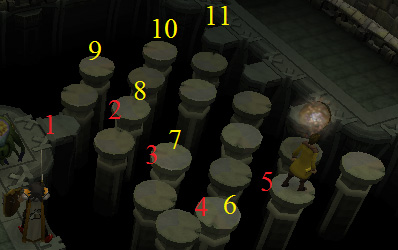 Once the hero you chose is on the other side, click on the Seeker of Truth to inspect it and return the chosen hero across the gap. An easy way to get a character back across the puzzle is to simply have the Guardian Sphere come in contact with the chosen character. If the character dies, simply reenter the dungeon and talk to Kennith for a teleport. After the puzzle is completed, Kennith will ask if you are ready go to the Fishing Platform. Say that you are and teleport to the fishing platform. 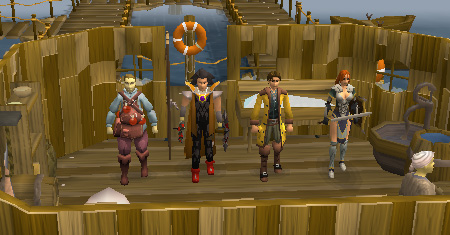 Talk to Kennith once the group arrives at the Fishing Platform and he will tell you to get a couple more ingredients for an anti-mind control potion. He tells you that you need a live specimen for the potion. To get a sea slug head east on the platform to the fishing spot. Lure the fishing spot and a slug will jump up on the boards. DO NOT try to simply take the slug, as this will damage you for 30 life points. Instead, start walking back to Kennith and the slug will follow you. Kennith will daze and telegrab the slug for you.

Next he says you will need some blood, given freely. To get the blood you simply punch Bailey and then say "So you don't feel pain?". Then say "No pain? Prove it." Bailey will then take a shard of glass and cut his arm to prove that he can no longer feel pain. Talk to Kennith and he will tell you that you have all of the ingredients and you'll receive the seeker gland. Pick up the pestle and mortar on the floor in the room and use it on any piece of the potion to make the anti-mind control serum. 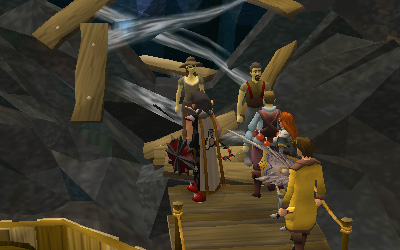 Meet up with the group outside and to the west of the building you were just in. Talk to one of the Slug thralls and ask why you can't enter. They will tell you that no stranger may enter, to which you reply "I'm not a stranger" followed by "I seek enlightenment in the joining" and finally " I wish to hear..." and the guards will let you enter. If you log out or leave during any time in the cave, you will have to start again from the cave entrance. However, previously completed puzzle doors will be kept open.

The Slug Citadel is made up of a series of rooms. You and your party of adventurers will have to adventure though the rooms by solving puzzles. The rooms have a varying number of Risen Knights. Some must be killed and some can be avoided. The members of your party will be healed to full health automatically when you move on to the next room. You will need to bring some food with you because your character is not healed. The rooms will remain unlocked after you've completed them.

Just like in the puzzle room, click on a character to give them their commands. Leave one party member by the Witchaven villager just north of the entrance and move the remaining 3 to the metal gate to the northeast. Knock out the Witchaven villager and proceed south with your character into a room with a lever and pull it. The metal door to the north will now be open, send a character through and pull the lever. Now knock out the villager again and bring your character north to the again closed metal gate. Pull the north lever and bring your party through. Kill the Risen Knights and continue through the dungeon. Finally, exit through the cave to go to the second room. 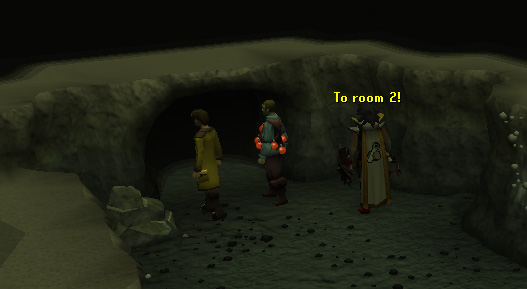 It doesn't matter which character you send to do either job, but they are named in the guide to help keep track of them. Send everyone to the north as far as they can go while avoiding the villager. Send your character and Kennith to the room to the east by pulling the lever. The instructions from here are: 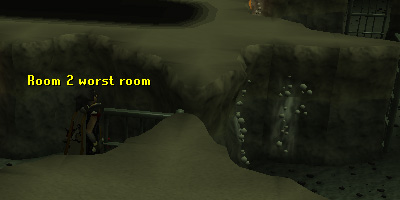 The third room is simple. First kill all of the Risen Knights to make the room easier, and then send a character to each corner and pull the levers. 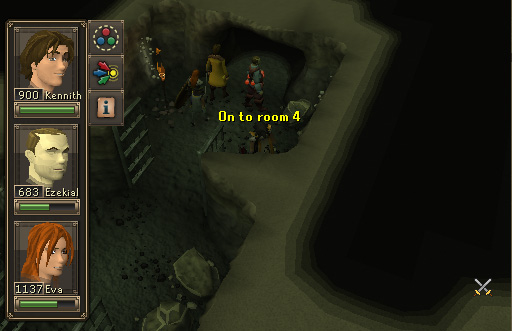 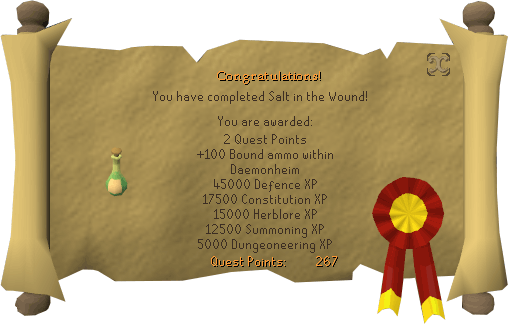