To start, you must speak to Captain Undak, who can be found northeast of Dorgesh-Kaan's marketplace.

Ask him if you can help with anything, and after chatting with him for a while, he'll say that you need to help him protect the goblins from H.A.M. members. Accept his offer to go to the nursery, which can be found by going upstairs and entering the building nearby. Once there speak to Mernik.

Go outside and talk to Torzek, and try to calm her down. Ask her some questions until she tells you that each of the children had a different meal. Each child had two different meals.

Ask the kids inside the nursery what they ate yesterday. The possible types of food are: Wall beast fingers, Crispy frog legs, Frogspawn gumbo, Green gloop soup, Frogburger, and Bat shish. Anything eaten by the kids inside can't be poisoned, so after asking all of them you'll know which two foods were poisoned. Tell Captain Undak that you know which foods are poisoned and he will tell you that you need to find out which food vendors are using poisoned ingredients.

Go downstairs to the marketplace; talk to the vendors of the food you think is poisoned, and ask them about their merchants. Find out which merchant they have in common, that's your man!

Note: Before proceeding, you may want to take equipment for a battle with a Food Seller, level 50.

Find said merchant (it varies from person to person, but all of them can be found south of your current location) and talk with him, choose the option that says: "This is the one, Captain". You'll have to confirm, do so since if you are wrong, you will have to pay 5,000gp compensation. If you've got the right man a cutscene will appear, after it choose the option to attack him. In the middle of the battle, the merchant will pray and Zanik will arrive to help you out. When you're about to kill him, the captain will stop you.

After this, you'll have a chat with Zanik about what happened to her.

You will take Zanik's place (she can be controlled in the same way you would control your character) in her story. Jump to the Goblin Statue that is next to an "Ork Statue" and a "Statue". Keep jumping until you make it to the statue holding a bowl. A cutscene will appear.

Keep jumping until you make it to the ledge and pick up the crossbow (which has a built-in grapple).

Click on the spear nearby to use your crossbow to grapple on it and make it to the throne. Pick up the pendant that can be found there. Jump down and look into the bowl to trigger a cutscene. Walk to the west side of the room and the statues will move to let you pass through. Enter the portal at the west end. Your ability to control Zanik has ended. 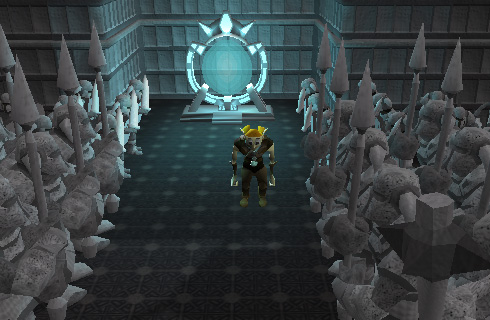 You will find yourself talking with Zanik, agree to go to speak with the council. Now walk to the very north of Dorgesh-Kaan and climb the staircase to trigger a cutscene. 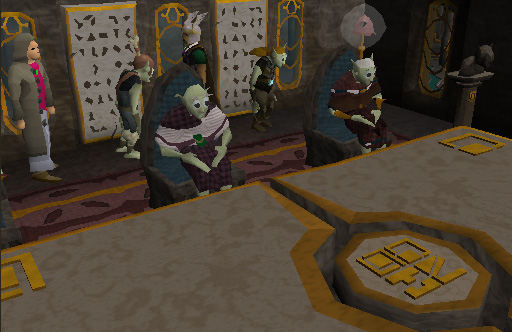 After you go through the dialogue, Zanik will disappear. Agree to help find her; you will need a light source. Now walk south to the Agility course and go down the stairs. Go to the southwest of the cave and Zanik will be there.

Talk with her and choose the option to sit down, then say nothing. Keep saying nothing until she talks with you. Then go through the dialogue until she agrees to go back to the council. She'll be sentenced to being banished from the city. Talk with her again and then talk with Captain Undak. Ask him about his next task, and you'll receive a set of H.A.M. robes to infiltrate into their base and find their next target.

Make it to Lumbridge (by either casting one of the Teleport Spells or by exiting the city, and talking to the goblin at the mines' exit, who will take you to the cellar). Then walk to the H.A.M. hideout by following the next map: 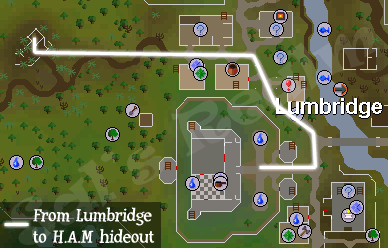 Talk with Johanhus Ulsbrecht who will tell you the location of Sigmund's H.A.M. base.

Note: Before proceeding, you may want to take food, a weapon, and prayer potions. A fight with Sigmund (level 75) and Zanik (level 75, must be fought several times) is coming soon.

Teleport or walk to Ardougne and go to the windmill just south of the Fishing Guild. Without removing your H.A.M. clothes, talk Milton the Miller and tell him the password. Now go down the just-revealed ladder. 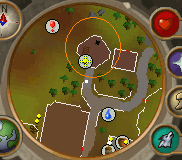 Open the southeastern door in the main room and go through it. Talk to the guard near the cell until he tells you what day it is. Look at the notice board nearby and see which guard's turn it is. Go back to the main room and pickpocket that guard.

If you talk to Sigmund he'll recognize you and kick you out of the base, appearing in a field to the south-east. This may also happen if any of the guards catch you when you are helping the goblin.

Enter the southwestern door in the next room, crawl through the hole, and open both doors from the inside to unlock them.

Go back to the guard and give him the letter. Go through the door and take the key from the floor. Grubfoot is locked in a cell; unlock the cell door with the key, go in and talk to him. Tell him you'll get him out of there, also tell him to wait until you distract the guard.

Move to the north of the guard, then talk to him to distract him, soon Grubfoot should be in the next room. 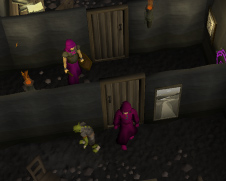 Now tell him to wait at the west door whilst you distract the guard. Crawl through the hole in the wall and you'll break some dishes. You may also use the door and click on the dishes to break them. Wait until the guard comes so that Grubfoot has time to move on.

Head to Grubfoot's room and tell him to follow you. Head out of the eastern door, making your way towards the double doors to the north. A guard will catch you, but keep walking anyway. When you come out of the room Sigmund will appear, attack him. Soon Zanik will come to aid you in battle.

She will throw the pendant and a goblin will take it, turning it into the Bandos Avatar.

Zanik will try to teleport you and herself back to Dorgesh-Kaan, but her teleport will fail and you will be somewhere near said place.

Walk a bit west and some rocks will fall, separating you from Zanik. Talk through the rocks and then clear the path. Talk with Zanik again and tell her you'll give her directions on where to direct her grapple.

Do so and soon she will be with you. Go west to the cave exit and head North to talk with Juna, and you'll have a talk about Zanik's destiny. Keep heading north until you make it to Dorgesh-Kaan. Talk with the goblin near Lumbridge Cellar to get walked to Dorgesh-Kaan.

Go to the center of the Marketplace to meet with the captain again. 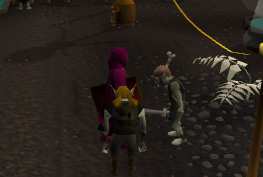 He will tell you that a problem has happened in the city and that you should go to the council to hear more about it.

Go back to the council and talk with the Scribe, agree to help him. Head to the center of the town where the obelisk is, then head east and then north through a passageway to find Tegdak, who will give you a box of artefacts for the time capsule.

Head to the northwestern part of the city, where you'll find Oldak, the sphere seller. Talk with him and agree to help him. Head to the agility course, but instead of going down the stairs as before, go east.

Talk with the goblin there to get the Focusing Chamber and the Energy Projectors, then go back to Oldak who can now be found in the southeastern tip of the marketplace, where Zanik arrived from the portal. Give him the parts and he'll attach them to Zanik's Crossbow. Now give her the crossbow, and she will tell you to go to the nursery, and talk to Mernik; do so.

She will tell you to talk to the Ambassador Alvijar, who can be found just north of you. He will refuse your offer to take the children, go back to Mernik and talk with her.

Note: A fight against a level 125 Bandos Avatar (who uses Magic and Melee attacks) and other monsters (level 50-75) is coming. You may want to take prayer potions, food, and armour.

Return to Zanik and accept her offer to be teleported.

You will be in the throne room again, but now the Bandos Avatar will be there. Talk with him and a fight will start. Get his health near to killing him and then tell Zanik to use her crossbow's special attack, she will be killed before she can do it. The avatar will summon several Orks (level 75), which you must kill to be able to pick up the broken crossbow. 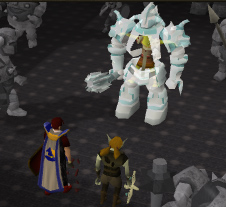 Get out of the room by going through the portal, and a cutscene with you and Zanik being congratulated will appear. 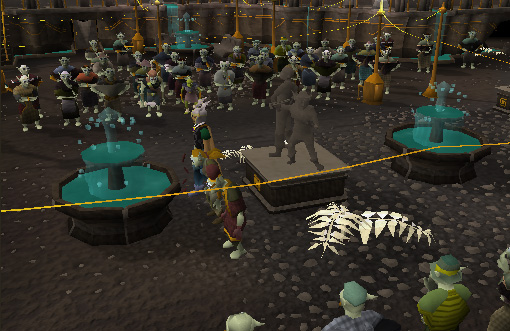 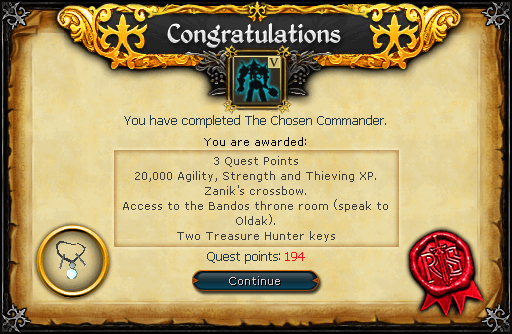 After the quest, the Throne Room serves as an agility course, you can jump on the statues and grapple to the throne for Agility XP. The agility course gives a total of 380 XP if successfully completed. However, you can slip and fall from the statues, which does a fair amount of damage. Each individual statue gives only 2-4 xp.

In this room you can also kill the statues, which drop different types of maces and gems, including the Granite mace. Other possible drops are mystic earth staves and earth talismans.

It is a one-handed crush weapon which is able to train Attack, Strength and Defence. It is a common drop from the monsters in the Bandos Throne Room and alchs for 30,000gp. There are two ways to access the Throne Room: 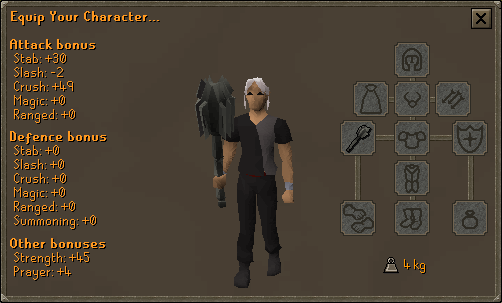 You may keep Zanik's Crossbow after the fight, it is an improved version of the Bone Crossbow, and also uses Bone Bolts. It has a special attack, which hits higher on opponents that are using prayer. 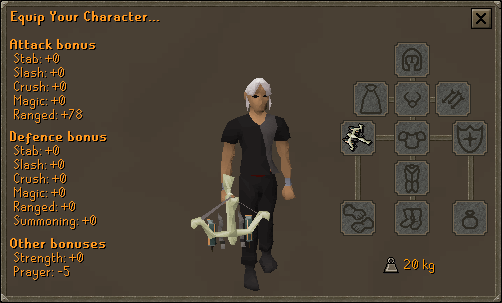