A old book, previously unnoticed, has been discovered by Thormac the Sorceror. Since it has to do with the Elemental Workshop, he thinks you might be interested in reading it!

Thormac at the Sorcerer's Tower recently discovered a book in his collection that he didn't recognise, all about the fabled Elemental Workshop. As he'd heard that this was something you're researching, and he's more 'mystic' and this book's all 'cosmic', he'd love for you to pop by to pick it up.

Search the bookcase on the ground floor of the Sorcerer's Tower south of Seer's Village. 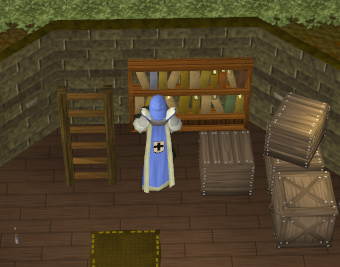 Search the bookcase on the ground floor of the Sorcerer's Tower. You'll find a Notched Book which will start the quest. After you read it, go to the building next to the bank in Seer's Village, and use a Knife on the whetstone to create a Keyblade. Next, go to the bottom floor of the workshop and use the Keyblade on the locked door. 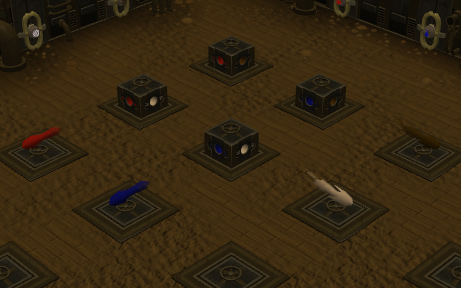 You'll find a few new rooms within this new area of the workshop. Start off by opening the Cosmic Door. Head over to the South-Eastern part of the room, and operate the control panel. On the west and north side of the room are rune emitters. They hold one type of rune, which you can switch out, and when you operate the control panel you can have it shoot out a blast from the rune. You need to have the color of the pillars match up along with the emitter to blast the rune type through to the other side. Each pillar allows different types of runes to go through, such as fire/air, and water/earth. You may rotate the pillars through operating the control panel. When you have everything set up, power up the control panel to shoot the runes. If the puzzle is set up correctly, the runes will shoot through the pillars, and then set up the next puzzle. There will be three puzzles to solve. The first will be 2x2, the second will be 3x3, and the third will be 4x4. The best way to solve the puzzle is to just solve each line at a time, and adjust the emitters to complete the puzzle. 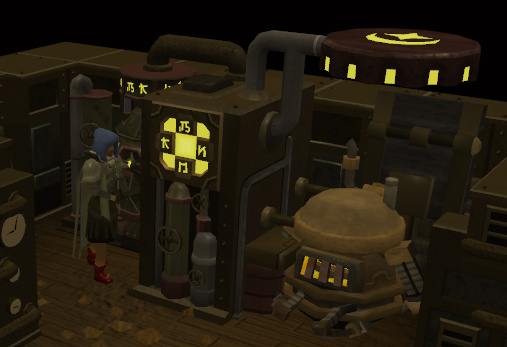 Once you've solved all the puzzles, the cosmic machine will power up. Operate the Draining Machine, which will trigger a cut scene. Davi the Automaton will go and open up the Chaos Door. Before proceeding into the Chaos Room, use a primed bar on the machine, and then operate the Draining Machine to receive a Cosmic Bar (if you need to make a Primed Bar, refer to the Elemental Workshop II quest guide). Now go back to the top level of the workshop, and use the Cosmic Bar on an anvil to create a pair of Cosmic Gloves, you will need these later. 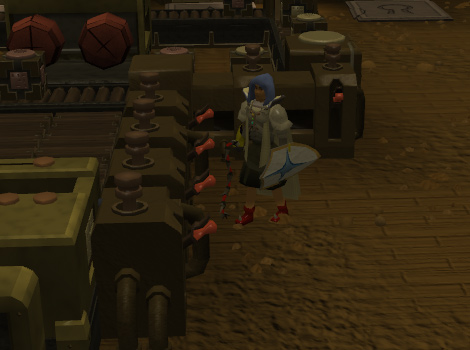 Head to the west side of the Chaos Room and pick up the Shabby Book. After you read it, go to the South-Eastern side of the room to the levers. The four levers lined up will operate the conveyor belt (the one to the very north will move the conveyor belt clockwise 5 times, the next one moves it 1 time clockwise, then 1 step counterclockwise, then 5 steps counterclockwise) and the two lined up levers will operate the RAM. For this puzzle you will have to operate the Automaton. To operate him you move the blocks onto the conveyor belt in front of the RAM then have them pushed into the CPU to give orders to the Automaton. You can give the orders give, put, break and operate.

The first thing you need to do is fix the broken Astral Token. To do this you'll have to break open the temporary wall which is in front of the Fire Token. You will also have to retrieve the Address Cubes so that you can give the proper orders to the Automaton. Input the following instructions to do so: 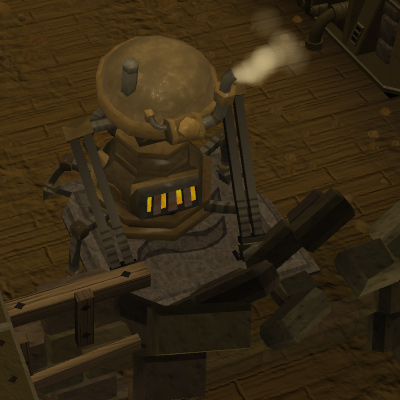 The Automaton will place a blank token on the workbench, once the token is placed on the workbench, carve it, pick it up, and then place it over the broken Astral Token. Now you'll need to break the wall in front of the Earth Token, and then operate the machine. To do so, input the following instructions: 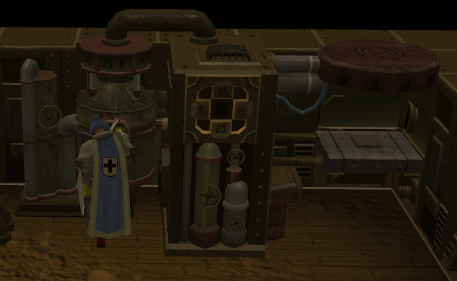 Place a Primed Bar on the machine, and then operate it to receive a Chaos Bar. Take the Chaos Bar upstairs to an anvil and make some Chaos Boots. 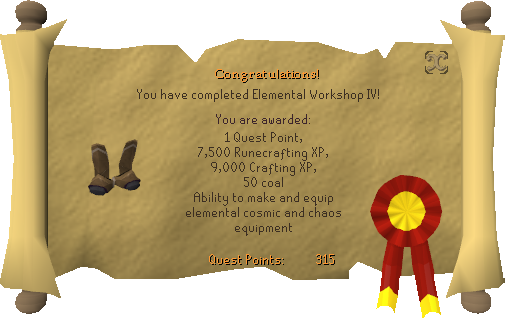 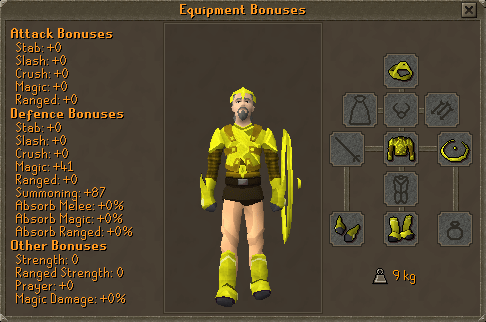 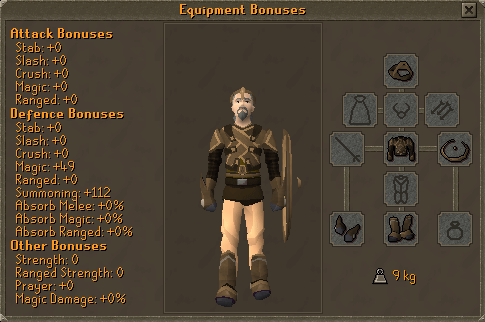