To Begin this Quest, Speak to Dimintheis. He is located in the house in Southeastern Varrock just north of the Fancy Clothes Shop. 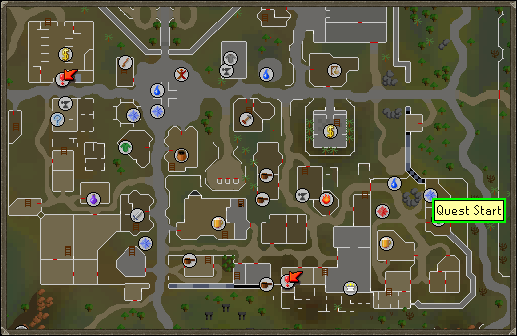 To begin Family Crest, speak with Dimintheis in Southeastern Varrock. He is located in/around the house just north of the Fancy Clothes Shop. Refer to the Map Above. When you mention your status as an adventurer he tells you he may just have an adventure for you. 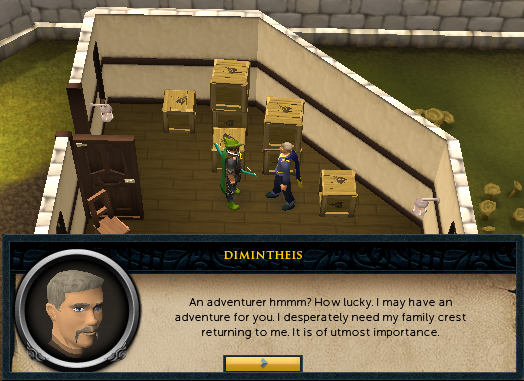 When you ask about the crest, he continues to explain that his 3 sons took it with them to war many years ago. He assumed them dead; however, he recently discovered that one of the sons may be alive west of Varrock. You agree to help him find the son. 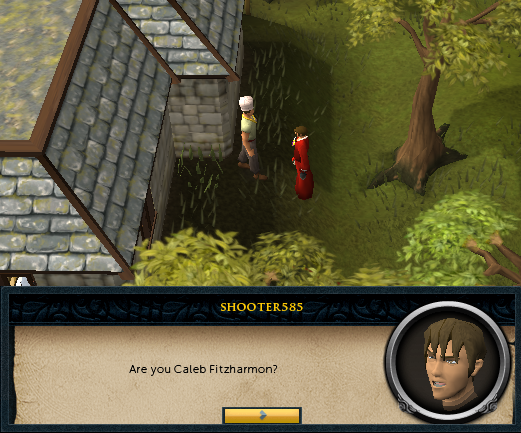 He shows surprise that you know his name. You quickly explain that you've been sent by his father and ask him about the Crest prior mentioned. He explains that he has a piece of it, but not all of it. You further question him and ask what happened to the rest. He sadly explains the disagreement he had with his brother and explains that they each ended up with part of the crest. After he elaborates on the subject, you bluntly ask if you can have the piece.

In response, Caleb explains that as the oldest son he is the most entitled and rightful bearer of the crest; however, after you contradict how useful the crest is without the other fragments Caleb is quick to put his pride aside and ask you to help him find some ingredients in exchange for the crest. Accept the task.

He asks you to get him a Cooked Bass, Tuna, Swordfish, Shrimp, and Salmon. These can all be easily acquired through the Grand Exchange or you can fish them yourself from the Catherby Fishing spots just to the Southeast. Return to him with the fish. You exchange the Fish for the Crest.

After Caleb hands you the crest, talk to him again and he'll tell you about his brother who lives in Al Kharid. Teleport to the Duel Arena in Al Kharid with a Ring of Duelling or use the lodestone. Speak to the Gem Trader. 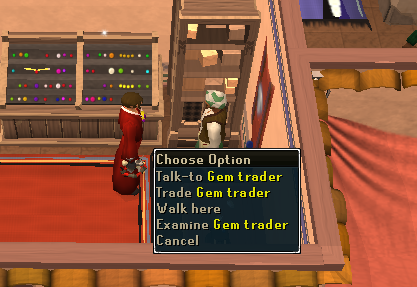 The Gem Trader tells you about a man whom he believes to be Avan can be found hanging around in a Yellow Cape by the Chasm to the North (also known as the Scorpion Mine). Head north to the scorpion mine and speak with Avan, who is wearing a yellow cape. 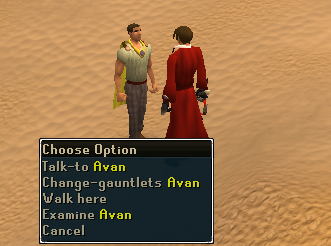 He verifies his identity and you waste no time to explain your quest in the retrieval of the Family Crest. He is quick to deny you access and assumes one of his brothers sent you on the Quest; however, when you explain that his Father sent you, he stumbles and agrees to give you the crest if you do something for him in Return.

He explains his love for a woman and his attempts to impress her with a gift. He asks for a ring with the finest precious red stone available and for a necklace to match it. He asks that these be made of not regular gold, but perfect gold. You ask if he knows where you can find this ore.

He speaks of a dwarf named "Boot", an expert on Gold; however, he seems to have moved back into the mountains. You thank him for the information and agree to look for the Gold. 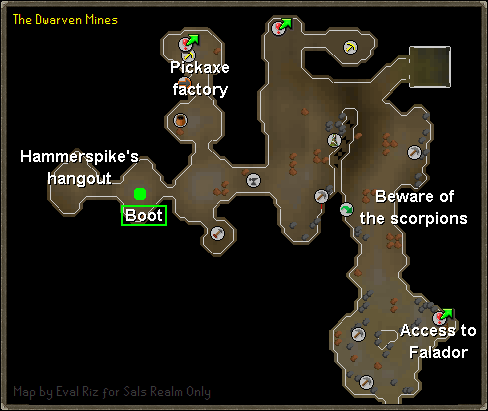 Teleport to Falador and head north to the Dwarven mines. Speak to Boot, found west of the Anvils. He explains that the finest gold is found in a dungeon near Ardougne. He also warns you that it's not easy to get to it, as they are guarded by level 132 Hellhounds. Bring armor. 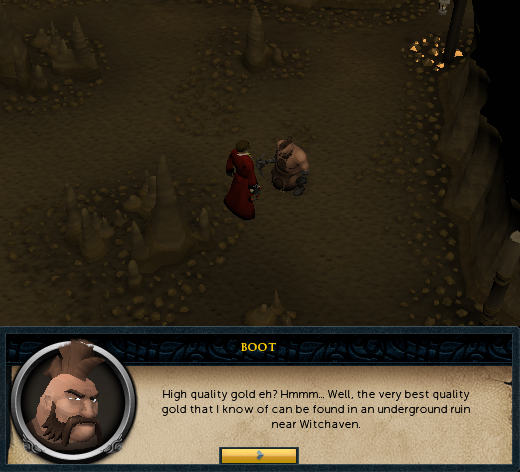 Teleport to Ardougne bank. Head east. Just between Witchaven and Ardougne is the Witchaven Dungeon. Enter. 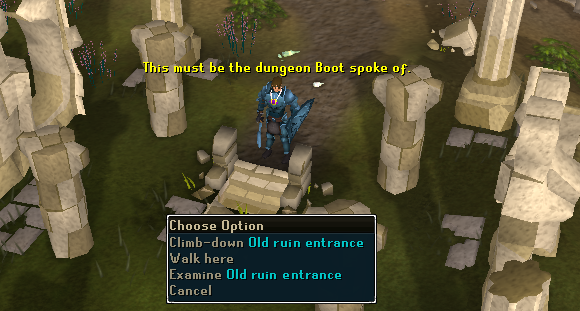 You will be met by Hobgoblins (level-50). To access the ore farther in the dungeon, you'll need to pull a series of levers.

Lever locations are shown on the map below. 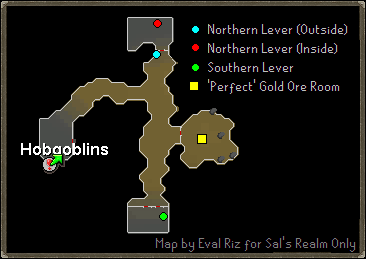 Proceed to the Hellhound Gold Room in the Middle of the Dungeon and to the East. Prepare for Combat. Turn off auto-retaliate and turn on prayers (if applicable). Open the door, mine your two ores, and get out.

Head back to Al Kharid. Use your ores on the furnace to smelt it and then use your bars and rubies to make the Perfect Golden Necklace and Ring. If you do not have the Moulds, you can run just east and buy them from the Crafting Store.Return to Avan with them and receive his part of the crest.

He also tells you about his brother Jonathan, who can be found hunting on the edge of the wilderness and spends more time recuperating instead of anything else.

The final son lives upstairs in the Jolly Boar Inn northeast of Varrock. It's located on the edge of the Wilderness. Talk to him first, but he complains about the poison. Use an anti-poison potion on him. 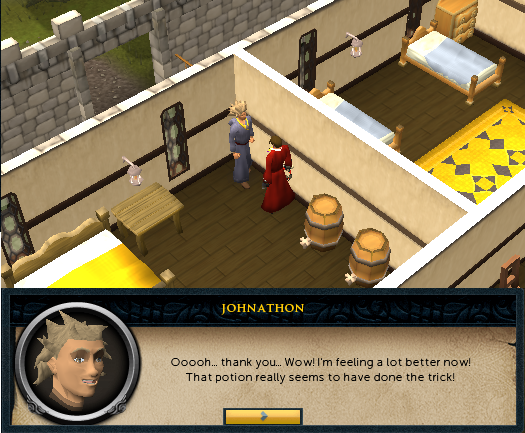 In the ensuing conversation he will tell you that you will need to defeat a demon named Chronozon (level-120) to get his crest piece.

Head to Edgeville and enter the dungeon to the south. Once you are in the dungeon, walk north until the end of the corridor. Then walk west and then north again. You should see Chronozon along with several poisonous spiders. Chronozon is no longer in the Wilderness.

Turn on Protect from melee before entering the room. Be aware of the spiders (they can poison). You must hit him with one wind blast, one water blast, one earth blast, and fire blast. If you would like to kill him entirely using range/mage you can use this safespot. 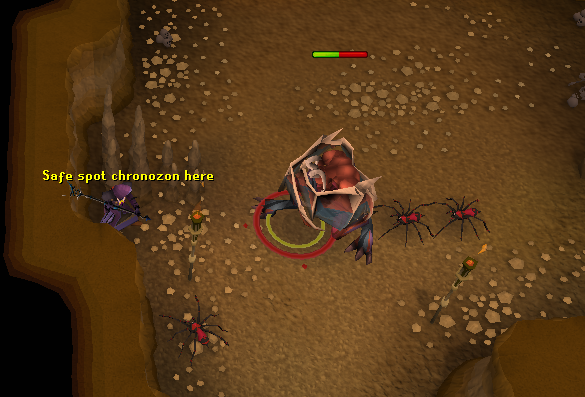 Once he is dead, he will drop the last piece of the Crest.

Use the Crest Pieces with each other to receive the complete Crest. Return this to Dimintheis. Congratulations! Quest Complete. 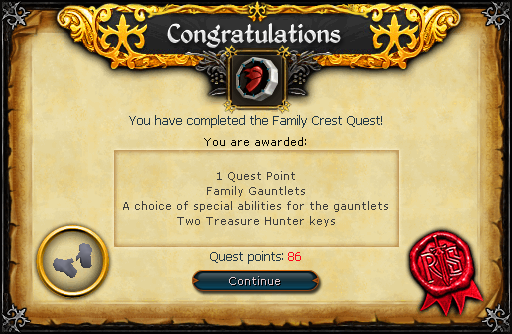 Family Guantlets - can be Enchanted by any of the brothers.

After completing the quest, you have the option of visiting one of the three brothers to have your Family Gauntlets enchanted to give them a special ability:

If enchanted by Avan, you Receive Goldsmith Gauntlets which increase the amount of experience gained while smelting gold.

If enchanted by Calab in Catherby, you Receive Cooking Gauntlets. These gauntlets help you stop burning Lobster, Swordfish, and Shark at an earlier level.

If enchanted by Jonathan, you receive Chaos Gauntlets which improve the four basic chaos rune Spells.