The Void Stares Back

Where are the remaining pest-goo-filled puzzle boxes from the Black Knights' plot to weaken Falador? Who was the mysterious figure responsible for the death of Commodore Matthias? Is the Valluta real or just an old Voids' tale? Infiltrating yet another Black Knight stronghold will set you on the path to answers, but the truth isn't as black and white as you might think. And remember: if you stare into the Void too long, the Void stares back... 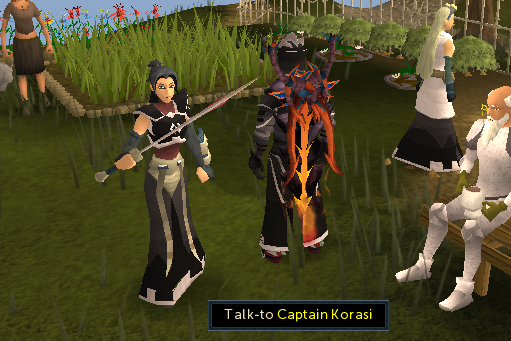 Begin the quest by heading to Falador Park and speaking to Captain Korasi. She will complain that the White Knights' investigations is not getting anywhere and that you need to help with the investigation. She will give you a Black full helm, Black platebody and Black platelegs. All of them are bugged, which means Savant will be able to talk to you and hear everything that you hear.

Note: You might want to get some combat gear and food now, in order to save some time later. Remember you will have to wear the black armour, so adjust for that. 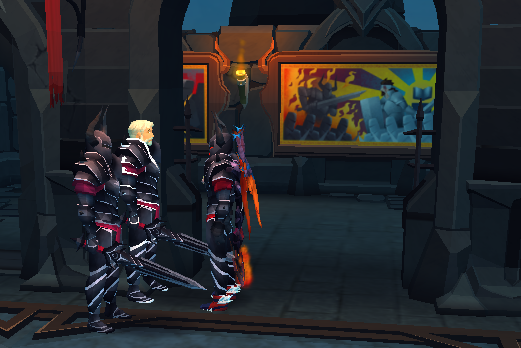 Talk to Captain Gilroy, who is beside you, and you'll be taken into a cutscene with the rest of your team. A black knight will attempt to open a door and will be killed in the process. You will then be given the task of getting through the door. Take from one of the crates and you'll discover that someone has swapped the labels on them. Talk to Captain Gilroy and he'll say he can determine the weights' differences.

Speak to Captain Gilroy again and inform him which weights weigh how much. After this, he'll tell you to correct the scales, and that the password of the day is fifteen in each. The scales you'll need to balance are on the south wall, next to the crates. 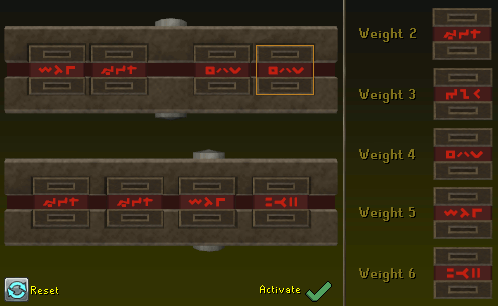 Once you've balanced the scales and the door is unlocked, head on through. Make sure you have combat gear as you're about to be ambushed by a few void pests. Captain Gilroy will fight one, the other black knight will cower away, and you'll be left to fight the remaining four: a Shifter, Brawler, Spinner and Torcher. These may deal a lot of damage, so having Protect from Melee or Deflect Melee is recommended. Attack the Spinner first, so that it won't be able to heal the other creatures. 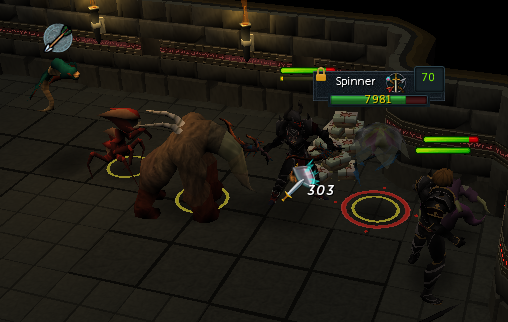 Each time you kill a pest, it will drop a security block. Make sure you pick these up, as they're needed for the next security door. Unfortunately one was broken, so Captain Gilroy tells you to head to the mini-forge to fix it. The mini-forge is in the north west of the black knights' headquarters. It was broken in order to stop counterfeit security blocks being forged, so you're going to have to repair it with a piece of hard leather, a hammer and a limestone brick. You'll also need a tinderbox and logs to light it. The limestone brick is found by searching the crate in the same room as the forge. The logs can be found in some crates in the kitchen, which is located next to the entrance into the headquarters. The room just south of the kitchen holds crates in which you can find a hammer and a tinderbox. The hard leather can be found in a crate just outside the jail cell, which can be found east as you head into the large hall with the round table. Repair the forge, use the logs on it, and then the tinderbox to light it. After that, use the broken security block on it to fix it.

Once you've done all this, head back to the room where you were ambushed and use the security blocks on the slots in the wall that are empty. The door will unlock once you're done. Go through it and on the west wall is a panel you'll need to click. Captain Gilroy will express doubts and you'll be given an option on what to check the panel for. Choose the option to check for magical traps, and you'll disarm the trap. Click on the panels again, and you'll be confronted with another puzzle. The aim of this puzzle is to form a horizontal line spanning all of the three panels. The puzzle will not complete until every block is placed, including the ones that are not needed. The completed puzzle is below: 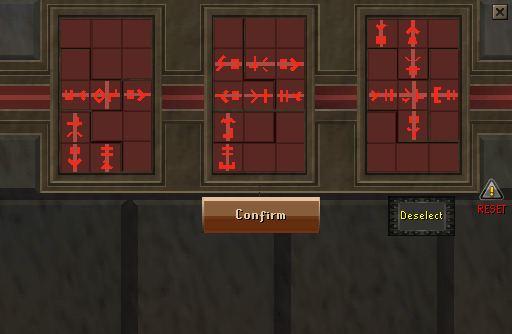 Once you get through the door, you'll find out that all the boxes have been stolen. Captain Gilroy summons Commander Daquarius. Daquarius wants you to remove your helm so he can know your face, as he is quite impressed by your ability to get through all the security. Choose whatever part of the dialog you want, as it is relevant when it comes to getting the reward. Once you get through all that Sir Tiffy, Jessika and Korasi will teleport to you and try reasoning with him. You eventually decide to team up and go through the portal, with a large contingent behind you. Korasi will give you her sword, before you set off. 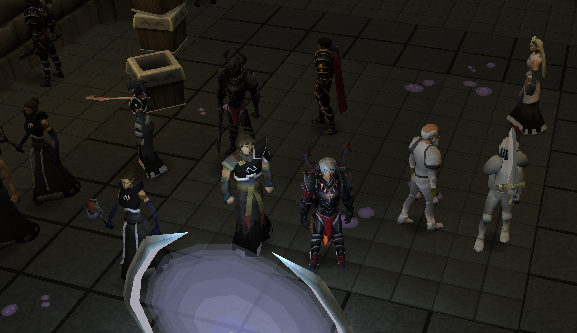 When you arrive through the portal, you're met by Wizard Grayzag, who turns out being the culprit and behind everything. He summons a swarm of nests and runs off. Jessika chases after him and gets captured. 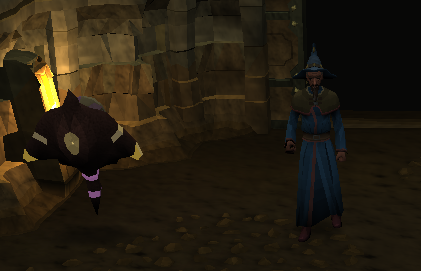 You and the others manage to escape the pests into a cave, where you're then trapped. Luckily, by contacted Savant, you're able to get a squadron of Void Conquest Knights to aid you, where you then have to play a game of Conquest against the pests. Don't worry if you lose, you're allowed to try again. Each pest has different roles, just like each individual in your Conquest squadron. 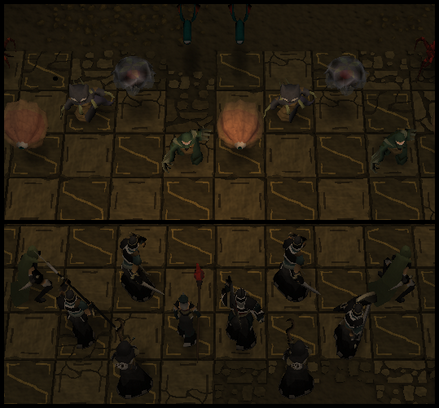 Once you've defeated the pests, you're able to walk through the doorway into the next area. However, you need to get ready to fight the Pest Queen, which Wizard Grayzag is about to summon. The Pest Queen is level 98 and has 50k lifepoints, so be prepared.

Korasi's Sword will be extremely useful in this fight so it's recommended to use the best melee armour available to you. Barrows or GWD armour are good enough if you're a low/mid combat level player. If you have high combat your choice of armour won't be very important, using a set of Void should be more than enough to defeat the Queen. For lower combat players food and potions are recommended as they can help a lot, but they're not necessary for the more experienced players who will likely find this an easy fight.

Note: You can adjust your armour and inventory to suit your needs/requirements. When making adjustments, remember that you want a high Melee or Magic defence.

Combat familiars will help killing the Queen faster, but an Unicorn Stallion or Bunyip can be helpful too for healing purposes.

When you first enter the area in which you'll fight the Pest Queen, you'll be confronted by a cutscene. However, Grayzag presents you with a problem on which you have to decide the outcome: Sacrifice Jessika or sacrifice Korasi in order to summon the Pest Queen? You'll have to choose who. Once you've chosen, Grayzag will kill that person and summon the Pest Queen. You won't be attacked to start off with though. You can talk to Valluta, who is imprisoned near you, about how to kill the Queen, and you can talk to whoever you chose to survive.

Tip: If you lost Korasi's Sword beforehand you can retrieve it off the person you chose to survive. 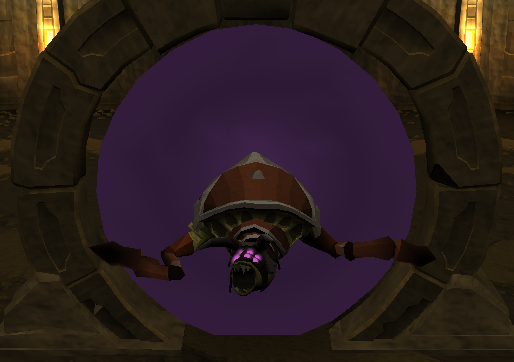 Once you're ready, you can head out to fight the Queen. Korasi's sword is crucial in this battle, as its spec stops the Queen from using her spec. Whenever the Queen stops attacking you and lifts her head, you have a short time to use Korasi's Sword's spec to stop the Queen. The Queen's special attack will deal damage to you and anyone in the vicinity, as well as heal her. Also, the Queen will use her spec almost as soon as you enter the battle. You'll get a warning when this happens, but it is the only time you will be warned about the spec. Pray melee when attacking the Pest Queen. 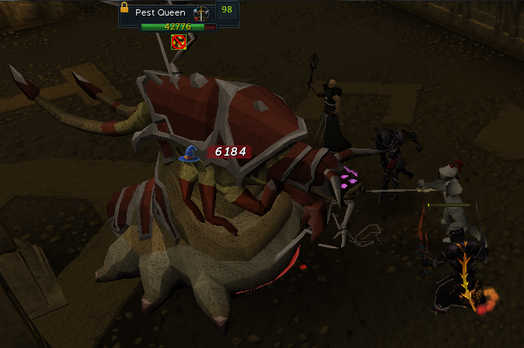 Something else of great importance to remember is that the Pest Drones that appear will heal the Pest Queen. In order to stop them, the Rangers on your side must kill them, as you cannot. To stop the Rangers from dying, you must kill any Elite Defiler that spawns, as it will attempt to kill your Rangers. When doing so, swap your prayer to Protect from Magic/Deflect Magic as you run away from the Queen. It might also be worth noting that the hardest part of the battle is the very start, if you don't know what you're doing. Once you get into a rhythm, then it's not particularly hard to kill the Queen, as long as you keep your lifepoints relatively high in case you miss a special attack.

If you die during this fight, it can be difficult to return to your gravestone in time. However, Sir Tiffy will still be sitting on his bench, in Falador Park. If you speak to him, he will teleport you directly to the room where your gravestone will be. This saves vital minutes and will ensure that you reclaim your items. 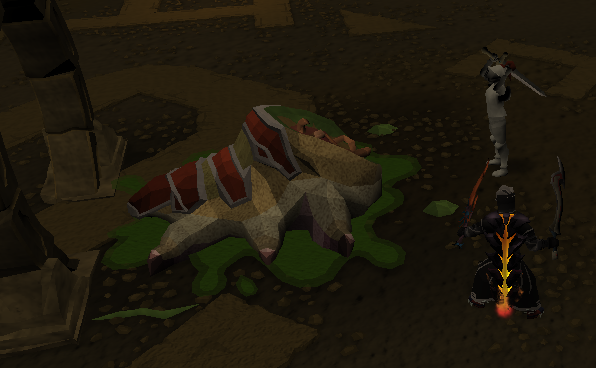 After defeating the Queen head over to Sir Tiffy and co. They have captured Grayzag and are deciding on his fate. Each person has a different view, and they end up looking to you for the final say. Once that is done, speak to Commander Tyr, who will give a rundown on the different choices you made during the questline. He'll give you an elite Void Knight Torso, of which will be a different colour based on the choices you made. Quest Complete! 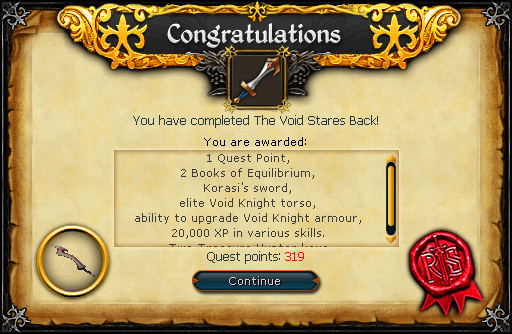 Korasi's Sword is currently the best 1-handed stab weapon, aside from drygore and chaotic weapons. 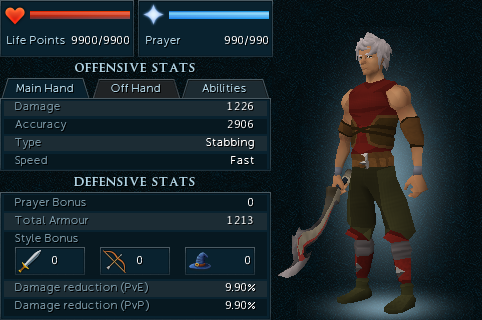 For the cost of 100,000 coins, you can talk to Commodore Tyr after the quest to change the colour of your elite void torso. Also, you can pay 100 commendations to him to upgrade your void robes to its elite counterpart. 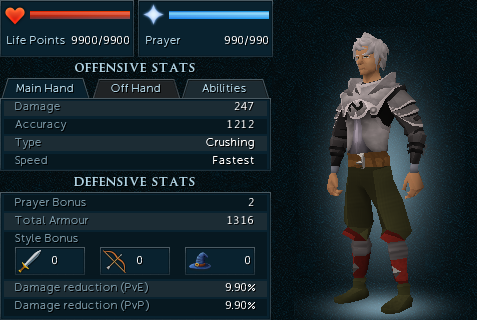