If you are looking for the modern RuneScape guide for this content, please see our Contact! guide.

The High Priest of Icthlarin has problems again - this time with the inhabitants of Menaphos. Sophanem is recovering from the plague, yet most of its citizens are still trapped on the other side of the river. Diplomacy has failed and subterfuge beckons. Clearly, this is the sort of job that a shifty adventurer could excel in.

Begin by speaking to the High Priest of Icthlarin.

Start by speaking to the High Priest in Sophanem. Upon beginning the quest you will hear his story of how he attempted to cross the bridge and was stopped by Coenus who had his archers attack him and others. Ask him if there are any passages under the city. Continue to talk to him and you will find out about Scarabas, Apmeken, and how lesser deities were born every time Tumeken had a dream. Now head to to the Temple of the Lesser Deities in the Northeastern part of the town. Speak to Jex who will tell you that a few months ago Scarab creatures came out from underneath the Temple. Jex will tell you to go down the ladder to the deserted bank and then down the trapdoor using the method you were told.

You will be in the northeast corner of a dungeon similar to the Rogue's Den. Be wary of Scarab Mages and Locust Riders that go all the way up to level 106. The Locust Riders can deal up to 25 damage on you, and the Scarab Mages can deal up to 30 damage on you as well as extinguish your lantern. Traps in this dungeon include floor spikes, moving walls, wall spikes that can hit you for up to 16 damage. As well as that, there are Scarabs which can poison you. 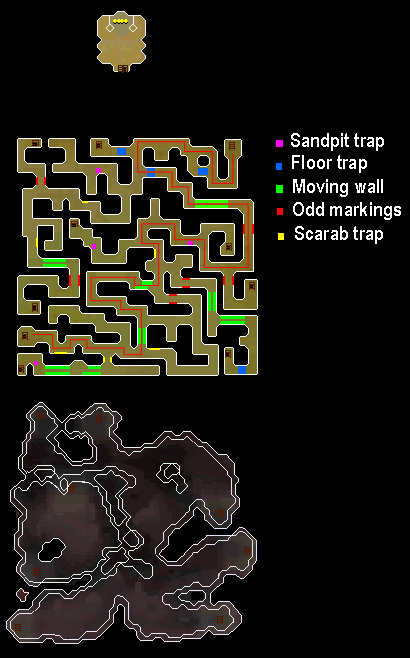 When navigating the maze you will be confronted with five different traps. Three of those will deal damage: The Floor Trap (disabling the trap successfully depends on your agility level) , the Moving tall trap (keep to the opposite wall and at the end move diagonally) and the Odd Markings trap (disabling successfully depends on your thieving level). Getting past them is not that hard. The two other traps are not hard at all: Just keep to the opposite side as you walk past them. Be careful, fail these and you will end up in the dungeon below, and that is the place best to avoid.

Navigating the maze can be done easily when you prepare: Turn off auto-retaliate and when you see one of the 'monsters' use the correct prayer to prevent damage. For the mage obviously Protect from Mage and for the Locust Rider use Protect from Missiles. When you do not turn off auto-retaliate you run the risk of attacking one of them and fall into one of the traps. Even when attacked, concentrate on the trap at hand, once safely past the attack will stop. 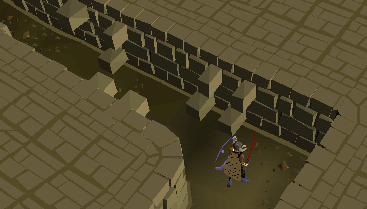 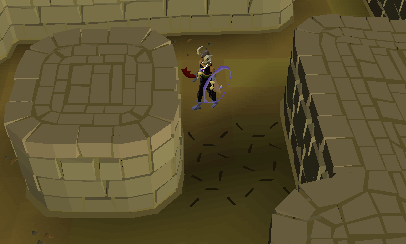 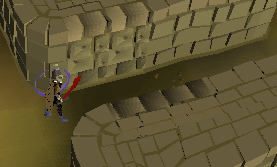 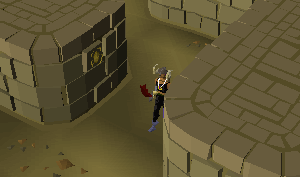 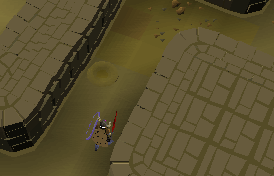 When you enter the dungeon head south, and then west, after that turn north and follow to the top, continue and move west until you see a floor trap. Now head south, and then pass through the floor trap, continue this path avoiding the moving walls by walking on diagonals, then head south towards the bottom of the path. Afterwards move west and then north until the first east path you can take. Take this path, and when you reach a dead end where you can move south, go south, than at the bottom of this head east and than south two more paths before moving west. Follow this path until it branches into two more paths again and than take the south path. At the bottom of this, switch to moving west and go down the ladder.

You should be at an area that looks similar to the Abyss flooded with no monsters. Head north along the passage until you see the body of Kaleef. Search it to get a blood covered scroll.

To the west, across a gap, you will see Maisa, speak with her and she will say you're not Kaleef. Kaleef will ask you if you are a friend of Al Kharid and you will say you helped rescue Prince Ali, however Maisa wants you to tell her where Ali was being kept. Select Draynor Village and he will ask who helped you locate Prince Ali, select Leela, and he will ask you to bring Osman to him. Teleport back to Lumbridge or use a Glory and speak to Osman in Al Kharid outside the Palace Gates.

Tell Osman that his appearance might be a wedge between the two cities. He will meet you outside Sophanem gates so speak with him, Tell him of a secret passage you know of to the northeast, and you will see a cutscene, afterwards it's time to go on an Osman hunting to find him. Head back to where you found Kaleef's body and you will see a cutscene.

Now you need to fight a level 191 Giant Scarab that hits up to 20's attacking with range, and melee often, as well as that it can summon Scarab enemies you have already seen, and poison you. Pray if you find it necessary (which is basically mandatory to be able to survive). 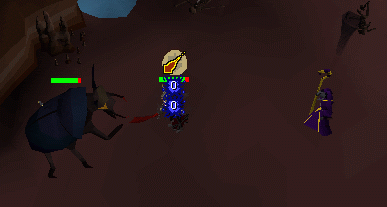 Keris A Lamp which gives you two wishes of 7,000 experience in combat skills other than Prayer. 7,000 Thieving experience. Access to the local bank.

The Keris is extra strong against creatures like Kalphites. 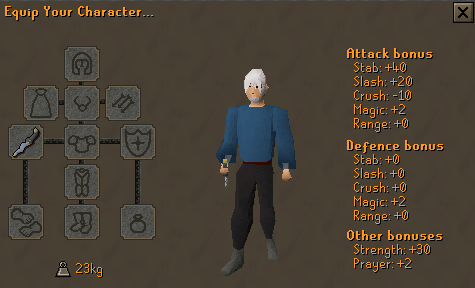 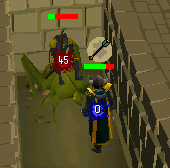