The Trolls have made camp on Death Plateau, and they have begun to attack the city of Burthorpe! Can you help the Imperial Guard fend off these vicious creatures?

If you are looking for the modern RuneScape guide for this content, please see our Death Plateau guide.

Trolls have come down from the north and are camped on Death Plateau. They are using this base to launch attacks on the principality of Burthorpe!

The Imperial Guard is taking heavy losses. They need your help!

Begin by speaking to Denulth in the village of Burthorpe. 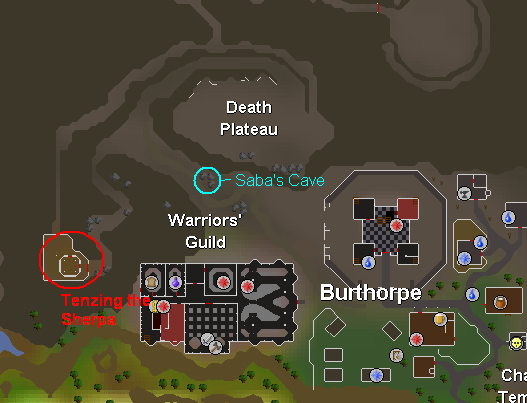 You can start off by heading to the village of Burthorpe, just north of the Heroes' Guild. Talk to Denulth, who should be inside of a small building south of the group of training soldiers. Ask him if he has a quest, and he says that Trolls have taken over the training area on the Death Plateau and have been launching attacks on the village. He mentions that a guard has lost the combination to the the lock on the supply room, and he needs to find another way to the plateau.

Speak to Eohric, the man upstairs in the castle of Burthorpe. 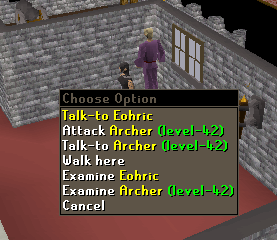 He tells you that the soldier that was on duty last night is staying at the Toad & Chicken Inn, just south of the castle. Go upstairs in the Inn and knock on the door to the far side of the room. Harold should be in there, so talk to him about being the guard on duty the night before. He doesn't want to talk, so go back to Eohric since he seems to know about the soldier.

Eohric mentions to you that you could buy Harold a drink. Head back to the inn and buy an Asgarnian Ale or 2 from the bartender, and then ask Harold if you could buy him a drink. 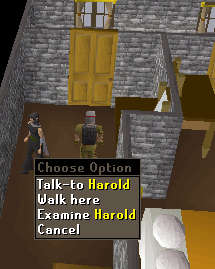 After he has a drink, ask him about the combination again, which he says that he has no idea where it may be. He should say that he wants another drink, but this time when you ask him if you can buy him one, he says that he wants a Blurberry Special, which can be bought from the Gnome Stronghold bar for around 32gp. Bring it back to him and ask if you can buy him a drink (again).

After he has a taste of it, he gets extremely drunk. Now you can gamble him and not have to worry about loosing a single GP... because he can't seem to see straight. After you gamble for about 130gp, he will give you an IOU.

When you read it you realize that the combination is on the back! 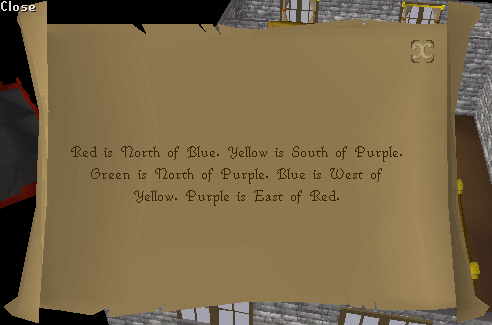 The puzzle you need to solve by reading the combination is inside of the castle, and you must place the stone balls in the correct position. You can see the completed puzzle by clicking here.

North of the the group of soldiers near Denulth's tent is a dirt road, which you can follow until you reach a cave on the side of the mountain. Go inside and talk to the man named Saba. Ask him if he knows another way up to the Death Plateau, and he says that a sherpa that he has seen around may know another way to get up there.

Follow the path northwest until it ends, and then head west until you find a small hut. Knock on the door and go inside, and then speak to Tenzing. He tells you that he knows a secret way up the plateau, but he needs you to get him a few things. He needs 10 Loaves of Bread, 10 Cooked Trout, and some new Spiked Boots. The bread and trout can be bought or cooked.

To get the Spiked Boots, talk to Dunstan, the smithy located in the northeast part of town. He will make them for you, but you need to get his son into the Imperial Guard. He will also need an Iron Bar. Now visit Denulth and tell him the situation, and he will give you a Certificate saying that Dunstan's son is in the Guard.

in exchange for them. Behind his house is a small pen. Climb over the Stile and follow the twisting path North, and then East until your character says that you've gone far enough.

Now you can go back to Denulth to collect your reward!

3,000 Attack experience The ability to smith Claws. You can buy a pair of Climbing Boots from Tenzing for 12gp each so that you can journey further up the mountain. If you bring an Iron Bar and the boots to Dunstan, he will make them into Spiked Boots.