If you are looking for the modern RuneScape guide for this content, please see our Enakhra's Lament guide.

Lazim the sculptor has a sad tale to tell - his days of making art are over, and now all he can do is carp at adventurers as they make a statue for him in the desert. Although, isn't just south of the Bandit Camp an odd place to be putting up a statue?

Help Lazim out with his artistic endeavours, and learn more as this quest goes deeper into the history of RuneScape than you might expect.

Begin by speaking to Lazim, found south of the Desert Bandit Camp.

To start this quest, talk to Lazim, who can be found just south of the Kharidian Bandit Camp, near the quarry. He'll ask you to make a new statue for the kings. Now head to the southwest of Lazim, where there will respawn a bronze pick axe, so you can get your rocks. You'll need to mine 32kg of Sandstone. When your inventory is full, you can bring the mined sandstones to Lazim and he will hold them for you.

There are four kinds of sandstone: 1kg, 2kg, 5kg and 10kg. When you have all 32kg, talk to Lazim again, and he'll give you a 32kg Sandstone block. Now use a chisel on the Sandstone, to get a Sandstone Base. Head to Lazim again, and put the base on the Flat Ground next to him. You'll need another 20kg of Sandstone to make his body. When you've put the body on the base, use your chisel on it. Now speak to Lazim again and pick a head, it doesn't matter which one (but you can't pick your head!). 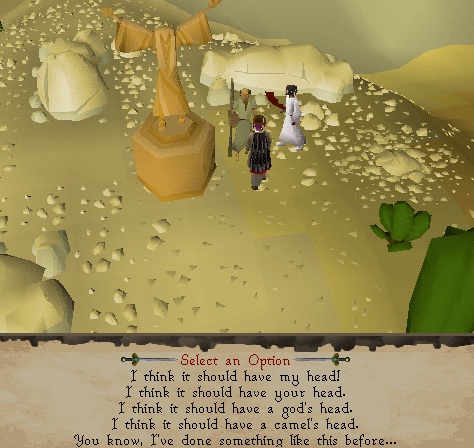 Now find a 5kg piece of granite, and use your chisel on it to make the same type of head as before. Put it on the body, and you'll fall into a hole.

Now, head west with all the logs (maple, willow, regular and oak), a coal ore, a lit candle and a tinderbox. Open the door by using a Sigil on it (to work out which sigil to use, look at the letter and chose the sigil of the same letter) and go up the ladder. Head east there, and you'll find yourself in a "misty dark place" with brazier's. Now, investigate them, and put the right log into the right brazier. When you're done, go back to Lazim, and ask him for advice. Now go up the ladder near him and climb over the sandpile. Then go back and quarry a 5kg piece of granite. Then climb down the secret entrance. Use some soft clay with the pedestal. Now make a stone head by using a chisel with the granite. 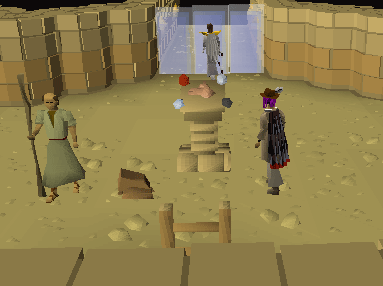 Go up on the room, and cast a crumble undead on the Bone Guard. The Bone Guard drops 5 Big Bones. Take them, and go over to the bone pile. 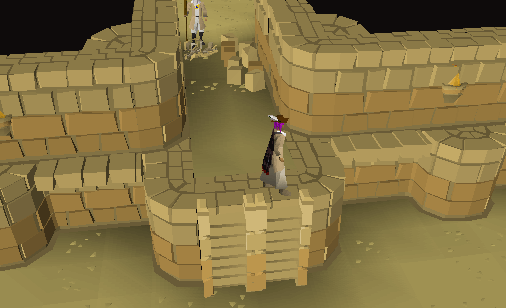 Now, go down the stairs and speak to the bone guard with your protect of melee on, and say you'll help him. Now you'll have to rebuild the wall, by getting sandstones which can be found by searching the Pile of Rubble in the room.